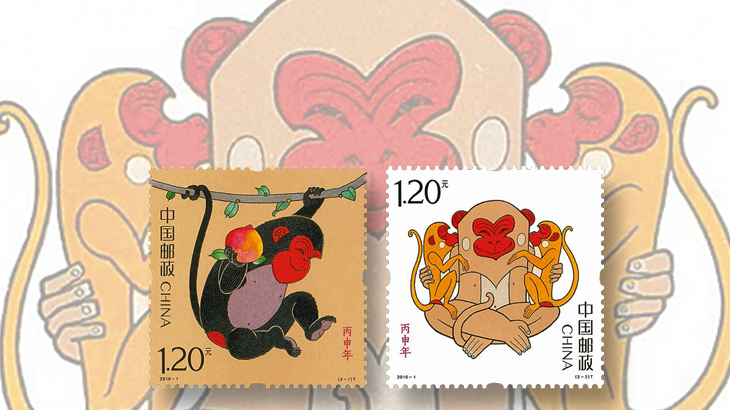 Two of the new stamps issued by China in January show illustrations of cheerful monkeys to celebrate the coming Year of the Monkey. One stamp shows a parent monkey with two children, an apparent nod to a recent revision in China’s one-child policy.

China issued three different stamps in January welcoming the new year and recognizing the Year of the Monkey as identified in the traditional Chinese zodiac.

Something that’s caught the attention of collectors and international news reporters, however, is the fact that one of the stamps portrays an adult monkey holding two baby monkeys who are each giving the adult a kiss on the cheek.

A CNN news article by Jessie Jiang and Pamela Boykoff published Jan. 6 points out that the new stamp comes only days after the country officially ended its decades-old one-child policy.

China enacted restrictions on family size in 1980, generally limiting families to a single child in an effort to curb the nation’s population growth. Exemptions allowing two children under certain circumstances were enacted a few years later, and expanded earlier in this century.

China’s Xinhua news agency reported recently that a revised policy announced by the Communist Party of China will allow all couples to have two children effective Jan. 1.

Xinhua reported Oct. 29 that according to an issued communique, “The change of policy is intended to balance population development and address the challenge of an ageing population.”

In an announcement for its new Year of the Monkey stamps, China Post broached the subject of family with regard to the new two-child stamp, stating: “One of the stamps depicted a cute monkey holding a peach with one hand whilst clinging to a tree branch, signifying the delivery of luck. Meanwhile, the other was covered with an adult monkey holding two babies by the hand, which conveys public’s expectations regarding family harmony and longevity.”

The Year of the Monkey stamp designs were created by artist Huang Yongyu and engraved by Zhao Chuan and Ma Rong. The stamps were printed by Beijing Stamp Factory.

The web portal China.com reported Jan. 7 that the stamp artist conceived of the design with the new “second child policy” in mind.

The new 1.20-yuan stamps were issued Jan. 5 in panes of 16 each, and are also found in a folded pane of 10 consisting of five stamps of each design.

The Year of the Monkey begins this year on Feb. 8.

This Greetings stamp is also denominated 1.20 yuan. It was issued in a pane of 20, and in a pane of eight consisting of two blocks of four stamps with decorated selvage showing children holding strings of firecrackers.

The designer of the New Year’s Greetings issue is Wu Guanying.

Additional information about China’s new stamps can be found on the China Post website, or by contacting China Post, No. 3 Financial Street, Xicheng District, Beijing, China.