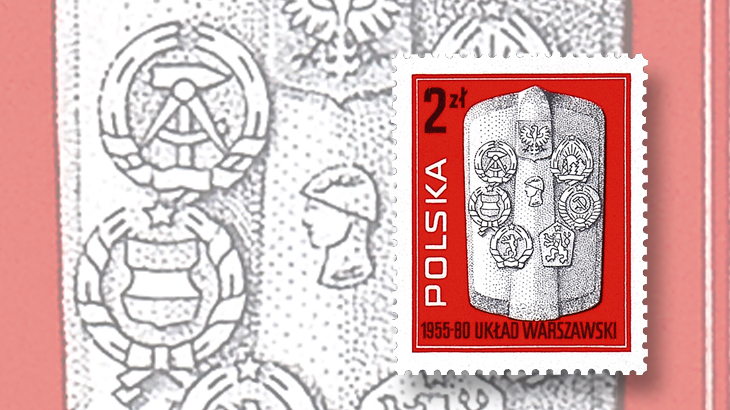 The 25th anniversary of the signing of the Warsaw Pact, which created the military alliance of the Eastern Bloc nations, was marked by a stamp issued on May 14, 1980. 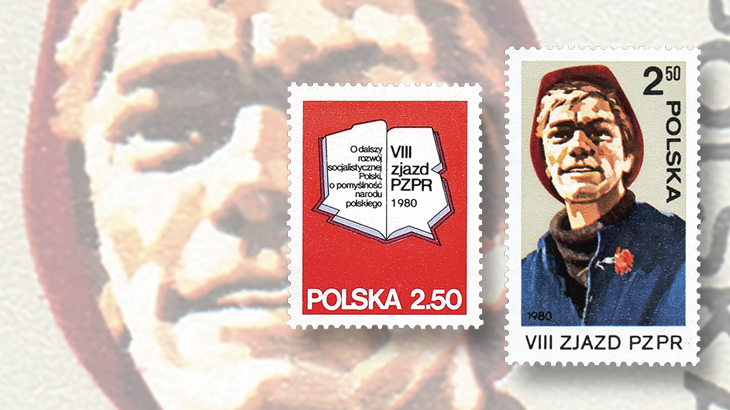 The two stamps marking the 8th Congress of the communist Polish United Workers’ Party in February 1980. The first, above, has the party slogan, “For the continued development of socialist Poland, for the well-being of the Polish nation.” The second stamp, 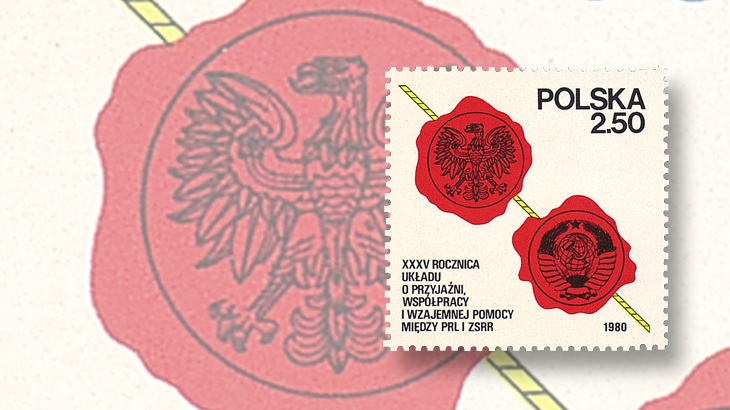 The April 21, 1980, stamp for the 35th anniversary of the Treaty of Friendship, Cooperation and Mutual Assistance between Poland and the USSR. 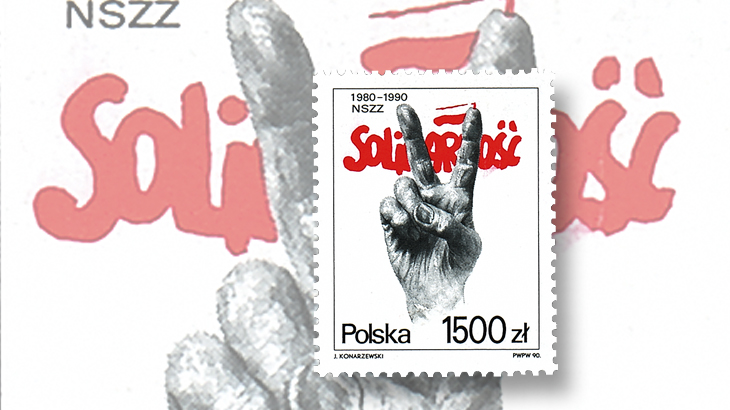 This stamp issued Aug. 31, 1990, celebrates the 10th anniversary of Solidarnosc, the people’s free trade union, and its role in Poland’s triumph over communism. 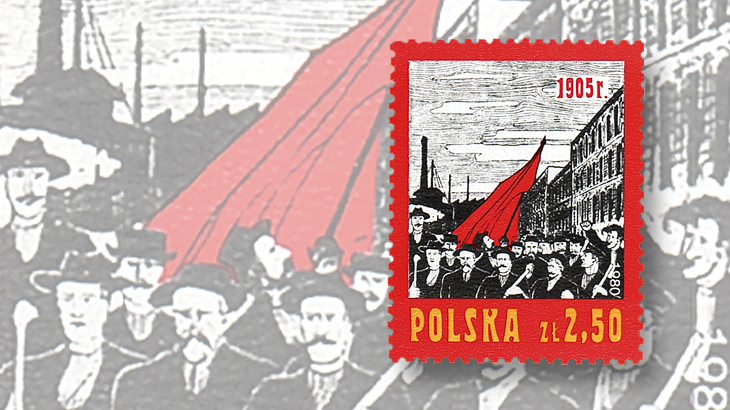 A stamp for the 75th anniversary of the Revolution of 1905 depicts workers marching with a red flag. 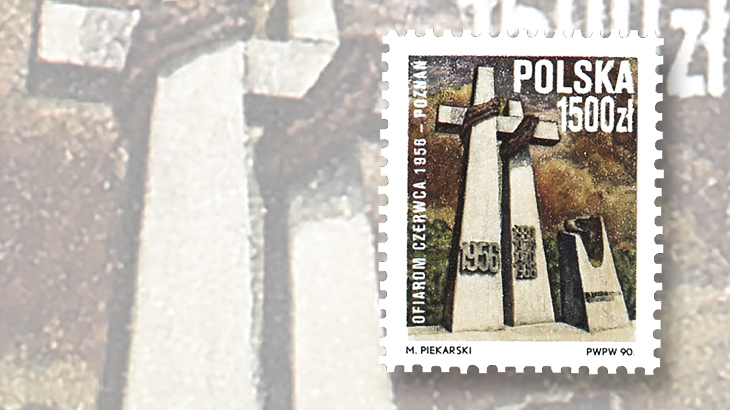 A memorial built in 1981 to honor victims of the 1956 uprising in Poznan appears on a 1990 stamp. This design would have been forbidden under communist rule. 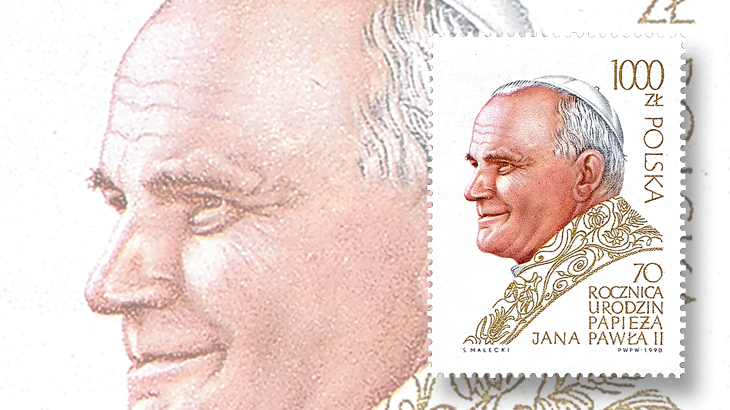 In 1990, Polish stamps were able to abandon the communist party line for the first time in decades. Native son Karol Wojtyla, Pope John Paul II, was honored with a stamp on May 18 for his 70th birthday. 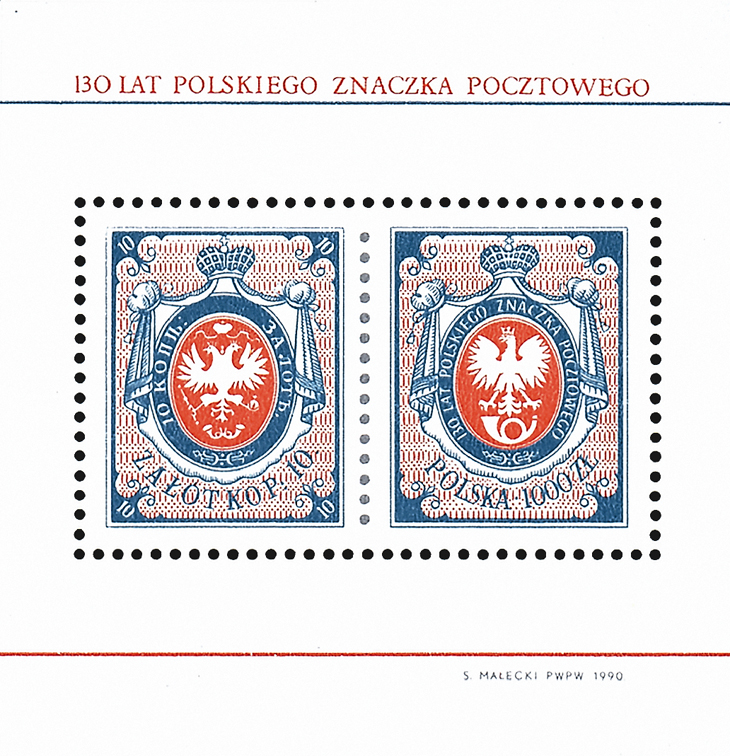 The souvenir sheet issued by Poland on May 25, 1990, is significant in portraying the Polish eagle again topped with a crown, a nationalist pairing that had been forbidden under communism. 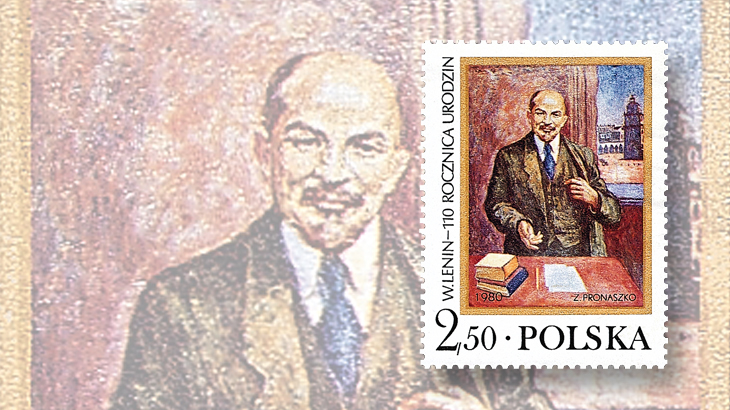 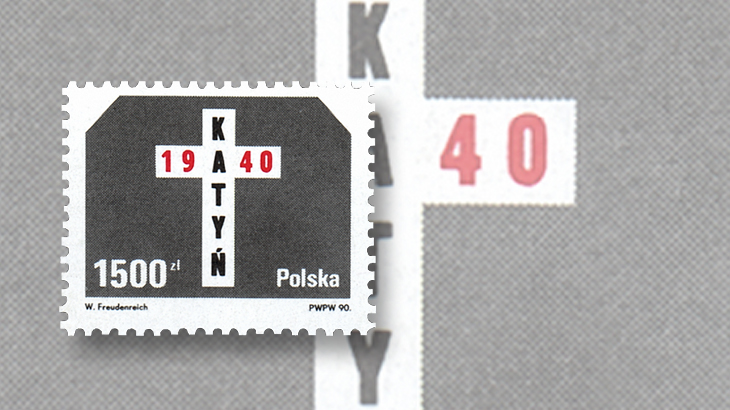 The 50th anniversary of the Katyn Forest Massacre, a mass execution by Soviet secret police in 1940, is memorialized on a stamp issued July 20, 1990, by Poland. The massacre had long been denied by the Soviets. 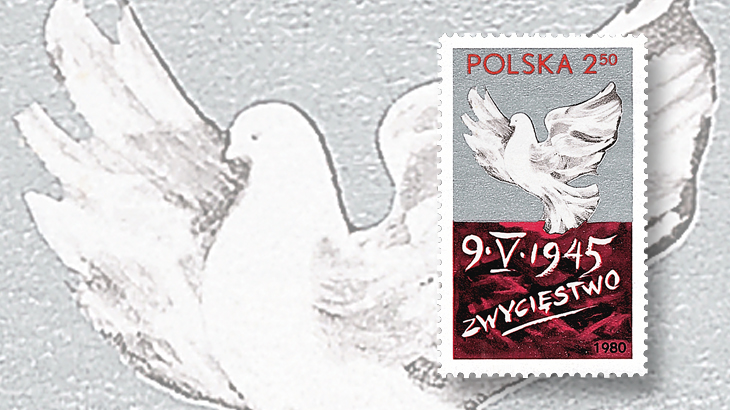 A dove of peace flew over the date of May 9, 1945, on a 1980 stamp celebrating victory day over Nazi Germany.
Previous
Next

Who’s up and who’s down in the politics of a nation is often reflected in the choices made for the subject matter of commemorative stamps. This dynamic is particularly evident in stamps issued in Poland in 1980 and again in 1990.

The year 1980 marked the end of a decade of unmitigated disasters for the Polish United Workers’ Party (PZPR), the communist party that had controlled Poland since shortly after World War II.

Party leader Edward Gierek’s attempt to fix a failing economy had resulted in massive debt to the West, but had failed to end the poor living conditions that sparked unrest among Poland’s working class.

The election of Polish-born Karol Wojtyla as Pope John Paul II and his visit to Poland in 1979 further bolstered the population’s dissatisfaction with the government.

In the late 1970s, strikes erupted along the Baltic coast in the influential shipbuilding industry, and out of the turmoil arose the independent trade union Solidarnosc (Solidarity). In 1980, Gierek fell from power, replaced by Stanislaw Kania, who attempted party reform to placate the workers.

Once legalized, however, Solidarity quickly spread throughout the country and shifted the center of political power in Poland until the declaration of martial law put an end to the union’s legal status.

It is against this incredible backdrop of social and political chaos and transformation that the subject matter of the commemorative stamps of 1980 must be evaluated.

The PZPR wanted the stamps to reflect a long-standing status quo — that is, the party firmly in control and guiding the nation — but it was a status quo that was fast changing.

The first stamp carries a party slogan, “for the continued development of socialist Poland, for the well-being of the Polish nation.” The second stamp shows a smiling, hard-hatted worker with a carnation, a symbol of socialism and the labor movement, stuck through a buttonhole in his work shirt.

Of course, by 1980, economic woes made party slogans seem both laughable and cynical to most Poles, and ironically it was the real-life equivalent of the worker portrayed on the stamp who was marching in the street, supporting Solidarity and calling for the end of monolithic party control.

Another status quo of Polish life, the Russian Soviet control over Poland and the other USSR satellite nations, is recalled on Scott 2385, issued April 21, 1980, and commemorating the 35th anniversary of the Treaty of Friendship, Cooperation and Mutual Assistance between Poland and the Soviet Union.

On May 14, Scott 2389 was issued to mark the 25th anniversary of the signing of the Warsaw Pact, which officially created the military alliance of the Eastern Bloc nations.

The communist/socialist theme was also expressed with Scott 2386 (April 22, 1980), which pictures a benign, smiling Vladimir Lenin and commemorates his 110th birthday anniversary.

Scott 2387 (May 1) depicts workers marching with a red flag in the Revolution of 1905, and Scott 2388 (May 9) proclaims that date in 1945 as victory day over Nazi Germany. (Moscow time placed victory day in the Soviet Union on the May 9, whereas the other Allies celebrate the occasion on May 8.)

All three stamps would have reminded Poles of the intricate links between the Polish and Russian nations.

By 1990, the rear-guard action the communists were fighting to maintain control in Poland was over. Gorbachev had unleashed the forces of glasnost (openness) and perestroika (reformation) and the Soviet Union was headed for breakup in 1991.

In Poland, the communist government had collapsed, former shipyard electrician Lech Walesa had become president, and the Sejm, Poland’s parliament, had voted in December 1989 to end the leading role of the party, restore the name and symbols of old Poland and institute a market economy.

Thus, the choice of subject matter for stamps issued in 1990 was out of the control of the party for the first time since shortly after World War II.

Rather than pushing the party line and endlessly reminding Poles of how seemingly inextricably linked were the Russian and Polish nations, stamps could now be used to reflect the popular will — and also to settle some old grievances.

Scott 2966, issued on May 18, 1990, honors the 70th birthday of Pope John Paul II, who had emerged as a leading figure in the transition of the Polish state and the collapse of communism.

This stamp was followed on May 25 by a souvenir sheet (Scott 2967) depicting the first Polish stamp coupled with a 1,000-zloty commemorative version of the stamp.

What’s significant about this commemorative stamp is that it shows the Polish eagle topped with a crown. In communist Poland, the eagle had been retained as a national symbol but the crown had been stripped away.

Three stamps issued later in 1990 took on subjects that had been forbidden in the communist era. Scott 2971 (June 28) shows the monument in Poznan erected in 1981, when Solidarity temporarily held sway, commemorating the deaths of protesting workers at the hands of Polish militiamen in June 1956. Poles had long considered this incident a betrayal of the Polish nation by the party.

An even more inflammatory subject was addressed on Scott 2975 (July 20), marking the 50th anniversary of the Katyn Forest Massacre. The stamp shows the critical date “1940” in red lettering across the bar of a Christian cross.

The Soviets had long maintained that this massacre of thousands of Polish military officers and civilians had been the work of the Nazis, but the location and timing of the event had always definitively shown that the Soviets, under cover of war, carried out the mass executions of captured army officers, police and thousands of individuals considered undesirable “intelligentsia.”

Finally, Scott 2982 (issued Aug. 31, 1990) triumphantly celebrates the 10th anniversary of Solidarnosc, with a design of the iconic symbol of a hand with two fingers raised in the “V” for victory sign, superimposed over the familiar logo of the trade union.

The stamp marks the final victory of the people’s free trade union over the long-ruling communist party in Poland.

Subsequent years saw Poland joining the European Union and NATO, bringing the country full circle from economic and military alliances with the Soviet Union to becoming part of the very organizations in the West that were in opposition to the USSR.

The history is all right there in the stamps.