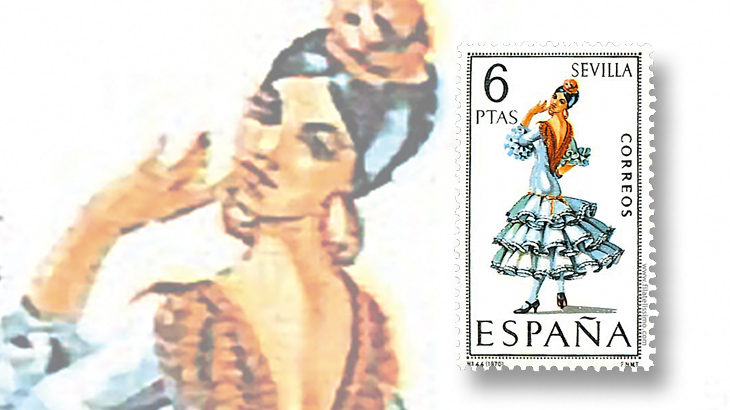 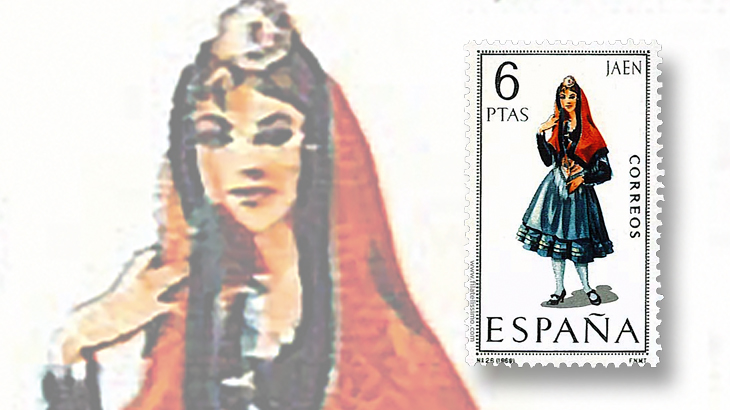 The stamp for Jaen provincial costume, issued in 1969, reflects many of the historical cultural influences on that part of Spain. 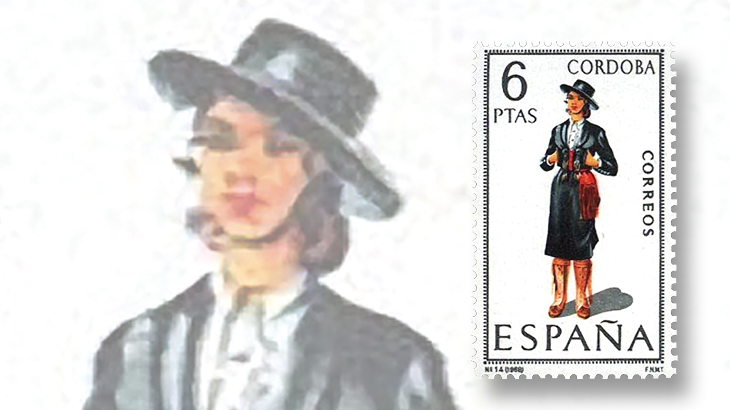 Looking surprisingly modern, this historic regional costume, on a stamp issued in 1968, is from the province of Cordoba. 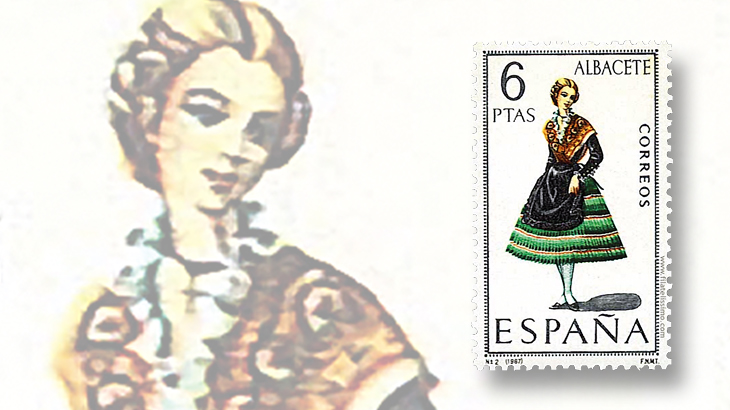 Traditional garb of Albacete, in southeastern Spain, was featured on the second stamp of the Regional Costumes series, which comprises stamps issued in alphabetical order by region. 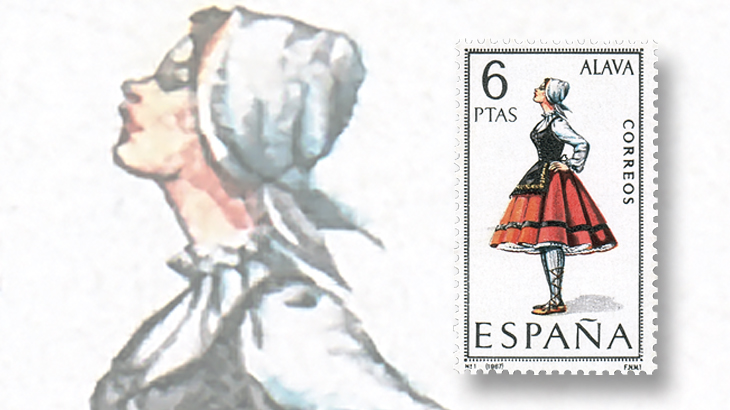 This stamp of Jan. 14, 1967, showing a costume of Alava province, launched a series of 53 stamps dedicated to Spanish traditional regional dress. 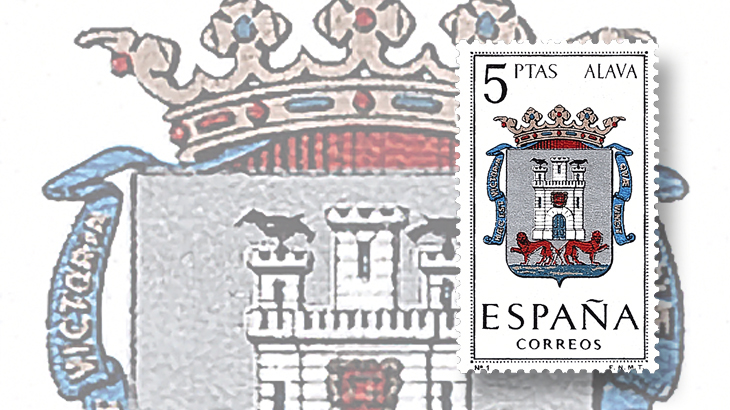 The first of a lengthy series of stamps showing coats of arms of Spain’s provinces honored Alava, in the Basque Country region, in 1962.
Previous
Next

With the exception of 1971, there were 12 Regional Costume stamps issued each year. In 1971, the final year for the Costumes series, five stamps were issued from January to May, bringing the entire series to a whopping 53 stamps.

The series began on Jan. 14, 1967, with a stamp (Scott 1392) depicting the traditional costume of the province of Alava, which lies within the region of Basque Country in northern Spain. The second stamp in the series (1393) was issued Feb. 13, 1967, and illustrates a costume from Albacete, in the southeastern region of Murcia.

By now you may have figured out the pattern: the stamps were issued alphabetically by name of region or province, beginning with Alava and ending with Zaragoza.

Arranging the stamps alphabetically in albums or stock books is quite simple. To really speed things up, get out your favorite magnifying glass and look in the lower-left corner of the stamp, where you will see the number giving the order in which the stamp was issued and the year.

Organizing the stamps by region is slightly more work but gives a better grasp of the provinces as well as the garments. The best way to plan that organization is to make a spreadsheet for the 53 stamps, containing the catalog number, the order-of-issue number found in the bottom-left corner, the province, the region and the issue date. Once completed, the sheet is a quick reference to consult when you’re organizing the stamps.

It pays to delve into the history of each of the regions and provinces, to better understand and appreciate the costumes. For example, Andalusia is the southernmost region in Spain. It has eight provinces: Almeria, Cadiz, Cordoba, Granada, Huelva, Jaen, Malaga, and Seville. All eight of the provinces have Costume stamps. By arranging the eight stamps together, you might find similarities among some and divergent appearances as well.

Let’s take a look at Andalusia, which is noted for its flamenco dancing, bullfighting, and Moorish heritage. The province of Almeria lies along the Mediterranean Sea on the southeast coast of Andalusia. Compare three of the costumes from provinces within Andalusia and you will find quite a variety of dress. Cordoba’s costume, on Scott 1405, issued in 1968, has an appearance not unlike a business suit that a modern working woman might wear.

The woman shown on the Seville stamp (Scott 1435, issued in 1970) wears a beautiful flamenco gown, and the costume from Jaen (1417, issued in 1969), in Andalusia in southern Spain, reflects many of the contributing cultures of the country, including ancient Iberians, Carthaginians, Romans, Moors, and Visigoths, to name a few.

To enhance your understanding of Spain’s regions and provinces, consider including another series with your regional costumes set: an earlier Spanish set of 57 stamps from 1962-66. If you like heraldry and learning the meaning of each element of a coat of arms, the Provincial Arms series is for you.

The final illustration here shows the provincial arms of Alava (Scott 1045, issued in 1962), which by now you know is a province in the Basque Country region. The Provincial Arms stamps were issued according to the same pattern as the Regional Costume stamps were later on: that is, alphabetically by province, one stamp each month from January 1962 to October1966.

Each stamp has a tiny number indicating its order in the series and the year the stamp was issued in the lower-left corner. The issues of both the provincial arms and regional costumes series have the letters “F.N.M.T.” in the lower-right corner. The initials stand for Fabrica Nacional de Moneda y Timbre, indicating that the stamps were produced by the national mint for currency and stamps.

Collect just the Costumes or the Provincial Arms, or intermingle both series to learn a lot about Spain’s history and geography. It is an inexpensive venture to Spain.