When American history and culture are featured on world stamps: U.S. Stamp Notes 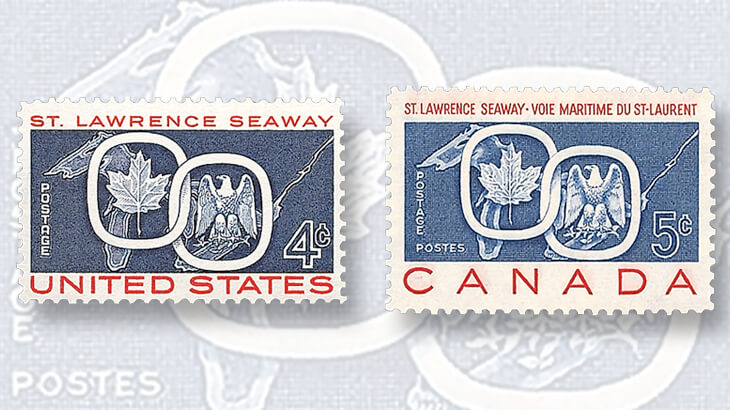 Joint issue collecting, where two or more countries issue stamps with almost identical or similar designs, is a popular collecting area. The United States and Canada jointly celebrated the 1959 opening of the St. Lawrence Seaway. 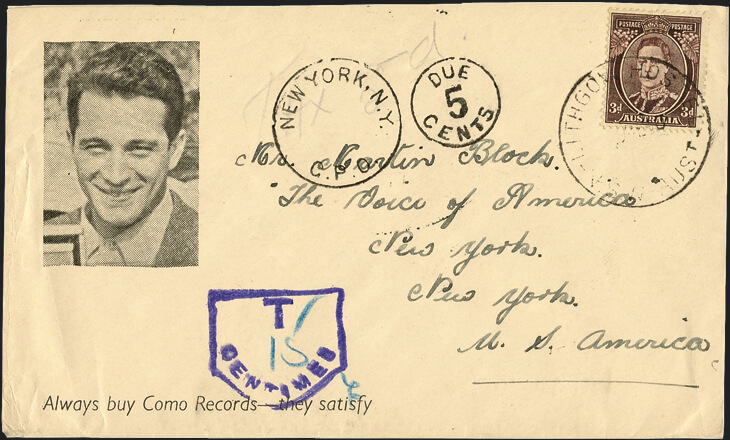 Perry Como is featured on this Australian advertising cover. 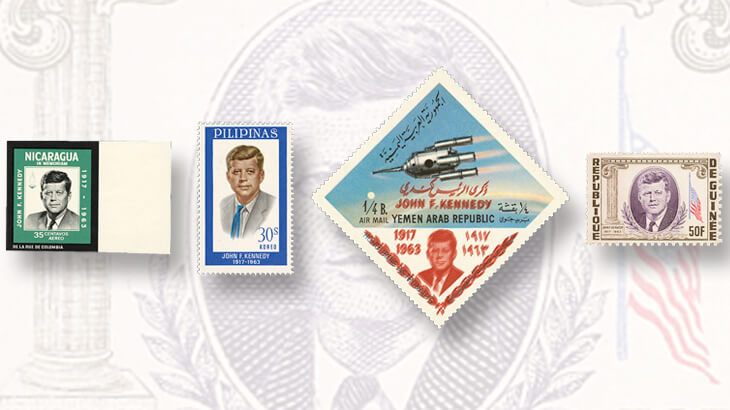 These foreign stamps honoring President John F. Kennedy are all flawed: the Nicaragua is imperf, the Philippines stamp has a shifted tie, the Yemen stamp has a doubled Kennedy, and the Guinea stamp has the blue field of stars in the flag as ultramarine. These were possibly released as varieties with the objective of making extra money from collectors. 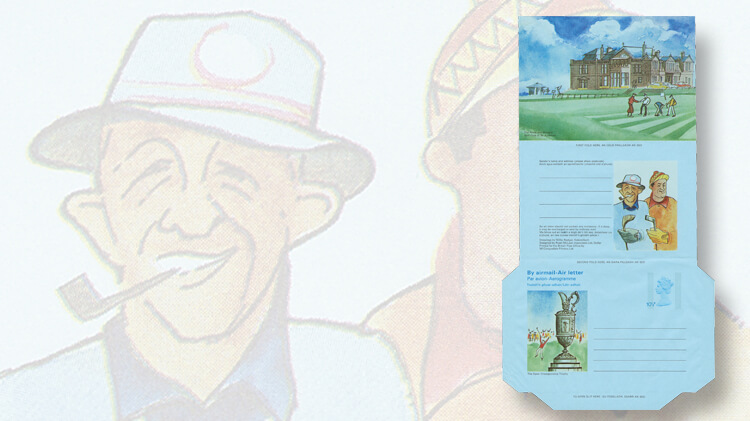 Caricatures of Bing Crosby and Bob Hope, who were both avid golfers, are pictured on this British aerogram that publicizes the St. Andrews golf tournament in Scotland. 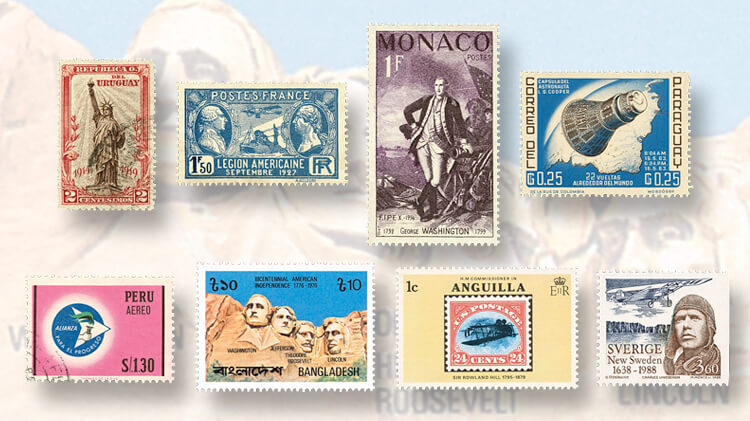 Americana is a collecting field that focuses on foreign stamps and postal items that portray Americans or American theme content. The stamps shown here were issued by (clockwise from top left) Uruguay in 1919 to commemorate peace at the end of World War I, by France in 1927 to mark the visit of American Legionnaires, by Monaco in 1956 to honor the Fipex stamp show, by Paraguay in 1963 for Project Mercury, by Peru in 1964 for the Alliance for Progress, by Bangladesh in 1976 for the American Bicentennial, by Anguilla in 1979 in remembrance of Rowland Hill, and by Sweden in 1988 for the 350th anniversary of New Sweden.
Previous
Next

American history and culture have a worldwide reach, and it is no surprise that they are featured on stamps and other postal products of many countries.

While no doubt some of these stamps were issued with the objective of raking in long green from American collectors, that isn’t true of all.

Likely most collectors have run across such stamps. They are not hard to identify because they feature presidents engaged in head-of-state visits, or were issued in memory of U.S. presidents.

Many of the world’s nations issued a stamp or a set of stamps to commemorate President Franklin D. Roosevelt after he died in 1945.

Also, President John F. Kennedy was the subject of a great many stamps, sets, souvenir sheets, overprints, and commemorative covers after his assassination in 1963.

By that time, the revenue-producing aspect of stamp-design content had come to the attention of most of the world’s postal administrations.

The result was that larger stamp sets were the rule, showing not only President Kennedy but also members of his family. Plus, perforated and imperf souvenir sheets, sometimes with overprints and surcharges, and even limited edition (likely intentional) errors were part of the challenge for JFK collectors.

American accomplishments in space have been commemorated on many stamps issued by other countries. Such stamps normally show astronauts, space vehicles, and/or images of moon landings.

Some of these space stamps are joint issues with Russia, celebrating cooperation in space exploration.

The area of joint issues is a fertile field, with two or more countries celebrating lengthy periods of friendship, diplomatic relations, contributions to society of people with connections to both countries, and joint projects.

American participation in international organizations, and in regional or bilateral treaty arrangements, has been specifically acknowledged on stamps.

Under the category of history, there was worldwide recognition of the 200th birthday of the United States in 1976, and it is likely that something similar will happen on the 250th anniversary in 2026.

Many nations where the United States sent troops or aid in time of war or national disaster have marked these events with stamps. The Peace Corps, the Alliance for Progress, and other U.S. peacetime projects also have been honored.

And then there is culture: movies and movie stars, singers, works of art, books, sports stars, and more.

In addition, American themes  appear on other philatelic products.

For example, shown nearby are Perry Como on an Australian ad cover, and Bob Hope and Bing Crosby as golfers on a British aerogram highlighting golfing at St. Andrews in Scotland.

If Americana is an area that interests you, there is an excellent resource: the Americana Study Unit of the American Topical Association.