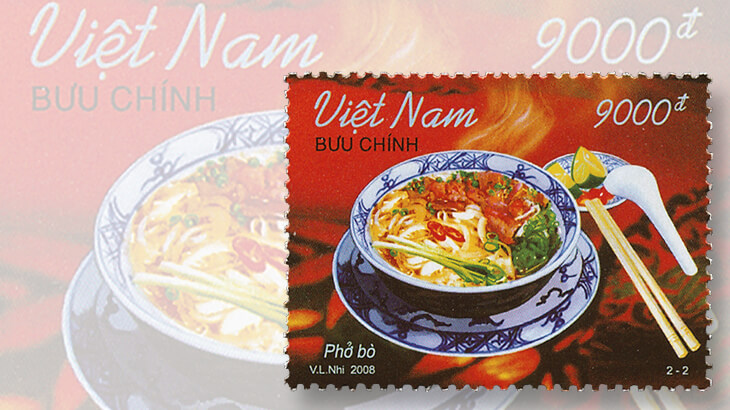 This Vietnamese stamp issued in 2008 features pho, a traditional beef noodle soup that is popular in the United States. 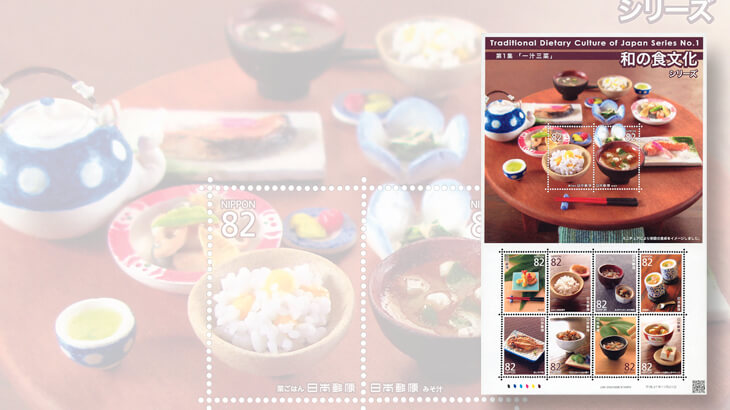 This pane of 10 Japanese stamps issued Nov. 24, 2015, is the first entry in the Traditional Dietary Culture of Japan series. Japanese cuisine represented on the designs of these 82-yen stamps includes shrimp tempura, miso soup, egg custard, rice, and nara 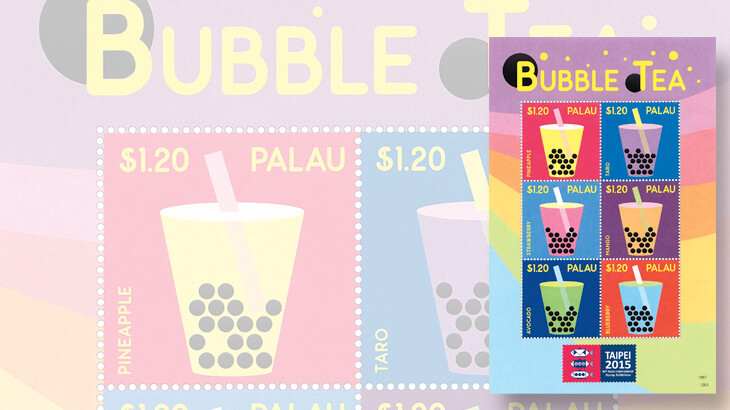 The Taiwanese creation bubble tea is pictured on this pane of six stamps issued by Palau to commemorate a stamp exhibition in Taipei. Bubble tea comes in various fruit flavors, such as pineapple, strawberry, and lychee. This drink is usually made by mixin
Previous
Next

In recent years, local and international cuisine have been making more appearances on postage stamps. Asian cuisine is no exception.

Asian cuisine is widely popular and diverse in the United States and Canada, thanks to the many Asian restaurants in these countries.

Among the most internationally well-known Asian dishes are those from Japan.

The first pane of 10 stamps in this series (Scott 3964) features various Japanese dishes and side dishes, including miso soup, shrimp tempura, steamed egg custard, and seaweed.

Also pictured is narazuke: vegetables such as cucumbers fermented in the yeast of sake (Japanese rice wine). This fermentation gives the vegetables a tangy taste while retaining their crispiness.

A famous Asian drink that has been popularized in the United States in recent years is bubble tea, which originated in Taiwan.

Bubble tea is found in specialty shops and cafes throughout North America. It is sold in various fruit flavors, usually in the form of a powder, that are mixed with a cold green, black, or milk tea base.

The “bubbles” in bubble tea are chewy balls of tapioca that are enjoyed as the tea is sipped through a thick straw. The straw is punctured through a plastic covering that is sealed over the top of the plastic drink cup using a special machine.

Custard pudding or jelly can be substituted in place of the tapioca balls.

Bubble tea also can be blended with ice to make a smoothie. Less commonly, it can be served hot.

Another type of Asian cuisine that is popular in the West is Vietnamese food.

One of the most famous Vietnamese dishes is pho, a hearty noodle soup with various cuts of beef, such as tripe and brisket, usually cooked in a beef broth and served with bean sprouts and basil leaves.

Typically, the noodles in pho are rice noodles, but egg noodles can be used as well.

The condiments of lime, chili, and plum sauce can be added to this Vietnamese dish to enhance its flavors and add spiciness.

The mouthwatering selection of Asian cuisine on stamps presented here is only a sample, but represents some Asian food and drink best known to international diners.

Equally delicious dishes that most Americans are familiar with, including the Westernized Chinese dishes of sweet and sour chicken and honey walnut prawns, have yet to make an appearance on stamps.