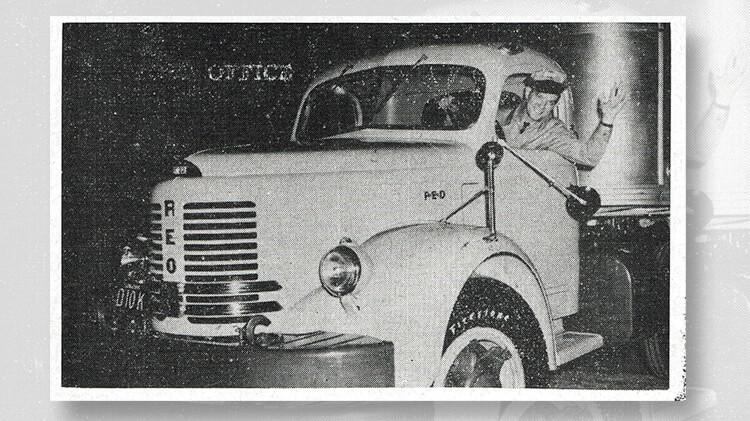 Stamp designs develop over time, as this original photograph testifies. It is the model on which the design for the Trucking Industry stamp of 1953 was based. The 3¢ stamp commemorates the 50th anniversary of the trucking industry. 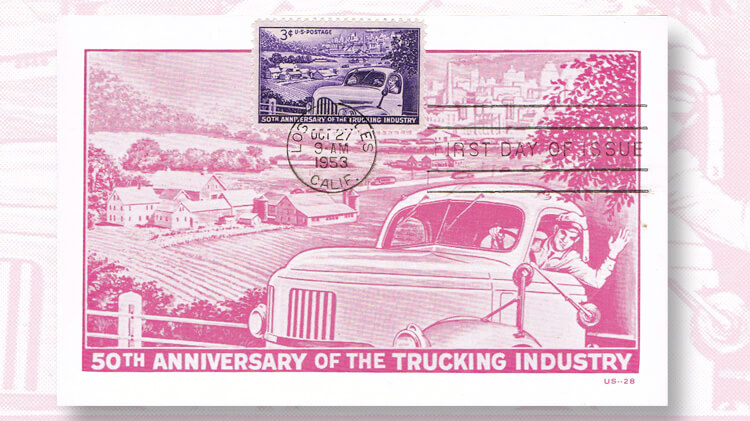 This first-day postcard shows an intermediate design for the Trucking Industry stamp. The truck has been altered so that no truck manufacturer would gain a competitive advantage from the issuance of the stamp, but the form of the driver is faithful to that in the original photograph. 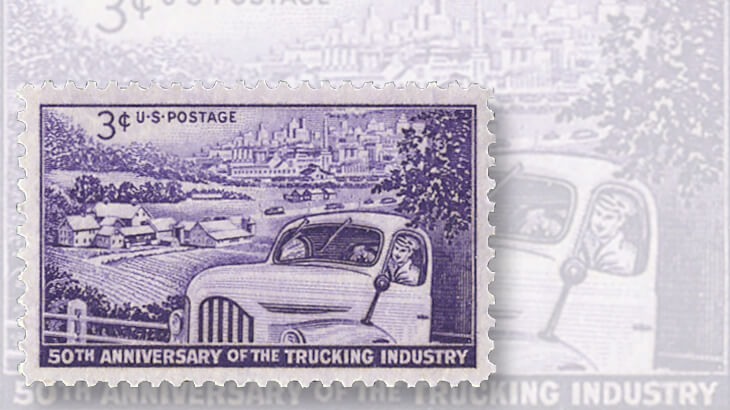 The cartoon caption contest stamp for August is the 1953 3¢ stamp honoring the 50th anniversary of the American trucking industry. The appearance of the driver on the stamp was considerably altered in this final design from the man in the original photo. Put yourself behind the wheel, and tell me what you might be saying or thinking. There will be a prize for the best philatelic and nonphilatelic lines. The rules to enter the contest are in the accompanying article. Entries must be received by Aug. 26 for a chance to win a prize.
Previous
Next

How stamp designs evolve is a fascinating story. In the case of the 1953 Trucking Industry stamp (Scott 1025), the design source for the truck was the photograph shown nearby.

An early rendering of the design for the stamp is pictured on the first-day postcard. In this design, the truck had changed, but the physical form of the driver was basically the same, although his face had been simplified.

The final version of the design got rid of the driver’s wave and confined him to the cab of the truck. My guess would be that someone wanted to put the spotlight more on the truck and less on the driver.

Whatever the reason, this is one of a long line of U.S. stamps that were based on living models. The original photo shows Ben Winterberger behind the wheel, though by the time the final design was approved, his image had been modified into that of an anonymous truck driver.

With this background, let’s use this 3¢ stamp for the August cartoon caption contest.

Place yourself behind the wheel of the truck and tell me what you think the driver might be saying or thinking about the stamp subject, truck driving, stamp collecting, sports, politics, or whatever else gets your creative juices flowing.

To be considered for the prizes, entries must reach me no later than Aug. 26.