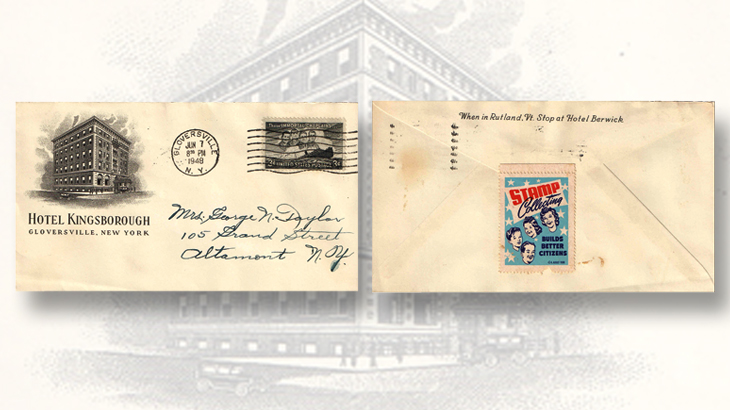 Author Steve Swain was initially drawn to the detailed engraving of the Hotel Kingsborough on this 1948 cover sent from Gloversville, N.Y. When he looked at the back (right), he found a nice surprise affixed to the envelope flap: an A. August Tiger poster stamp promoting the benefits of stamp collecting. 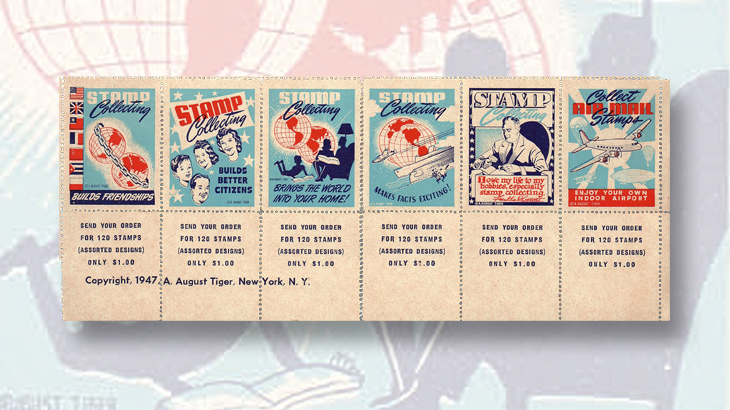 In the late 1940s, A. August Tiger of New York produced a set of six cinderellas championing stamp collecting. One of the cinderella stamps (second from the right) pictures Franklin D. Roosevelt and a quote from him about his passion for the hobby.
Previous
Next

Franklin D. Roosevelt once said about stamp collecting that it “dispels boredom, enlarges our vision, broadens our knowledge, makes for better citizens and in numerable ways enriches our lives.”

Recently, Roosevelt’s “better citizens” message was prominently echoed on a piece I acquired for my advertising cover collection, and I got more than what I had bargained for.

When first viewing the cover highlighting the Hotel Kingsborough in Gloversville, N.Y., its primary attraction was a sharply engraved rendering of the hotel and the gray-black 3¢ Immortal Chaplains stamp (Scott 956) tied to the cover with a solidly struck duplex cancel.

Opening just after the turn of the 20th century, the Kingsborough quickly gained a reputation for being the leading hotel at the foothills of the Adirondacks, “renowned for its food and spacious dining room.” Without a doubt, this was a very attractive and desirable advertising cover.

When I turned the envelope over to look for backstamps or other significant markings, Roosevelt’s message rang loud and clear through an additional feature — a cinderella, or stamplike label — affixed to the cover.

The mailing most likely had been sent by a collector who affixed a “Stamp Collecting Builds Better Citizens” poster stamp to the lower part of the envelope’s back flap. (For more information about collecting poster stamps — sometimes called cinderellas — visit the website of the Poster Stamp Collectors Club at www.posterstampcc.org.)

The stamp, one in a set of six promoting the benefits of stamp collecting, was created in the late 1940s by A. August Tiger of New York.

A strip of the six stamps is pictured nearby. Note that the bottom selvage states that an order of 120 stamps cost just $1.

As the stamps declare, not only does stamp collecting build better citizens, but the hobby also “builds friendships,” “brings the world into your home,” and “makes facts exciting.” Another stamp advises you to “collect air mail stamps” because you can “enjoy your own indoor airport.”

Interestingly, one of the stamps in the set depicts Roosevelt sitting at his desk with his collection. But instead of the “builds better citizens” message, the choice for this stamp’s announcement of the benefits of collecting is Roosevelt saying how he owes his life to his hobbies, “especially stamp collecting.”

I am an avid stamp collector and the first to readily admit that it is not the flashiest of hobbies.

Sometimes I find it difficult to adequately explain my passion for these little pieces of paper and postal history.

Nonetheless, I have never apologized for the time I devote to the hobby, for I am truly confident of the many benefits it provides.

And if I am a better citizen for it, all the better!