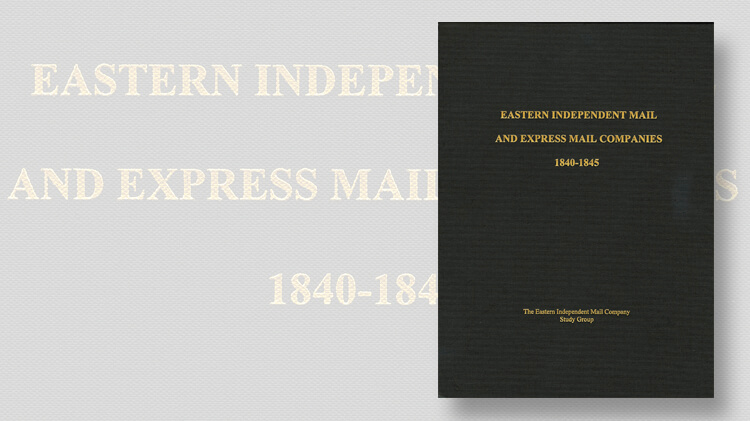 Who is permitted to carry mail in the United States? In his introduction to a new book on Eastern independent mail companies, Scott R. Trepel says that this question “has been asked, answered and studied by countless individuals, from nineteenth century businessmen who hoped to profit from establishing private mail companies to today’s living scholars who try to explain the principals and motiviations for and against the federal monopoly.”

The book’s objective is to provide the history of each of the Eastern independent mail and express mail companies and to document the stamps, letters and markings associated with these companies.

Each chapter is devoted to a single company. The company’s stamps, handstamps, precancels and cancellations are described in detail and illustrated in color. Tables include dates for earliest known use and latest known use, and census data on the examples known to have survived.

The authors provide a glimpse into the challenges the enterprises faced.

The book is a treasure trove of information, and equally is an interesting read.

Trepel presents a compelling introduction into the history of the Eastern independent mail companies.

Restrictions on private conveyance of mail existed as far back as 1823 when Congress passed the first river and habor act making waterway improvements and designating navigable waters as post roads.

The United States Post Office Department interpreted this act as a declaration of a monopoly that granted the federal government an exclusive right to convey mail and protected the Post Office against competition.

The first independent mail route opened in 1843, following on the heels of postal reform in Great Britain (1840) and the issuance of the first adhesive postage stamp.

Eastern independent mail companies flourished from 1843 to 1845 but were met with numerous challenges, including threats from the Post Office.

Eastern Independent Mail and Express Mail Companies 1840-1845 is a worthy additon to the library of any collector of U.S. stamps. The 680-page reference work has a limited print run. Priced at $75 postpaid within the United States, it can be ordered from Michael Gutman, Box 1108, Mashpee, MA 02649.