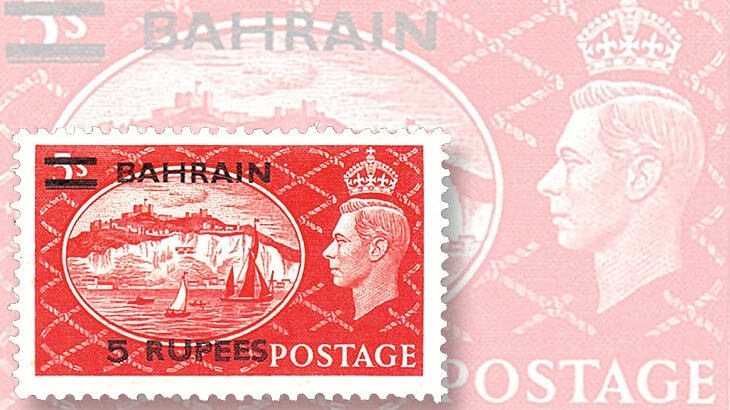 Minor errors and varieties of British Commonwealth and Empire stamps, such as this Bahrain 1950 5-rupee-on-5-shilling King George VI and HMS Victory variety with the extra bar in the overprint (Stanley Gibbons 78a/Scott 79 variety), are in demand and brin

British Commonwealth plate and printing varieties are very popular with collectors and often command large premiums over the normal stamps.

Plate varieties of the Silver Jubilee omnibus issue of 1935 and damaged overprint and incorrectly typeset varieties of the 1942 Bahamas Columbus set (Scott 116-129) are valuable and in great demand.

So is the Bahrain 1950 5-rupee-on-5-shilling King George VI and HMS Victory variety with the extra bar in the overprint (Stanley Gibbons 78a/Scott 79 variety).

A mint never-hinged example recently sold in an online auction for the equivalent of about $260. The normal stamp is valued in mint never-hinged condition in the 2016 Scott Classic Specialized Catalogue of Stamps and Covers 1840-1940 at just $27.

While mostly beyond the scope of Scott catalogs and other worldwide catalogs, such minor errors and varieties are well-documented in the Stanley Gibbons specialized catalog, which lists literally thousands of them.

To aid in collecting or searching for these items, we recommend obtaining a copy of the Stanley Gibbons Commonwealth & British Empire Stamps 1840-1970. The 2016 edition sells for about $110 retail, but you can probably find a fairly recent used copy for a fraction of that.

It would be hard to overemphasize how active the market for these varieties is and how eagerly they are sought by collectors on both sides of the Atlantic.

Most nonspecialist dealers in the United States don’t make the effort to scrutinize their stocks for these varieties. Armed with a bit of knowledge, you could make some very lucky discoveries.