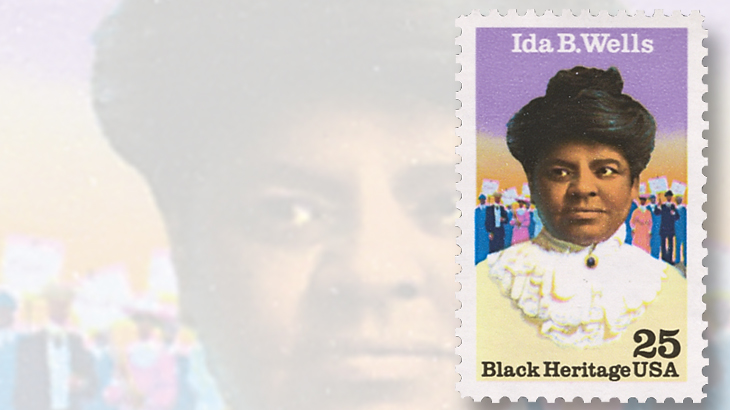 Ida B. Wells was commemorated on a 25¢ Black Heritage series stamp in 1990.

Ida Bell Wells was an early civil rights leader who crusaded against lynching as a pioneering black journalist. Born into slavery in Holly Springs, Miss., on July 16, 1862, she studied at Rust University and Fisk University while working as a teacher.

She began to write newspaper articles documenting injustices committed against blacks, and in 1889 she became part owner of Free Speech, a newspaper in Memphis, Tenn.

Following the murder of three friends in 1899, Wells began an investigative series on lynching. When the articles were published, her newspaper’s offices were destroyed by a mob and her life was threatened. She traveled in Europe, speaking out about the violence of lynching in the United States.

Wells participated in the Niagara Movement seeking equal rights for black Americans, and was a founder of the National Association for the Advancement of Colored People (NAACP), the National Association of Colored Women’s Clubs, the National Afro-American Council, and the Negro Fellowship League. Working on behalf of voting rights for women, she also founded the Alpha Suffrage Club of Chicago in 1913, and lived to see the 19th Amendment ratified in 1920. She died of kidney failure on March 25, 1931.