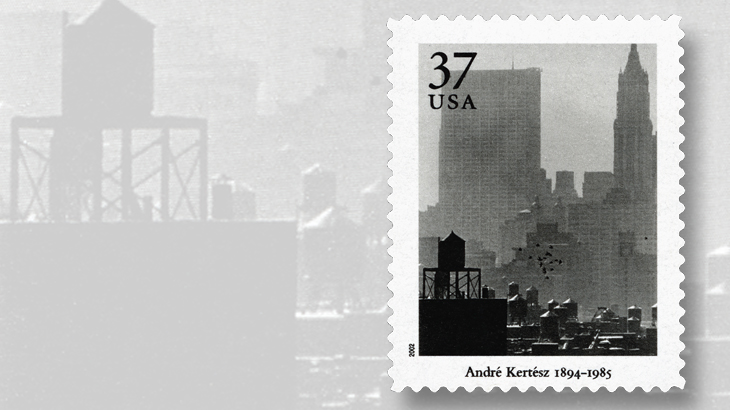 A New York cityscape by photographer Andre Kertesz is featured on this 37¢ stamp from 2002.

Andre Kertesz was born July 2, 1894, in Budapest, then part of the Austro-Hungarian Empire. The award-winning photographer was honored on a 37¢ United States stamp (Scott 3649r) issued June 13, 2002, in the Masters of American Photography set. The black-and-white picture on the stamp shows an urban scene of New York.

This brief profile is printed on the liner paper behind the self-adhesive stamp: “By combining simple, personal observation with compassionate interest in the human condition, Hungarian-born Andre Kertesz (1894-1985) made carefully balanced yet spontaneous photographs infused with the appealing brightness and wit he found in the urban experience. The dramatic play between pattern and deep space in the New York cityscape reveals Kertesz’s mastery of complex composition.”

Kertesz moved to Paris in 1925, but left Europe for the United States in 1936. His photographs appeared in Harper’s Bazaar, Look, Vogue and other magazines, but when World War II began, Kertesz was registered as an enemy alien because Hungary was among the Axis powers, and that limited his opportunities as a photographer for several years.

He became an American citizen in 1944, and after the war his photographs were chosen for an exhibit at the Art Institute of Chicago.

Recognition for Kertesz came slowly, but today he is considered one of the leading innovative photojournalists of the 20th century.