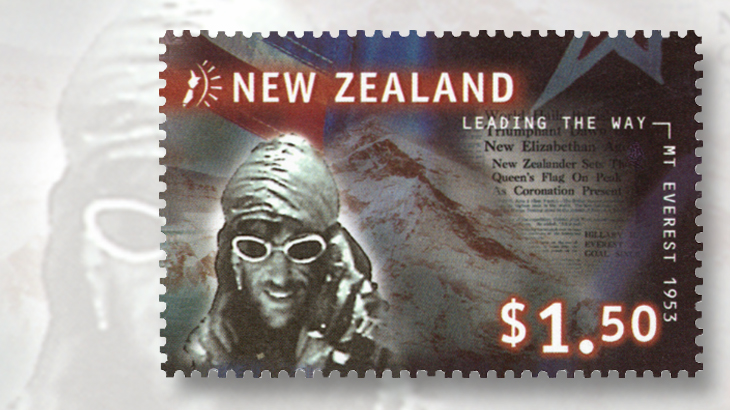 Sir Edmund Hillary, who conquered Mount Everest in 1953, on a $1.50 stamp issued by his native New Zealand.

Sir Edmund Percival Hillary was born July 20, 1919, in Auckland, New Zealand. On May 29, 1953, Hillary and Sherpa mountaineer Tenzing Norgay became the first two people to climb to the top of Mount Everest, the world’s tallest mountain.

Hillary’s interest in mountain climbing began while he was still in school, and after serving in the New Zealand Royal Air Force during World War II, he continued to embark on climbing expeditions.

As part of the large expedition headed by John Hunt, Hillary and Norgay attempted the Everest summit after an earlier pair of climbers from the group failed to reach it. At the top, the two men shook hands, and Hillary photographed Norgay and views from their vantage point.

Hillary never climbed Everest’s peak again, but he did climb other peaks in the Himalayas and reached both the South Pole and the North Pole.

After achieving worldwide fame for conquering Everest, Hillary spent much of his later life engaged in philanthropic works. His Himalayan Trust, established in 1960, continues today in its efforts to assist people in need in Nepal.

Hillary died in 2008 at age 88. He has been honored on stamps from many countries, including several from his native New Zealand. A 1999 Millennium set titled New Zealanders Leading the Way features Hillary on a $1.50 stamp (Scott 1626).