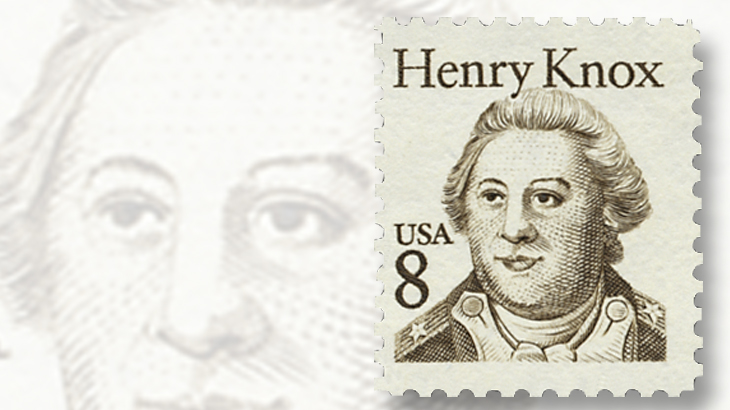 In his 1900 biography of Revolutionary War military leader Henry Knox, author Noah Brooks described him as “a master of strategy” and “one of the foremost of that glorious company of military heroes whose genius and prowess guided the American people from a condition of colonial dependence to one of national sovereignty.”

Knox was born in Boston on July 25, 1750, the son of a ship builder who traveled to the West Indies and died there when Knox was just a child.

As a young man he was the owner of a book shop who supported revolutionary causes. He joined the militia when the war began and his actions came to the attention of Gen. George Washington and John Adams, who sought to place him in charge of the Continental Army’s artillery.

Knox served alongside Washington during the war and was responsible for directing and improving the Army’s artillery forces. Following Washington’s retirement, Knox became the Army’s senior officer. He was appointed Secretary at War in 1785, serving in that post for 10 years. He died in 1806 at age 56, and has been honored with the naming of Fort Knox, Ky., and numerous towns, cities and counties across the country.

The 8¢ Henry Knox definitive stamp in the Great Americans series was issued on July 25, 1985, the 235th anniversary of his birth.