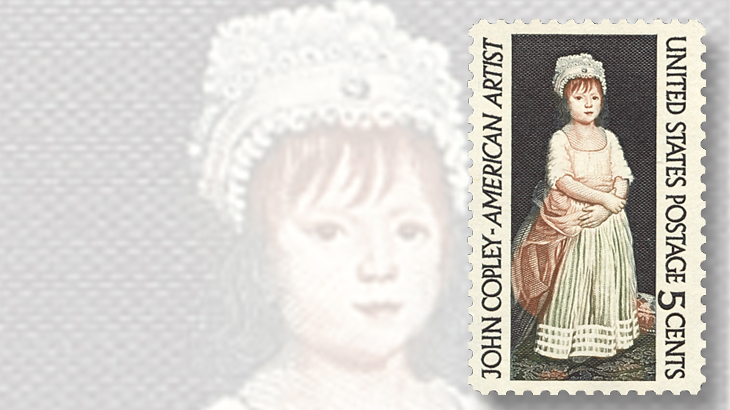 The 1965 5¢ stamp honoring John Singleton Copley shows a detail from one of his oil paintings.

Though his birthdate is uncertain, many references suggest that portrait artist John Singleton Copley was born July 3, 1738, in Boston, Mass. His parents were Irish-born merchants who came to the United States just two years before the birth of their son.

The 5¢ stamp honoring Copley (Scott 1273) was issued Sept. 17, 1965, and shows a detail of his painting The Copley Family, an oil-on-canvas painting completed about 1777. The stamp design depicts Copley’s six-year-old daughter Betsy; the full painting also includes the artist and his wife, her father Richard Clarke, and the Copley’s three other children.

The painting is in the collection of the National Gallery of Art. The stamp is part of the 1961-75 American Artist commemorative series.

When Copley was still a youngster his own father died, and his mother remarried in 1748. Copley’s stepfather, Peter Pelham, was a limner and engraver who contributed to Copley’s introduction to the arts. Though Pelham died just three years later, Copley was soon creating portraits, well on his way to becoming an admired Boston artist.

Copley’s paintings were exhibited in Europe and were in demand in Boston and New York. He left for England in 1774 and was joined by his family the following year. There he continued to create and exhibit portraits while also completing historical paintings. Copley died in London on Sept. 9, 1815.