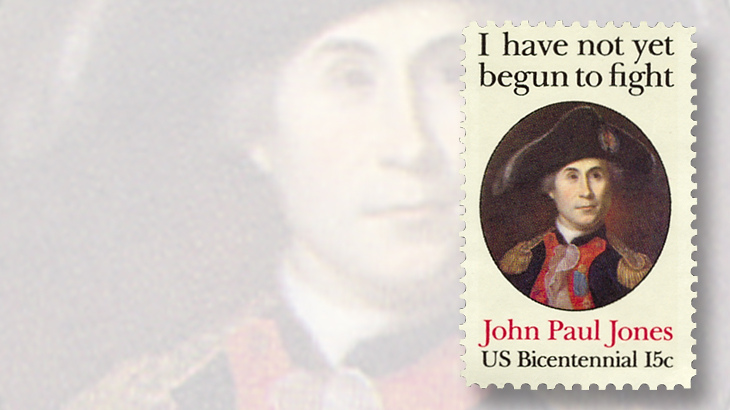 The 15¢ stamp honoring John Paul Jones includes his famous quote, "I have not yet begun to fight."

The United States Navy describes John Paul Jones as one of its founders.

He was born simply John Paul in Kirkcudbrightshire in southwestern Scotland on July 6, 1747. At age 13 he was apprenticed to a merchant and served on board the brig Friendship. He successfully assumed command of another ship at age 21 when its captain and first mate both died of yellow fever.

Defending himself during a mutiny in Tobago in 1773, he killed one of the ringleaders and then made his way to America, taking on the name John Paul Jones. Two years later he volunteered to serve in the Continental Navy in the war for independence.

Commanding the Ranger in 1778, Jones executed a raid on Whitehaven in England, shocking the British with his bravado. The next year, Jones commanded more ships and advanced upon merchant vessels and British warships returning to England from the West Indies.

During a fierce North Sea battle between his 42-gun USS Bonhomme Richard and the British HMS Serapis, the British commander called for Jones to surrender; he replied defiantly, “I have not yet begun to fight!” and defeated the British forces.

Jones would later serve in the Russian Navy before retiring to France in 1790. He died two years later at age 45.