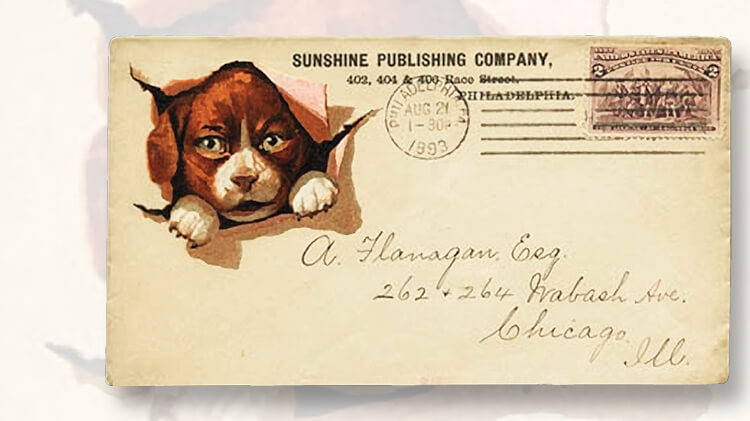 The June 23 auction of advertising covers conducted by Daniel F. Kelleher included this irresistible 1893 example augmented by the portrait of a cute puppy. It sold for $212. 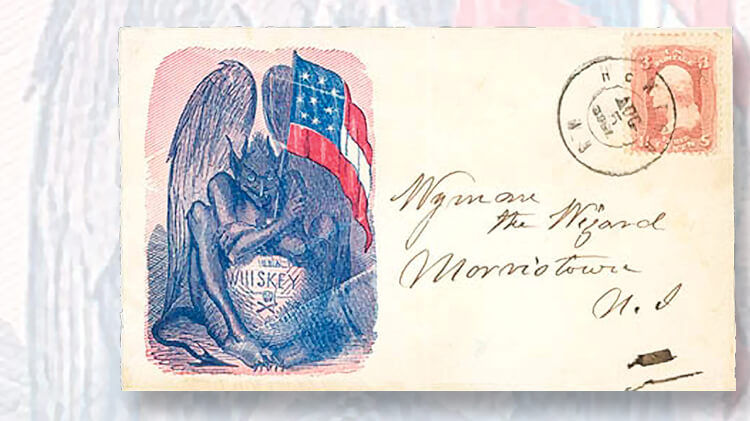 Sent from one New Jersey town to another, this cover illustrating the devil, a Confederate flag, and a whiskey barrel sold for many times its original estimate at the Daniel F. Kelleher auction.
Previous
Next

The firm of Daniel F. Kelleher Auctions offered a pair of interesting sales at its offices in Danbury, Conn. on June 23: illustrated advertising covers and Civil War patriotic cachets from New Jersey.

The former collection offered many quaint and occasionally amusing designs, providing not only a showcase of American commerce and industry in the late 19th and early 20th centuries, but also a survey of graphic design and multicolor printing development in that era.

Anyone who thought that cute animals were an innovation of the Internet age would have been set straight by a cover with a design advertising the Sunshine Publishing Co. of Philadelphia. Printed in rich, lithographic multicolor, it appears to show a puppy bursting through the envelope paper.

Addressed to Chicago, the letter is franked with a 2¢ Columbian stamp (Scott 231) tied by an Aug. 21, 1893, straight-line machine cancel, a recent innovation at that time. It sold for $212, including the firm’s 18 percent buyer’s premium added to all lots.

A rather creepy caricature of the devil, crouched over a whiskey barrel and holding a nine-star Confederate flag, was printed in red and blue on an envelope sent from Newton, N.J., to Morristown, N.J., in 1862.

Described as “the only example we have seen of this design” and unlisted in either the Bischel or Walcott reference works for the genre, it was estimated at $2,000 to $3,000 but ended up realizing $14,750.

Sometimes, the devil you don’t know turns out to be pretty good!