First-day cover devotees to gather at Americover show: When and where it’s happening 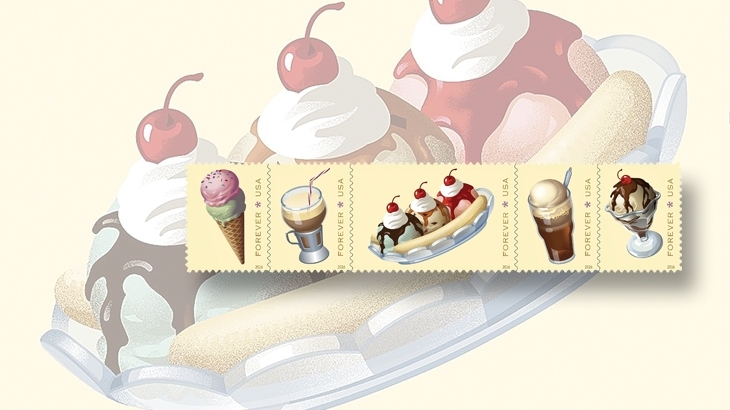 Although no first-day ceremony is planned for the American First Day Cover Society's Americover show Aug. 19-21 in Falls Church, Va., there will be a dedication ceremony for the Soda Fountain Favorites stamps issued June 30.

The Washington, D.C., area is a hotbed of stamp collecting, with one of the most active chapters of the American First Day Cover Society, so it is not a surprise that the AFDCS often holds its annual Americover show there.

The pre-show tour on Thursday, Aug. 18, will include a special Maynard Sundman Lecture at the Smithsonian’s National Postal Museum.

The lecture is titled “Parks, Postmarks, and Postmasters: Post Offices within the National Park System,” and will be presented by former National Park Service interpretive planner Paul Lee. Chief Philatelic Curator Daniel Piazza also will lead a tour of the museum’s exhibits for attendees.

Americover 2016 is a World Series of Philately show, and its 160 exhibit frames were sold out more than two months before the show. All of the exhibits are related to FDCs. The dealer bourse is nearly sold out, too.

The AFDCS will hold its annual meetings at Americover 2016, as will the Universal Ship Cancellation Society and the American Society of Polar Philatelists.

Because of World Stamp Show-NY 2016 earlier this summer, most of the World Series of Philately shows in the East are skipping their 2016 editions.

However, the AFDCS figures that two and a half months after World Stamp Show, FDC collectors and others will be ready for another show.

Americover tends to be a little untraditional — for example, the exhibit awards are handed out at a Saturday-morning meeting — but one tradition will be upheld this year: The show hotel rate is again under $100 per night. The discount code to obtain this rate at the Falls Church Marriott Fairview Park is ACVACVA.

Speaking of the show hotel, this is the third time Americover has been held at this site.

Additional information about the show can be found online.

Unfortunately, as of the Linn’s deadline for this column, no first-day ceremony has been scheduled for Americover 2016, the annual gathering of people who produce and collect first-day covers.

Bring your own spoon.

Greater acceptance for FDC exhibits on the horizon

FDC exhibits are on increase in numbers and in acceptance