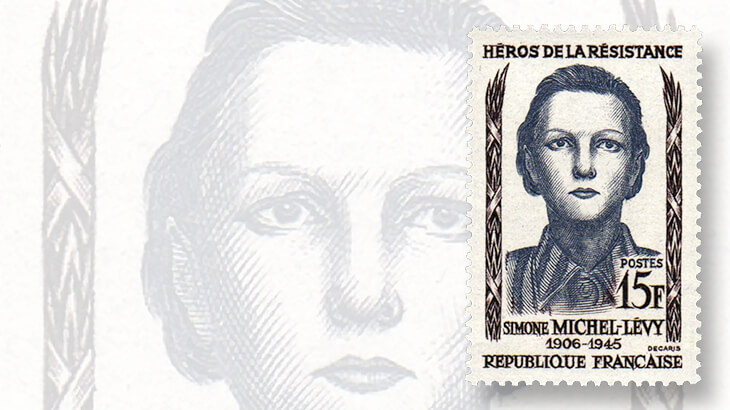 Simone Michel-Levy, one of three women included in the stamp series, facilitated communications within the resistance. 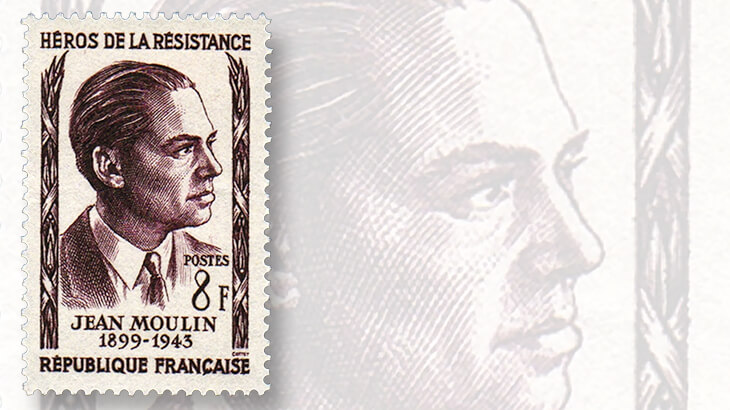 The first person honored as a Hero of the French Resistance was Jean Moulin, perhaps the greatest and best known of all. 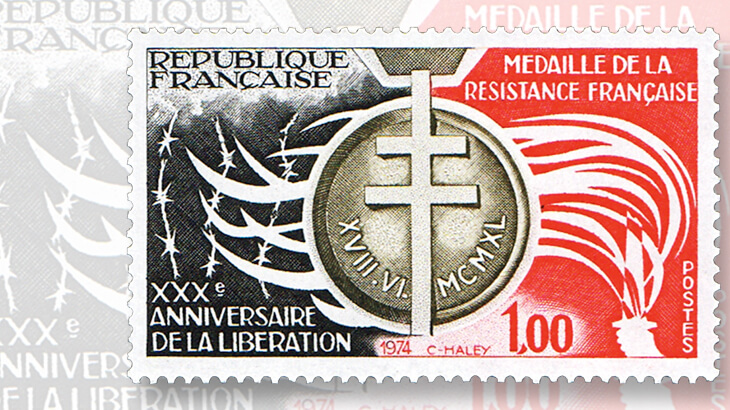 The French Resistance Medal is shown on this 1974 stamp marking the 30th anniversary of liberation. 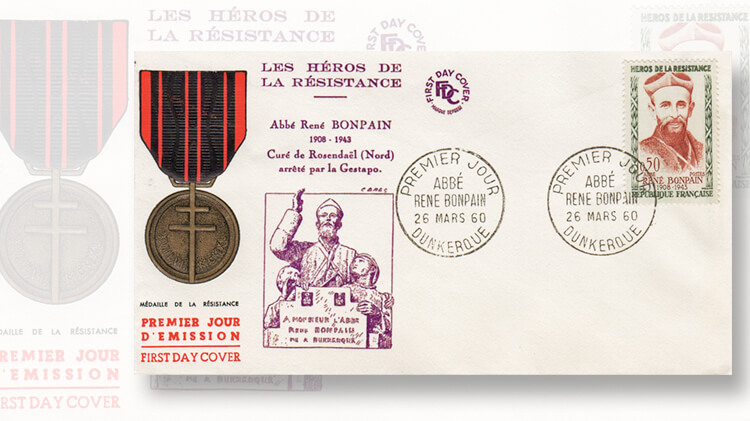 This first-day cover shows Rene Bonpain, a Franciscan monk who smuggled people and mail from occupied northern France to the unoccupied southwestern part of the country. 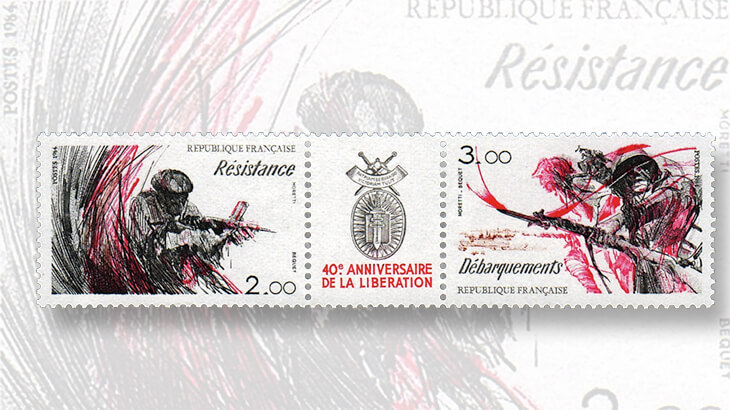 This pair of 1984 stamps for the 40th anniversary of liberation shows a resistance fighter (left) and the Normandy landing (right), separated by a label picturing a medal with the Cross of Lorraine. 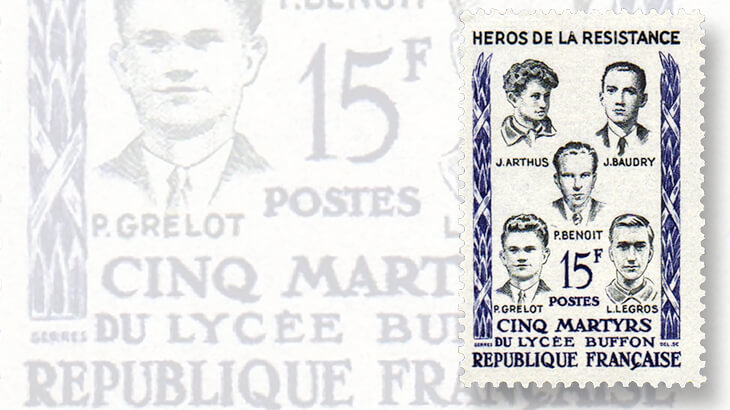 Five young men from the Buffon school in Paris fought the Germans valiantly before they were captured and killed. 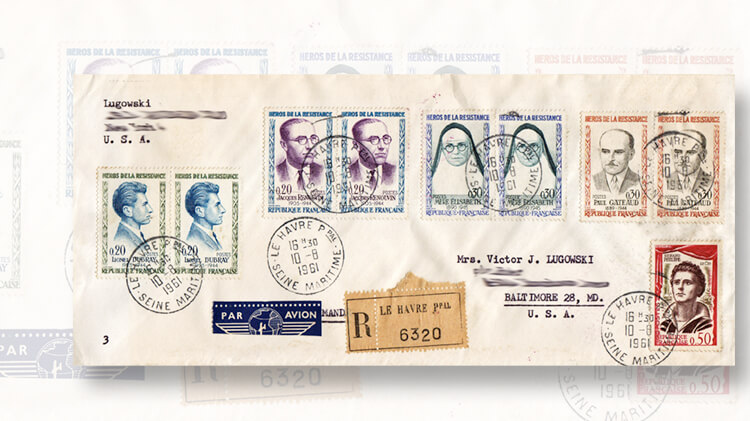 This registered airmail letter to the United States has pairs of all four stamps of the 1961 set. The heroes include Lionel Dubray, a section leader; Jacques Renouvin, an organizer; Paul Gateaud, a communicator; and Mother Marie Elisabeth, a nun who used 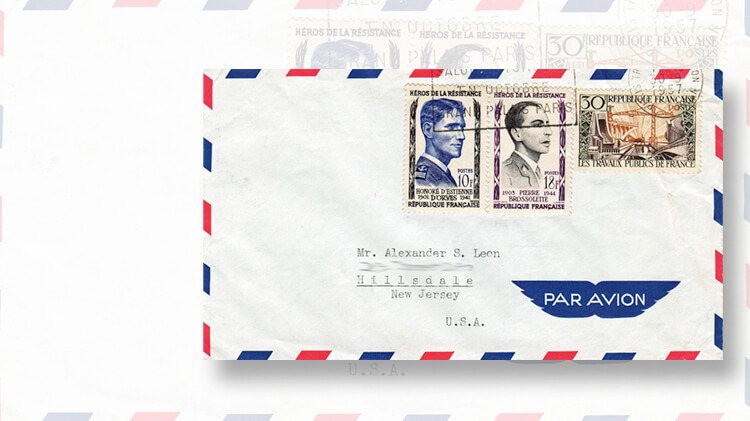 Two stamps from the 1957 set were used on this airmail cover to the United States. Honore d’Estienne only fought for a few months before being captured and killed, and Pierre Brossolette was a resistance leader who committed suicide to avoid giving inform 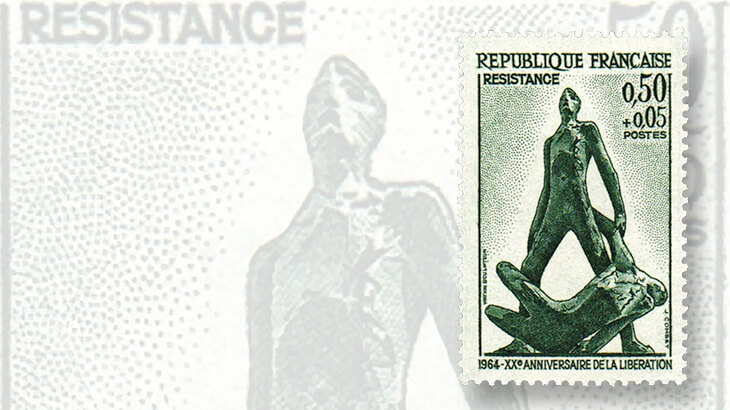 This 1964 semipostal stamp picturing the Resistance Memorial statue located in Paris commemorates the 20th anniversary of liberation.
Previous
Next

After Germany invaded France in 1940, an armistice was signed June 22 in which the French agreed to an immediate cessation of fighting. Many French citizens decided that collaboration with the Germans was in their best interest, but others vowed to fight, although this was in violation of the terms of the armistice.

The Free French movement was set up with the support of the British. It was based in London and headed by Charles de Gaulle, a tank corps officer in the French army.

From 1957 through 1961, France issued four sets of stamps honoring 27 heroes of the resistance, all but one of whom were killed during the war.

The first set of stamps (Scott 826-830), issued May 18, 1957, honored five heroes. The lowest value, 8 francs, pictures Jean Moulin, sometimes said to be the greatest hero of the resistance. Moulin convinced de Gaulle to unite the many independent resistance groups into a single organization in order to be more effective against the Nazis.

Moulin set up the National Resistance Council, which consisted of 16 resistance organizations. They met in the spring of 1943 and ultimately agreed to unite with de Gaulle as their leader.

Moulin was captured by the Germans shortly thereafter and died while in German custody. He is well-remembered today, and there is a museum in Paris dedicated to him.

Two other heroes, Honore d’Estienne and Pierre Brossolette, are shown here on stamps franking a cover mailed to the United States. The three stamps total 58 francs, which includes the Universal Postal Union rate to the United States of 35fr and the airmail supplement of 23fr for letters weighing 5 grams or less.

D’Estienne (on the 10fr stamp, Scott 827)joined the resistance in October 1940 and was in action for several months. He was arrested by the Germans in January 1941 and executed by them the following August.

Brossolette (on the 18fr stamp, Scott 829)was a French journalist, left-wing politician and leader of the resistance. He became one of de Gaulle’s primary advisors and helped found the National Resistance Council. The Germans captured him in 1944. After being tortured, he committed suicide to avoid revealing information.

The set issued on April 19, 1958 (Scott 879-882), honored four heroes, including one of the three women of the 27, Simone Michel-Levy, on the 15fr stamp (Scott 881). A telecommunications worker before the war, she set up a clandestine radio network and a courier system to get messages to England.

She was arrested in November 1943 and hanged by the Germans on April 13, 1945, only 10 days before the Allies liberated the camp where she was held.

The Buffon School was established in the 1880s and is the equivalent of a junior and senior high school. It still exists today.

The five young men honored on the 15fr stamp (Scott 915) were active members of the resistance starting in the fall of 1940. Their actions ultimately included attacks and sabotage against the Nazis. They were arrested in the summer of 1942 and executed by firing squad on Feb. 8, 1943.

Bonpain was ordained as a Catholic priest in 1932 and became a Franciscan monk. After the war broke out, he organized the passage of people and mail in false-bottom coal convoys from the northern France area of Dunkirk to unoccupied cities in southwest France. He was captured by the Germans in November 1942 and was executed March 30, 1943.

Pairs of all of the final set of heroes, issued April 22, 1960 (Scott 990-993), are shown on a registered cover to the United States. The total franking is 2.50 francs, which includes the UPU rate to the United States of 50c, the airmail supplement of 1.40fr, and the registration fee of 60c. Based on the airmail supplement, the letter weighed between 15 grams and 20 grams.

Lionel Dubray (20c, Scott 991) participated in the resistance for a year and a half, most notably as the head of a section of guerrilla fighters, until he was captured and executed in 1944.

Jacques Renouvin (20c, Scott 990) was first responsible for propaganda and then was in charge of organizing groups of resistance members. He was arrested by the Germans in early 1943 and died a year later after being tortured and sent to a German concentration camp.

Mother Marie Elisabeth (30c, Scott 993), whose given name was Elise Rivet, was a Roman Catholic nun. She hid refugees and stored weapons and ammunition for the resistance in her convent. She was arrested in 1944 and wound up in a German concentration camp. She sacrificed herself to the gas chamber in place of a mother on March 30, 1945, only weeks before the German surrender.

Paul Gateaud (30c, Scott 992) was a postal inspector in 1940 and distributed propaganda leaflets. Later, to facilitate sabotage, he transmitted information on the German storage of arms and ammunition. He was arrested in May 1944 and executed less than a month later.

All the stamps in the series were engraved and printed by intaglio. The 1960 and 1961 sets are denominated in the revised currency, in which one new franc equaled 100 old francs.

France has continued to honor the resistance with additional stamps. A few of them are shown here.

In 1964, on the 20th anniversary of liberation from German occupation, a 50c+50c semipostal stamp (Scott B381) shows the Resistance Memorial by French sculptor Gaston Watkin. It is located in Luxembourg Gardens in Paris.

In 1974, the French Resistance Medal was featured on a 1fr stamp (Scott 1411). On the left of the medal is a representation of a prison and on the right is a burning torch, suggesting liberation. The date on the medal in Roman numerals is 18.6.1940, the European style for June 18, 1940. On that date, Charles de Gaulle issued his famous appeal for anyone who could to come to Britain and join the Free French Army.

In 1984, a joined pair of stamps (2 fr, Scott 1929; 3fr, 1930) shows a resistance fighter on the left and the Allied landing in Normandy on the right. Between them is a label picturing a medal with the Cross of Lorraine, the symbol of the Free French Forces.