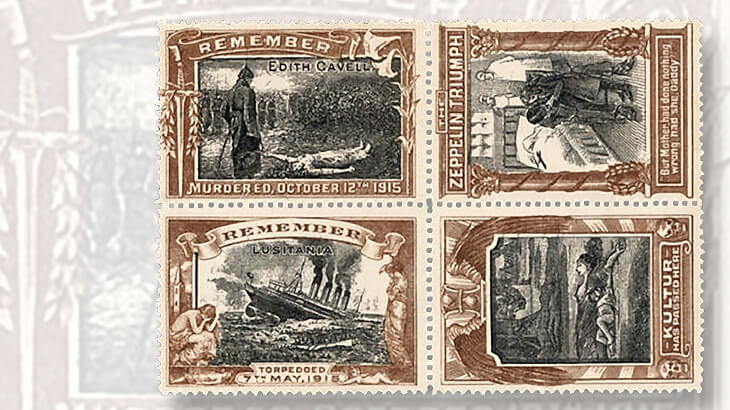 The 1917 se-tenant block of four German War Crimes propaganda labels designed by Louis Raemaekers is a good buy in the $10-to-$15 price range.

Loosely defined, a cinderella stamp is anything that looks like a postage stamp that was never valid for payment of postage. Cinderella categories include revenue stamps, charity stamps, propaganda labels, poster stamps, test stamps, and advertising stamps. Local post stamps that might in fact pay for some type of mail delivery service are also generally considered to be cinderella stamps. Collecting strategies are as varied as the types of cinderellas.

One hundred years ago, the world was engulfed in war. Although the United States would not enter the war until April 6, 1917, the major European countries and their imperial and colonial holdings had been busily killing each other since August 1914. Propaganda was integral to the war effort, and it was the heyday of the propaganda label. Many fascinating and attractive sets were produced.

One of the most striking sets was issued about 1917 in Great Britain, based on designs by Dutch artist Louis Raemaekers. The set features four se-tenant designs depicting alleged German war crimes: the sinking of the RMS Lusitania, the execution of nurse Edith Cavell, the killing of French and Belgian civilians, and civilian casualties produced in Zeppelin bombing raids against Great Britain.

The subjects appeal to a variety of topical collectors. The stamps were produced with frames in various colors around black vignettes. Colors known include gray-blue, red-lilac, and brown. Examples are often handstamped on the back, “Published by Winox LTD, Richmond, Surrey, England. WWC.”

Prices vary widely, but an undamaged se-tenant block of four is generally a good buy at $10 to $15.