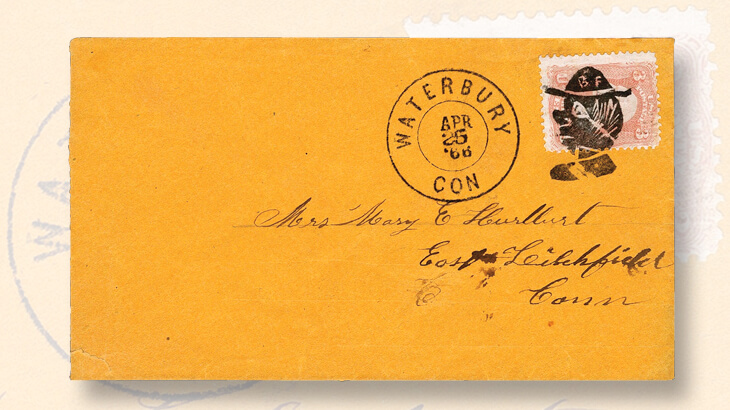 H.R. Harmer of Tustin, Calif., auctioned a cover showing the Bridgeport Fireman postmark, one of the finest examples known. The cover sold for $102,000 at the June 3 sale. 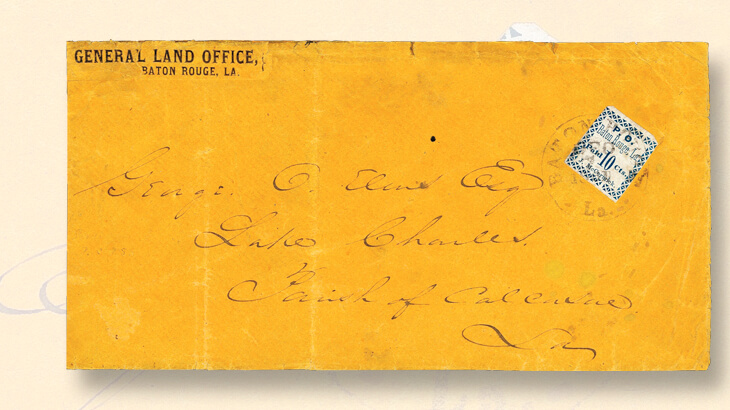 H.R. Harmer, based in Tustin, Calif., offered U.S. and worldwide rarities in a morning session and the collection of retired German retail magnate Erivan Haub in the afternoon. The sales were previewed in Linn’s on May 30.

A rare March 1862 cover bearing a Confederate postmaster’s provisional stamp of Marion, Va., (Scott 55X2) was said to be one of just six examples in private hands and one of the finest overall. It sold for $60,000, including H.R. Harmer’s 20 percent buyer’s premium.

In the 19th century, the custom for postmarking a letter was to apply a dated town cancel to a blank area of an envelope, and use some other canceling device to obliterate the postage stamp. It was left up to individual postmasters to make their own cancelers, and some got creative by carving fancy designs into pieces of cork.

One of the most famous practitioners of the cancel-carver’s art was John W. Hill, who started out in 1865 as a clerk in the Waterbury, Conn., post office and eventually moved up to postmaster before retiring in 1890. His highly collectible cancels include images of animals, insects, people, geometric designs and more; his most famous may be the Running Chicken — or is it a turkey?

Because cork is not a durable substance, most designs wore out quickly and were in use for only a short time.

A cover bearing a crisp strike of one of Hill’s best-loved designs, known as the Bridgeport Fireman, was the high seller in the Haub sale. Said to be the earliest and finest example of this fancy cancel, the cover opened at $15,000 and climbed steadily before being hammered down at $85,000 — or $102,000 with premium. The room burst into applause.

The sale included a run of impressive Pony Express covers, such as one sent from San Francisco to St Joseph, Mo., on June 22, 1861, arriving on July 4.

The only known cover bearing a Baton Rouge, La., 10¢ postmaster’s provisional (Scott 11X4), an orange legal-size envelope sent from the General Land Office to a lawyer in Lake Charles, was another highlight of the sale: It brought $60,000.