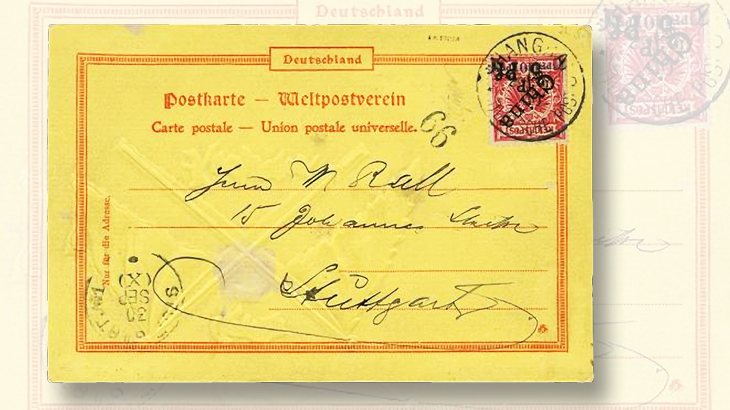 Harmer’s offered a 1900 postcard mailed from Kiautschou (now Jiaozhou, China) to Stuttgart franked with a rare error of the 5-pfennig-on-10pf provisional overprint. It brought $57,000. 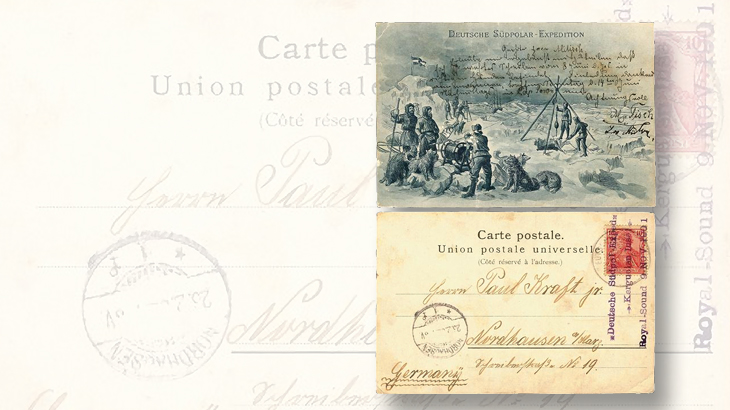 H.R. Harmer’s sale on June 3 at WSS-NY 2016 included a 1901 postcard that is the first piece of mail from the Gauss Expedition, the first German expedition to Antarctica. It sold for $20,400.
Previous
Next

H.R. Harmer’s sale, on June 3, included a piece of postal history from this voyage. With a cancel reading “Deutsche Südpol Exped./Kerguelen Insel/Royal-Sound 9 NOV 1901,” this historically important postcard was the first piece of mail from the first German expedition to Antarctica.

Continuing with the German area, Harmer’s offered a 1900 postcard from Kiautschou (modern-day Jiaozhou, China) mailed to Stuttgart bearing a rare error of the 5-pfennig-on-10pf provisional overprint.

Basic 10pf German Eagle definitives had been overprinted “China” with a surcharge of 5pf. A few stamps show a typo — “fP” for “Pf” — and a few of those errors received a second, larger “5 Pf” surcharge (Scott 9c). Only a handful of the latter are known, including two on cover.

The postcard in the Harmer sale, with a patriotic crossed-flags design on the reverse, fetched an impressive $57,000.