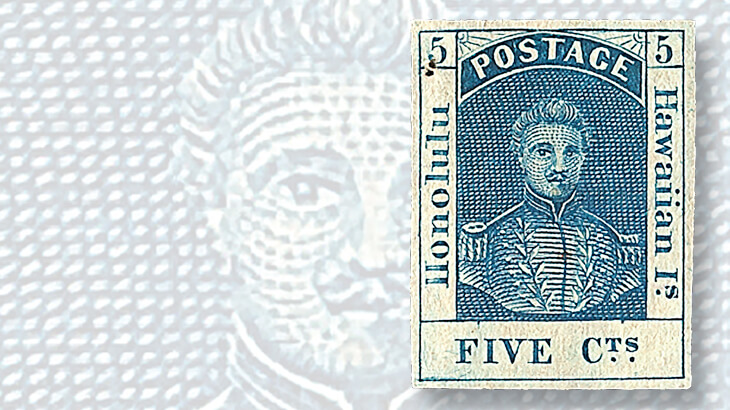 The reissued 1868 Hawaii 5¢ blue King Kamehameha III stamp (Scott 10) is undervalued in the 2016 Scott Specialized Catalogue of United States Stamps and Covers, but is still within reach of most collectors.

King Kamehameha III (1813-1854) was the longest-ruling monarch of Hawaii. He reigned in the island kingdom for 29 years and 192 days. He took Hawaii from an absolute monarchy to a constitutional government, instituting its first constitution in 1840, and a second in 1852.

The stamp was sold at face value at post offices but was not valid for postage. The 2016 Scott Specialized Catalogue of United States Stamps and Covers values the unused stamp in original gum condition at just $27.50.

The reissued stamp can be differentiated from the earlier stamps by paper types. In 1889, official reprints of the 5¢ stamp (Scott 10R), which were not postally valid, were produced and sold. The Scott U.S. Specialized catalog shows enlarged images of the designs and a written description to help in differentiating the 1868 stamp from the 1889 reprint.

The 1868 reissued stamp (Scott 10) is seriously undervalued in the Scott U.S. Specialized catalog. Probably fewer than 1,000 examples with original gum still exist. They sell for considerably more than Scott catalog value when offered. It is a good buy at up to double catalog value. This is one Hawaii classic stamp that you can likely afford, even if the earlier stamps are beyond your reach.