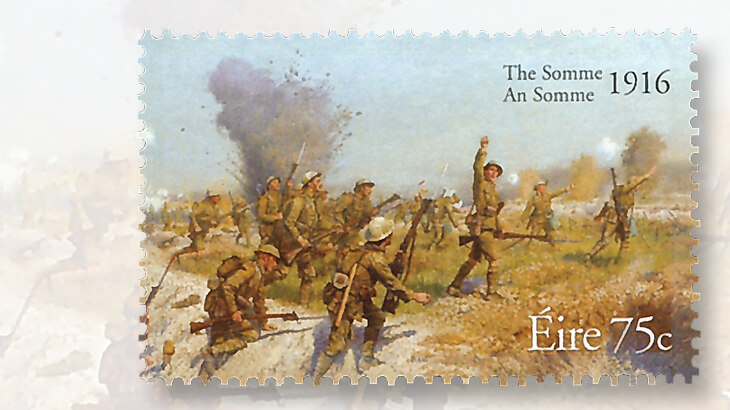 One hundred years ago, soldiers from the United Kingdom, Australia, Bermuda, Canada, India, Newfoundland, New Zealand, South Africa, Southern Rhodesia, and France were battling German troops in the Battle of the Somme. One of the bloodiest battles in history, it raged from July 1 to Nov. 18, 1916, ending without victory on either side.

Ireland was part of the United Kingdom in World War I. Irish soldiers served on all fronts of the war. Approximately 3,500 Irish soldiers were killed in the Battle of the Somme. Of the nine Victoria Crosses awarded for action on the first day of the battle, three were awarded to Irish soldiers.

General interest in the Somme is peaking in this centennial year. Events in Ireland, notably the Easter Rebellion, and the eventual establishment of the Irish Free State have tended to overshadow Irish participation in WWI. With the perspective gained in the passage of time, Irish contributions have begun to be recognized.

On June 26, 2006, Ireland issued a 75¢ 90th Anniversary of the Battle of the Somme stamp (Scott 1672). The 2017 Scott Standard Postage Stamp Catalogue values the stamp in mint never-hinged condition at $2.50, roughly double face value. The stamp is popular with topical collectors of militaria and other related topics. We think it is a good buy in the $2-to-$2.50 price range.