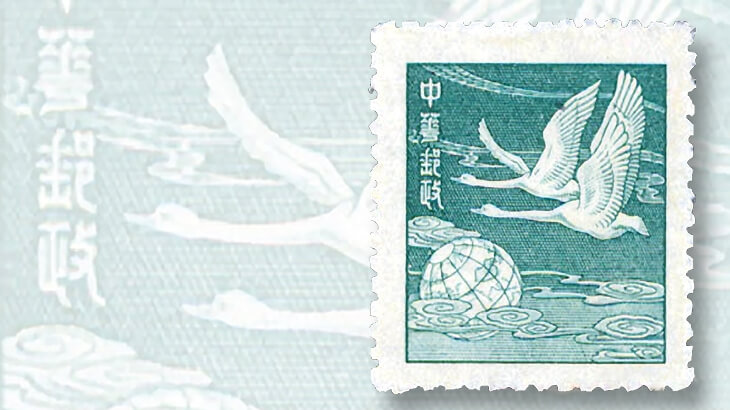 An unissued, nondenominated stamp of Taiwan from 1949, one of perhaps seven known, sold for about $38,500 at the Kelleher Rogers sale in June. 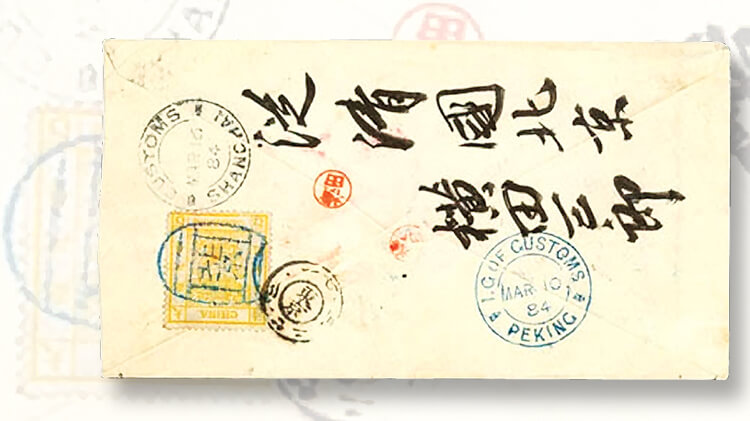 The back of the 1884 cover from Beijing to Tokyo in the Kelleher Rogers sale bears a China 5-candareen Large Dragon stamp. Only two surviving Large Dragon covers to Japan are known. 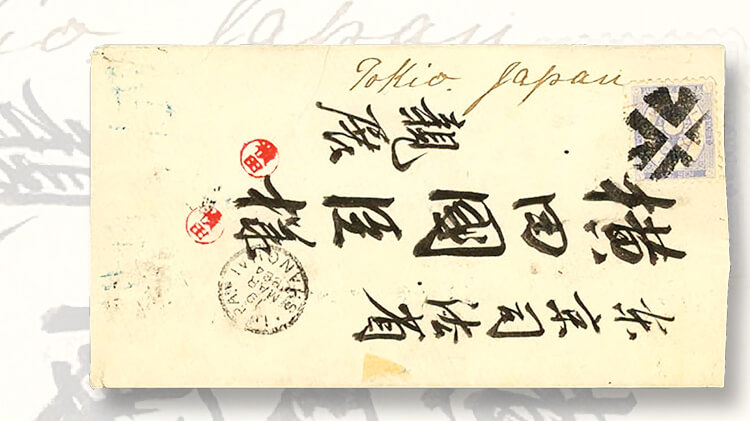 Kelleher and Rogers’ sale in Hong Kong in June offered an 1884 cover from Beijing to Tokyo that had lost a stamp en route, making the piece oddly desirable: It sold for 150,000 Hong Kong dollars ($22,200).
Previous
Next

Kelleher and Rogers held a sale of Chinese and East Asian stamps and postal history in Hong Kong on June 11-12.

An unusual 1884 cover from Beijing to Tokyo, sent via the Imperial Chinese Customs office in Shanghai, was notable for several factors.

The back of the cover bears a China 5-candareen Large Dragon stamp in chrome yellow on thick paper (Scott 9a). To begin with, this makes the cover exceedingly rare, because only two Large Dragon covers addressed to Japan have survived.

Making the cover yet more remarkable is the fact that a 1ca stamp clearly had been applied next to the 5ca (the rate to Japan was 6ca), but it fell off in transit. The partial blue-seal handstamps attest to the missing stamp.

The cover received a Japanese 5-sen stamp for the onward part of its trip when it passed through the Imperial Japanese postal agency in Shanghai, and was not treated as postage due on its arrival in Japan. Remarkably, a Japanese handstamp was applied in the exact spot where the missing stamp had been, as if to vouch for it.

Covers usually are not enhanced by missing stamps. In this case, the opposite was true: It was hammered down for 150,000 Hong Kong dollars, or the equivalent of $22,200, including the firm’s 15 percent buyer’s premium.

An unissued, nondenominated stamp of Taiwan was another highlight of the Kelleher and Rogers sale. The first stamps issued by the Republic of China (Scott 1007-1011) after the Communist takeover of mainland China in 1949 consist of a single design in green depicting geese flying over a globe. The denominations were surcharged in different colors.

The stamp offered by Kelleher and Rogers is the underlying, unsurcharged stamp. It is listed in the S.H. Chan Colour-Illustrated Stamp Catalogue of China as a variety of Chan SPN1. Described as a “magnificent example” and perhaps the finest of the approximately seven known, the stamp sold for about $38,500.