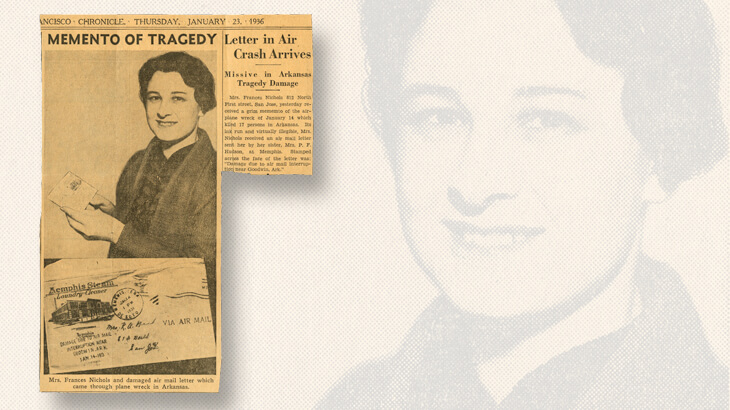 The January 1936 plane crash in Arkansas was noted in the San Francisco Chronicle as part of a story about the delivery of the cover shown with this column. 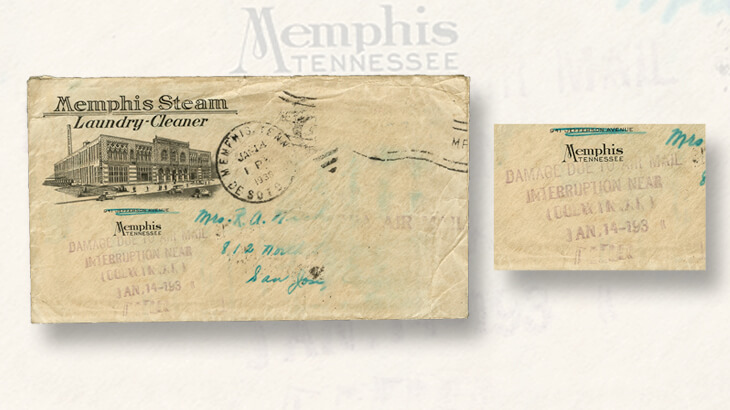 This crash cover doesn’t tell us much, other than the date and location of the “mail interruption.” However, there are other resources that provide a more comprehensive understanding of the event.
Previous
Next

Air crash covers by themselves tell us only the bare details of the event.

For example, the illustrated advertising cover shown with this column was sent from Memphis, Tenn., to San Jose, Calif., in January 1936. The explanatory handstamp at lower left on the cover reads, “Damage due to air mail interruption near Goodwin, Ark. Jan. 14, 1936.”

The handstamp does not even mention that there was a plane crash involved.

The catalog reports that on Jan. 14, 1936, American Airlines AM-23, Trip 1, crashed into a swamp, the cause unknown. Both the pilot and co-pilot were killed in the crash.

The report adds that 150 pounds of damaged mail was salvaged from the crash and forwarded from Little Rock, Ark., on Jan. 15.

This cover also was the subject of an article in the Jan. 23, 1936, issue of the San Francisco Chronicle.

This newspaper report includes a photograph of the addressee, Mrs. Frances Nichols, holding the cover, which her sister in Memphis had sent by airmail.

The short report calls this cover “a grim memento of the air-plane wreck of January 14, which killed 17 persons in Arkansas.”

It also mentions that the ink has run and is almost illegible.

The Internet can be another a good source of background information. In this case, there is a Wikipedia entry, based on information from the websites PlaneCrashinfo.com and Aviation-Safety.net, that provides the additional fact that the 17 killed were 14 passengers and three crew members.

Both of the aforementioned websites state that the cause of the crash could not be determined. Probable causes listed include “passenger interference, fuel exhaustion in one tank, flying below a safe altitude, and/or the co-pilot somehow being alone at the controls.”

The additional information helps to make the cover much more interesting when presented in an album.

For collectors interested in air, sea and other disaster mail, there is an international society devoted to the subject. The Wreck and Crash Mail Society produces a quarterly journal, La Catastrophe, that carries illustrated feature articles, new discoveries, auction realizations, and requests for information from members.

For details on membership, write to Dr. Steven Berlin, 12407 Dover Rd., Reisterstown, MD 21136; or send an email to drstevenjberlin29@gmail.com.

Flurry of airmail issues came to Netherlands Indies in 1928