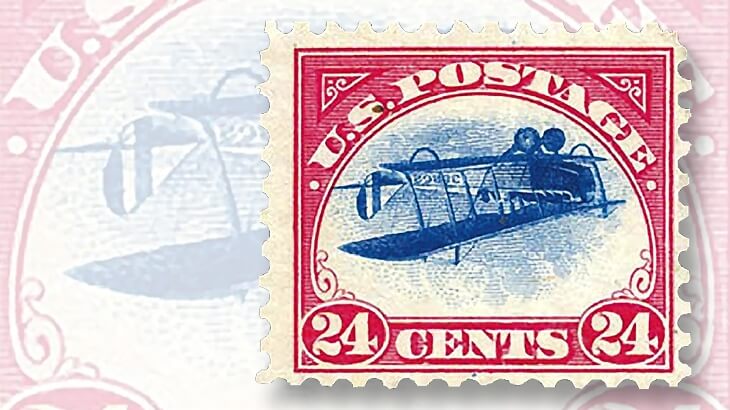 The June 1 auction conducted by Schuyler Rumsey at World Stamp Show-NY 2016 included a 1918 Jenny Invert error stamp from the top row of the sheet of 100. The reperforated stamp sold for $218,500. 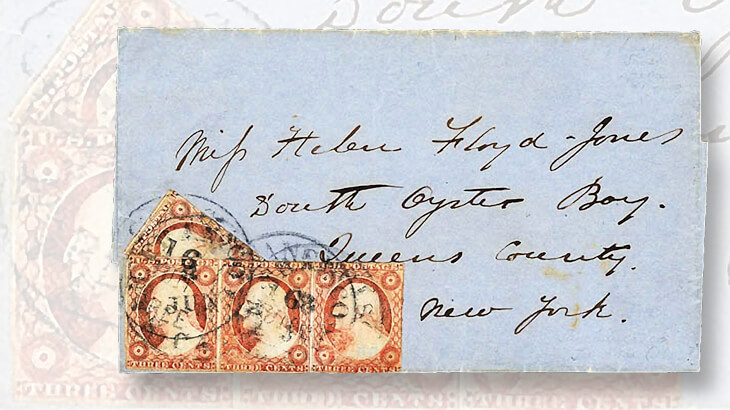 This 1851 cover sold at the Schuyler Rumsey sale paid a 10¢ transcontinental rate using three and a half 3¢ stamps, a rare use of this bisect on cover. It sold for $25,300.
Previous
Next

Schuyler Rumsey also offered an Inverted Jenny (Scott C3a), in this case the example from position 8, in the top row of the original sheet.

The top row (like the right side of the sheet) had a natural straight edge, and the position 8 stamp, with perforations all around, had obviously been reperforated at top at some time in the past by someone looking to improve the stamp’s aesthetic appearance.

With fresh color and “slightly disturbed” original gum, the stamp sold for $218,500 including the 15 percent buyer’s premium that Rumsey adds to all lots.

A beautiful cover with four examples of the 1847 5¢ Franklin (Scott 1), tied by blue Philadelphia postmarks to a cover going to Greenville, Va., was described as “one of the most attractive domestic uses of the 5¢ 1847 issue.” With a long and equally attractive provenance, it sold for $19,550.