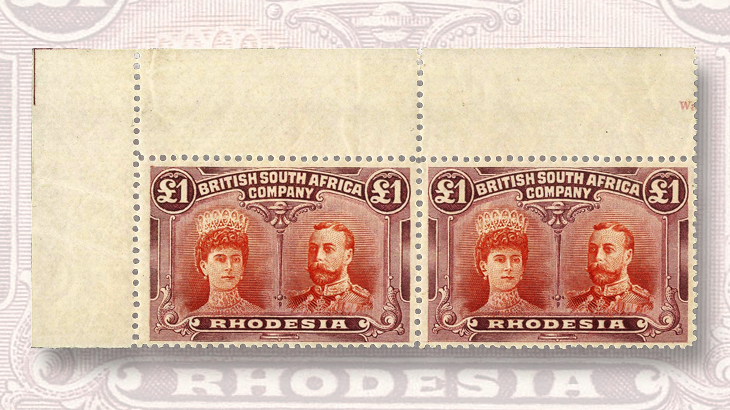 The upcoming Spink UK auction taking place July 26-27 will include this variety from Rhodesia’s 1910-13 Double Head issue: the £1 scarlet and reddish mauve error as a corner margin pair with the additional “long gash in queen’s ear” variety on the stamp a

Spink UK in London will auction Part VI of the Lionheart collection of Great Britain and British Empire on July 26, followed by additional worldwide material in the Spink Collector’s Series sale.

The second sale begins in the afternoon (London time) of July 26 and concludes the following day.

The Lionheart collection sale opens with nearly 50 lots of Great Britain, including a small selection of Officials from 1883-1902.

The British Commonwealth material in the rest of the 373-lot sale provides offerings from every corner of the empire on which the sun never set.

From British Guiana, in the northern reaches of South America, comes a close relative of the world’s most valuable stamp. This used example of the 1856 4¢ black on magenta (Scott 14) is cut in a rectangle, not in the octagon shape of the unique 1¢ (13) that sold for $9.5 million just a little more than two years ago.

The 4¢ stamp has large margins but also a tiny pinhole at left, according to Spink, which describes it overall as “a splendid example of this extremely rare stamp.” It is accompanied by a 1925 RPS certificate and listed with an estimate of £4,000 to £5,000.

The next lot, also from British Guiana, is an engraved die proof of the 1860 4¢ Ship design with figures in corners, in gray black on thin surfaced card measuring 101 millimeters by 82 mm.

The Collector’s Series sale offers more than 1,400 lots of stamps and postal history from the Commonwealth and throughout the world.

The sale includes a broad range of British prestamp postal history leading into Mulready envelopes and a big selection of Penny Black stamps (Scott 1) off cover and on.

A strong presentation of Rhodesia’s 1910-13 Double Head issue includes an upper left corner margin pair of the £1 scarlet and reddish mauve error with the variety known as “long gash in queen’s ear” on the right-hand stamp (position 2).

“A monumental rarity with only one other error Gash in Queen’s ear item known, and a great showpiece of Rhodesian philately,” Spink notes.

The auction catalog description adds that there are some hinge remnants in the margin, with the two stamps sharing a single hinge mark, and a horizontal crease in the left margin just extending in to one stamp, “otherwise fresh and fine.”

The catalogs for both the Lionheart and the Collector’s Series sales can be viewed online as a downloadable PDF, or as an eCatalogue. Online bidding opportunities are also available.