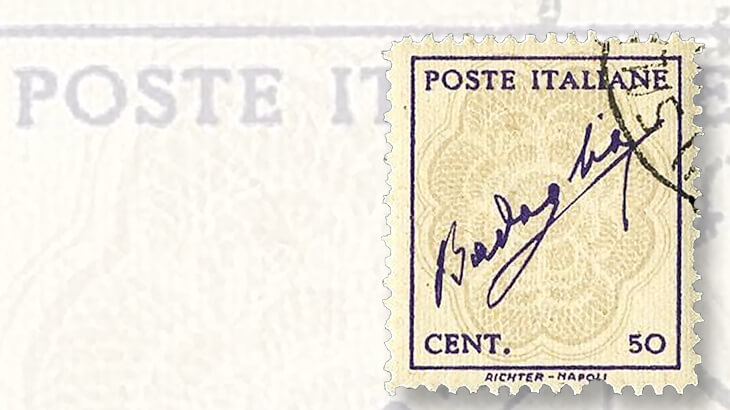 A proposed but unadopted stamp design to replace the fascist issues of Italy after World War II used the signature of Gen. Pietro Badoglio. A set of four essays in different colors sold for $2,630 at Spink’s sale of the Fantaroni collection. 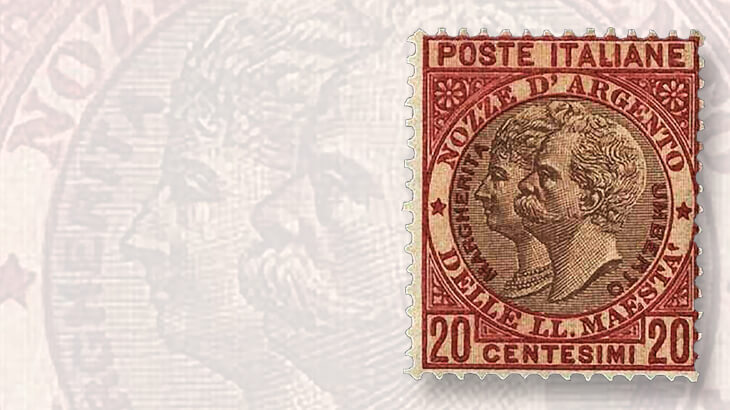 Offered by Spink Auctions in June, from the Stefano Fantaroni collection of Italy, this essay printed in red, brown and beige for an issue honoring the king and queen on their silver wedding anniversary sold for $480. 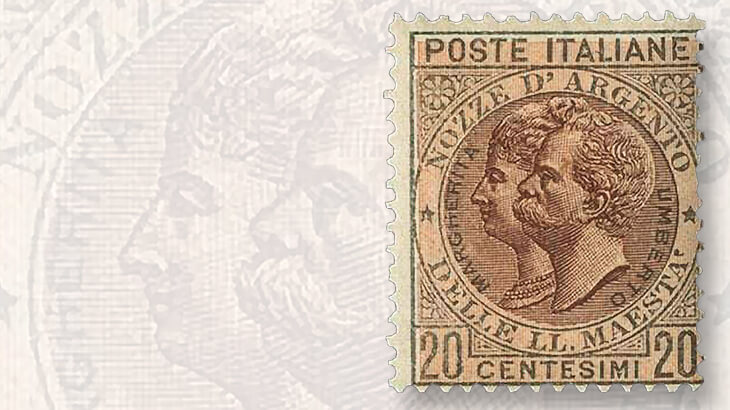 An essay for the silver wedding anniversary of Italy’s King Umberto I and Queen Margherita, printed in olive green, brown and beige, brought $1,800 at Spink’s New York auction in June. 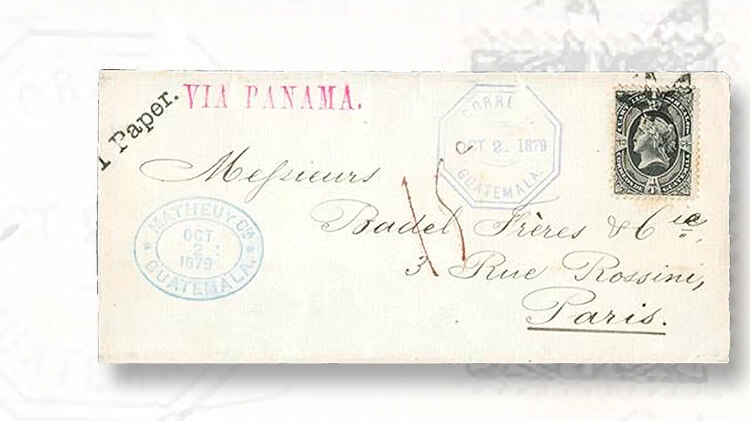 Spink offered the Jose Castillejo collection of Guatemala in June, including the only known specimen of the 1875 ¼-real on a newspaper to a foreign country. It sold for $7,287.50.
Previous
Next

Spink USA offered a pair of specialized sales — the Stefano Fantaroni collection of Italy and the Jose Castillejo collection of Guatemala — on June 8 in New York.

Although Italy did not issue its first commemorative stamps until 1910, the idea had been mulled as far back as 1893, with essays prepared for an issue honoring the 25th anniversary of King Umberto I’s marriage to Queen Margherita.

The design, showing the royal couple’s portraits in profile surrounded by the words “Nozze D’Argento Delle Ll. Maesta” (Their Majesties’ Silver Nuptials), with the words “Poste Italiane” at top and a denomination of 20 centesimi at bottom, was printed in red, brown and beige. The essay is listed in the Sassone Catalogo dei Francobolli d’Italia as Sassone 64A.

The unissued stamp, with average centering and hinged original gum, sold for $480, including Spink’s 20 percent buyer’s premium for lots under $2,000.

An example of the same design but in olive-green, brown and beige (Sassone 64B), a much scarcer color combination, with better centering and never-hinged gum, went for $1,800.

Umberto was assassinated on July 29, 1900, an act that supposedly inspired the assassination of U.S. President William McKinley the following year.

Probably the most interesting period in Italian history, philatelically speaking, was the end of World War II. The chaotic situation as Allied forces chased German and fascist forces up the boot led to numerous provisional issues on both the Allied and fascist sides.

King Victor Emmanuel III sacked the dictator Mussolini in September 1943, replacing him with Gen. Pietro Badoglio, the longtime head of the Italian armed forces. The end of fascism required a new stamp issue, freed from the iconography of the Mussolini era.

One proposed design had a machine-turned security pattern printed behind a simple frame with the words “Poste Italiane” and the denomination of 50 cent[esimi]. Printing was entrusted to a private firm in Naples, which was by that time firmly under Allied control. In an attempt to reassure citizens that Italy was still sovereign, rather than under Allied occupation, Badoglio’s signature was placed at the center.

(Badoglio, favored by the British as a bulwark against Communist influence, was not prosecuted for war crimes despite his heinous use of chemical weapons against Haile Selassie’s troops in Ethiopia in the 1930s. He died in 1956.)

Four different color combinations of the Badoglio design were prepared on a variety of papers. A set of four different colors on rough brownish paper, with full gum on the back and favor cancels on the front, was described as “extremely rare.” Listed as Sassone 515F-I, the set of essays sold for $2,630.

The king rejected this design, and Badoglio’s signature was replaced with an image of a she-wolf suckling the infants Romulus and Remus: the legend of the founding of Rome. Those stamps were issued in 1944 as Italy Scott 439-440.

The Central American nation of Guatemala issued its first engraved stamps in 1875, depicting an allegorical Liberty head, in denominations ranging from ¼ real to 2r (Scott 7-10). The lowest denomination was for local letters and cards, as well as for periodicals sent overseas. Examples of the latter usage on cover are elusive, however, as most newspaper wrappers would have been torn up and discarded.

A fresh example of the ¼r tied to an Oct. 2, 1879, “pristine” wrapper addressed to France, was described as the only known example of this issue on a newspaper to a foreign country and “a great Guatemalan rarity.” It is also the last known use of a stamp from Guatemala’s Liberty series, because they were demonetized three weeks later. It sold for $7,287.50.