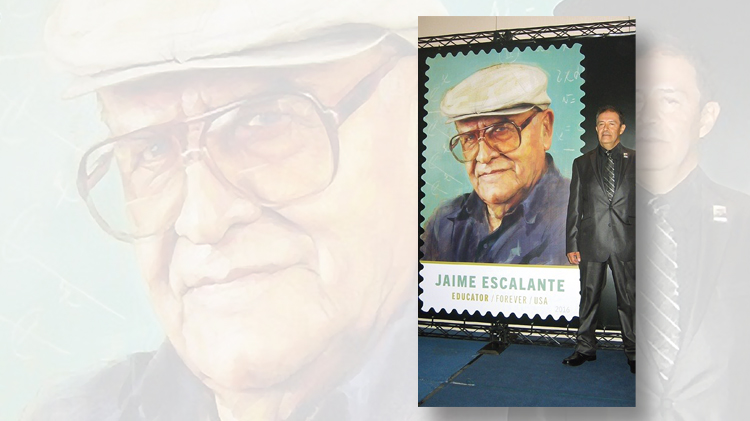 They laughed. They cried and they clapped.

All that emotion — and more — poured out in a Washington, D.C., hotel as members of the League of United Latin American Citizens welcomed a forever stamp honoring one of their own.

The July 13 issuance of the Jaime Escalante commemorative stamp honored a Bolivian native who came to California and became renowned for teaching mathematics to students some regarded as “unteachable.”

That was a label that Escalante never placed on his students at Garfield High School in an impoverished area of East Los Angeles.

Actor Edward James Olmos, who played Escalante in the 1988 movie Stand and Deliver, said simply, “He was a giant of a man.”

Screenwriter Tom Musca told the ceremony attendees that “he wasn’t the teacher that we all wanted. He was the teacher we all needed.”

But it was Escalante’s son Jaime W. Escalante II who brought many to tears as he recalled the obstacles that his father faced in order to get a classroom job in America.

His father had already achieved success teaching math in Bolivia, but California school systems insisted he return to college and get degrees in the United States.

Escalante did that, but his teaching methods didn’t gain much attention until 14 of his students were accused of cheating on an advanced placement exam in 1982.

To resolve the issue, Escalante urged that the accused students retake the exam. Twelve of the 14 did. All 12 students passed, creating much acclaim for the teacher and leading to the movie about how he had motivated his students.

Olmos hailed the stamp as a symbol of the growing influence Latinos are having in America.

“We dominate the hemisphere,” he said, predicting that Latinos will have the same influence here in the United States.

Without making any reference to politics, Olmos said that the timing of the stamp could not be more crucial.

He thanked the Postal Service for issuing the stamps and urged the audience to buy as many of the new stamps as they could afford.