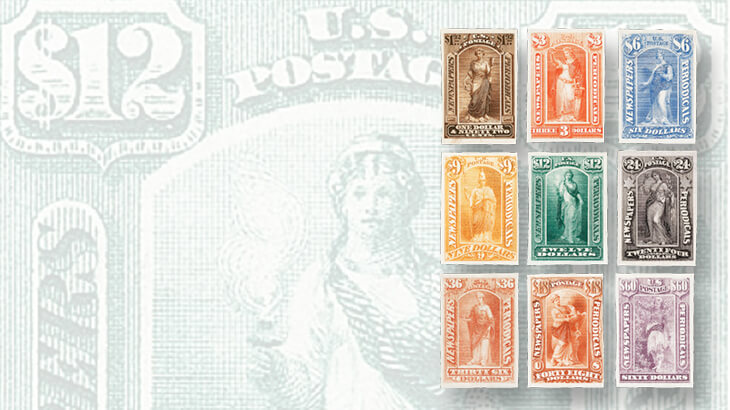 A set of nine imperforate examples of the 1895 special printings of newspaper stamps, ex-Earl of Crawford and latterly in the Inman collection, sold for $28,750 at Siegel’s June 21 sale. 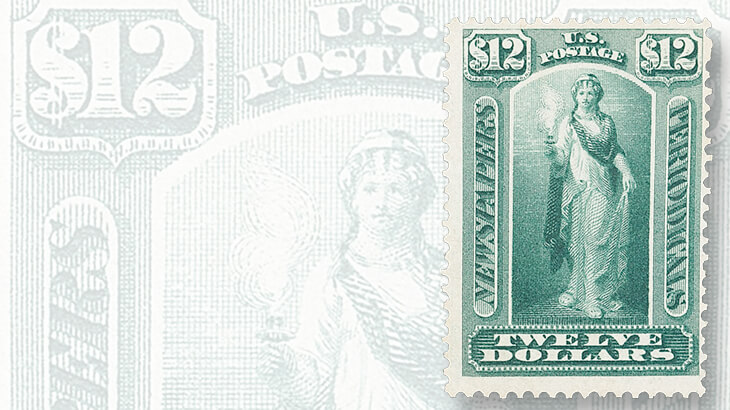 An example of the $12 green 1875 Continental Bank Note Co. printing of newspaper stamps, one of two known, sold for $172,500 at the June 21 auction of the Inman collection, by Robert A. Siegel Auction Galleries. 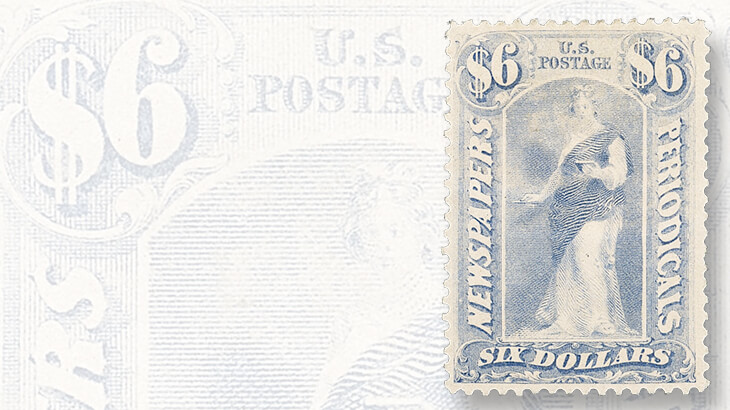 A sound, well-centered, original-gum example of the $6 Bureau of Engraving and Printing issue of 1894, one of only one used and 15 unused survivors of this newspaper stamp, brought $28,750 at the June 21 Siegel auction. 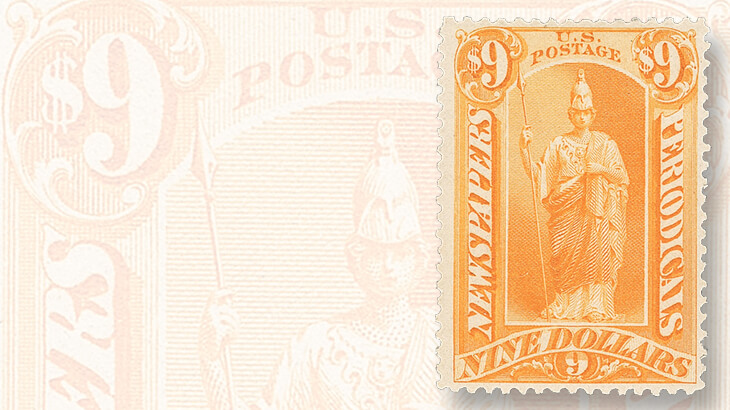 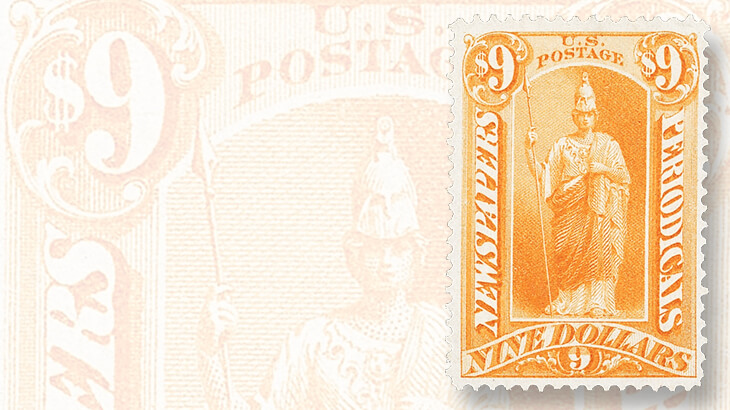 The only recorded example of the 1875 Continental Bank Note Co. printing of the $9 newspaper stamp, from the Grant Inman collection, brought $356,500 at the Siegel Auction Galleries sale on June 21.
Previous
Next

June 21 saw the first part of the Grant Inman sale, with 19th-century stamps for newspapers and periodicals, while June 22 brought stamps and postal history of the U.S. Civil War, including the Confederate States of America.

The United States issued stamps for bulk payment on newspapers and periodicals beginning in 1865; after several issues (including special reprints), this category of stamps was discontinued in 1898.

Unlike those in other countries, newspaper stamps in America were not applied to the individual newspapers being mailed. Instead, they were affixed to receipts, and generally retained by the post office. They tended to be canceled, if at all, with brush or pen strokes, or a cork handstamp.

The first three U.S. newspaper stamps were typographed and embossed, measuring 2 inches wide by 3.75 inches high, making them among the largest stamps ever issued by any nation. Their unique designs served as the inspiration for the U.S. Postal Service commemorative stamps honoring World Stamp Show-NY 2016.

Along with other 19th-century U.S. stamps, newspaper stamps were reprinted in 1875 for the 1876 Centennial International Exhibition. Thanks to their extremely high face values, ranging up to $60, the top denominations of these ungummed reprints practically didn’t sell at all, and only one or two examples survive.

The $9 Continental Bank Note Co. special printing (Scott PR51) is one such rarity. Only a single example is recorded, making it one of the rarest of U.S. stamps. Although 500 were printed in 1875, a decade later the government still had 496 on hand: Two had been bought by a German dealer, and one apiece were purchased by Stanley Gibbons and a Mr. Anthony. Over time, sadly, three of those four have been lost to philately.

The unique brilliant yellow-orange stamp depicting the Roman goddess Minerva, well-centered on bright white, ungummed paper typical of special printings, found a new owner for $356,500, including the 15 percent buyer’s premium added by Siegel to all lots.

The next denomination, a $12 green showing the goddess Vesta (Scott PR52), is one of just two known, having previously been part of a pair. Five examples of this stamp were originally sold; again, three are lost. This stamp sold for $172,500.

Imperforate examples of the special printing stamps also exist, and are mentioned (though not listed) in the Scott Specialized Catalogue of United States Stamps and Covers, with a value of $60,000 assigned to the set.

The imperfs originally were acquired as strips of five by the famous 19th-century collector James Ludovic Lindsay, 26th Earl of Crawford, although it is not known exactly how he came by them. After his death, the strips were broken up and three full sets are known to survive, together with a partial set (from $1.92 upwards) in the Inman collection.

This partial set of nine sold for $28,750, an amount that seems a bargain given the imperfs’ rarity.

When the contract for printing U.S. stamps passed to the American Bank Note Co., the same newspaper-stamp designs were printed by that firm in 1879 for regular use.

The government’s Bureau of Engraving and Printing took over the production of stamps in the early 1890s, and reissued many of the denominations up to $6. Only small quantities survive.

Inman, a West Coast investment manager and a stamp collector since 1978, previously sold his collection of U.S. regular issues through Siegel for several million dollars. The sale of his back-of-the-book collection will continue in several more parts.