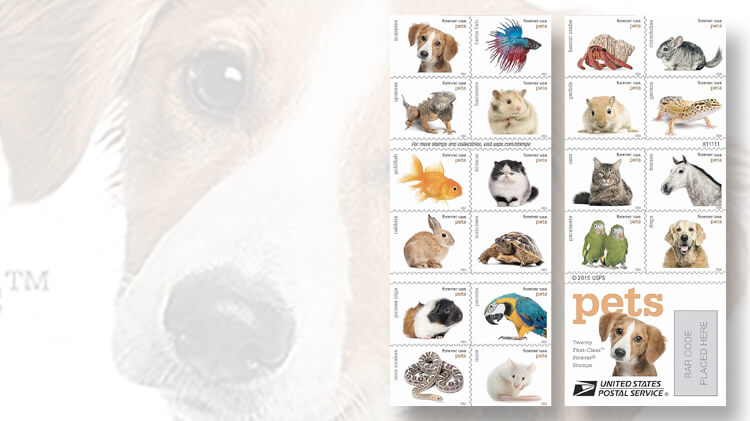 Twenty different domesticated animals are featured in the upcoming Pets set of forever stamps. The stamps will be issued with an Aug. 2 first-day ceremony in Las Vegas, Nev. 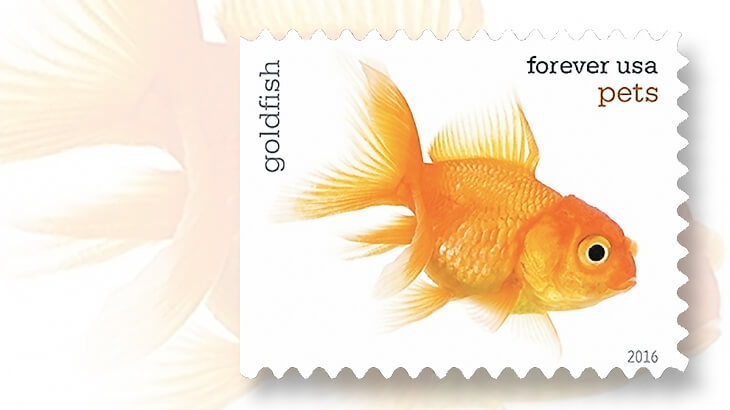 This Goldfish forever stamp pictures one of 20 animals in the United States Postal Service’s Pets stamps set, to be issued Aug. 2 in a double-sided pane. 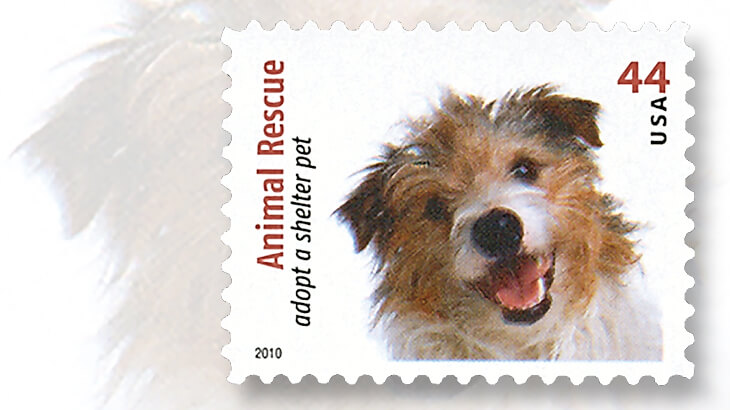 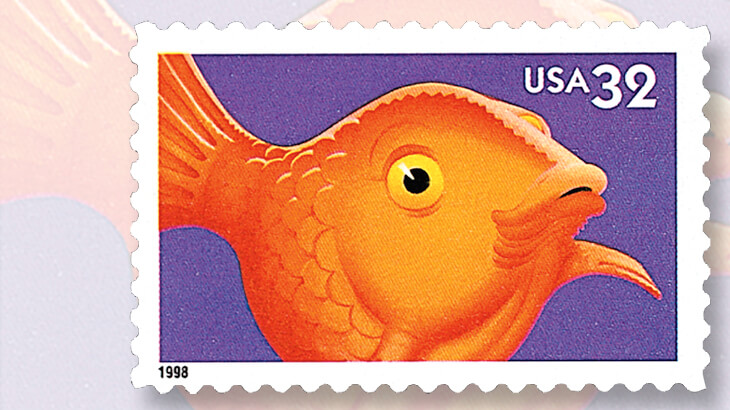 The United States Postal Service will issue its set of 20 nondenominated (47¢) Pets forever stamps on Aug. 2, with a first-day ceremony in Las Vegas, Nev.

Postal Service representatives have told Linn’s that the ceremony will be open to the public. Chief Marketing and Sales Officer and Executive Vice President Jim Cochrane is the dedicating official who will represent the USPS.

The 20 stamps are being issued together in a double-sided pane of 20, described as a booklet by the Postal Service. Each stamp shows a photograph of one pet: puppy, betta fish, iguana, hamster, goldfish, kitten, rabbit, tortoise, guinea pig, parrot, corn snake, mouse, hermit crab, chinchilla, gerbil, gecko, cat, horse, parakeet, and dog.

The stamp designs use existing photographs by Eric Isselee of the different animals, each with a white background.

Each design also includes a word or two to describe the pet group the pictured animal represents (such as, “guinea pigs”), along with “forever usa” and the word “pets.”

The designer for this issue is USPS art director Derry Noyes, who was inspired by her lifelong love of animals, according to the Postal Service.

“The goal was to capture the essence of each animal,” she said. “There’s no need for special effects. The animals speak for themselves. I love the variety of shapes, colors, textures, and facial expressions.”

The Postal Service ordered a large initial print run of 400 million Pets stamps, a sign, perhaps, that USPS officials expect the Pets stamps to be popular with the stamp-buying public.

That earlier set was so popular that the initial print run of 300 stamps was bolstered by a second printing of 91.4 million stamps announced six months after the stamps were first issued.

Animals have always been popular with topical stamp collectors, and dogs, cats and birds are among the favorite subjects. Pets are also popular with the American public, according to the Postal Service, with more than half of U.S. homes having at least one pet.

“The most common pets are dogs and cats,” the Postal Service noted. “These furry, four-legged family members have long provided love, friendship, and sometimes protection for their owners.”

The digital color first-day postmark for the Pets issue features silhouette images of six different animals, each in a bold, solid color: horse, goldfish, snake, dog, cat, and parrot. This postmark is used on certain uncacheted first-day covers sold in a set of 20 by the Postal Service.

Press sheets consisting of 160 stamps (eight panes of 20) are being offered as well. The total number of press sheets made available to collectors was not announced.

Technical details and first-day cancel ordering information for the Pets forever stamps issue can be found below.

Standard ordering instructions apply. Collectors requesting first-day cancels are encouraged to purchase their own stamps and affix them to envelopes. The first-day cover envelopes should be addressed for return (a removable label may be used), and mailed in a larger envelope addressed to Pets Stamps, United States Postal Service, Attn: Marilyn Wassell, 1001 E. Sunset Road, #2009, Las Vegas, NV 89199-9998. Requests for first-day cancels must be postmarked by Oct. 2.

Songbirds in Snow stamps: When and where they’ll be issued