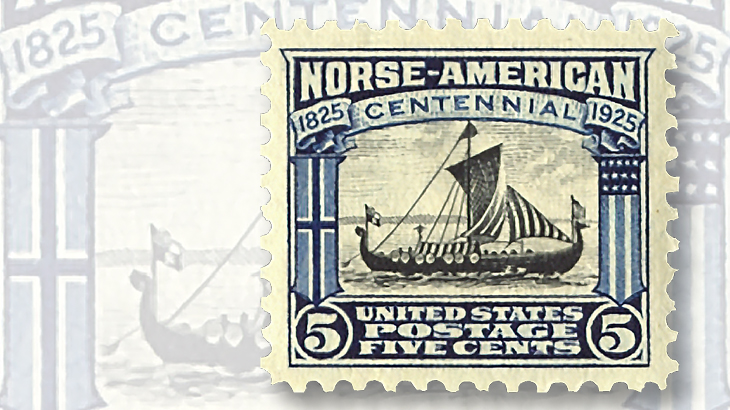 The United States 5¢ Viking Ship stamp (Scott 621) from the 1925 Norse-American set is a good buy on a UPU-rate international commercial cover at up to $25.

Immigration is a hot topic in politics at present, if not in stamp collecting. One of the most beautiful sets of classic U.S. stamps is the set of two Norse-American stamps issued May 18, 1925 (Scott 620-621). The stamps were issued to commemorate the 100th anniversary of the arrival of the first group of immigrants from Norway to the United States.

The higher face-value 5¢ stamp is as unusual in topic as it is striking in design for a U.S. stamp of the period. The design features a Viking long ship.

The model for the design was actually a 19th-century replica ship that crossed the Atlantic from Norway to Chicago for the 1893 Columbian Exposition. A clue that the design was not meant to depict an actual Viking ship is that it displays an American flag from the ship’s bow.

The 2016 Scott Specialized Catalogue of United States Stamps and Covers values the 5¢ Viking Ship stamp at $20 in mint never-hinged condition. It is a bit over-valued and is a good buy at $10 to $15.

The catalog also values the stamp on a Universal Postal Union-rate international cover at $17.50. We think that an attractive commercial cover would be a good buy at up to $25.

Read more about stamps collectors are looking for: