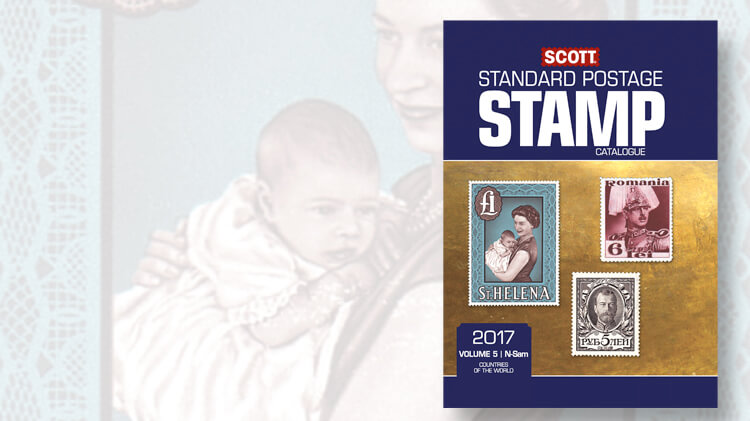 Vol. 5 of the 2017 Scott Standard Postage Stamp Catalogue includes listings and values for countries of the world N-Sam (Samoa).

More than 9,100 value changes are recorded for Vol. 5 of the 2017 Scott Standard Postage Stamp Catalogue, which spans countries of the world N-Sam (Samoa), and Nicaragua and Portugal are among the countries in Vol. 5 whose values reflect increases.

Vol. 5 is available for purchase Aug. 1. Order yours today!

As is true for many countries, value changes for Nicaragua stamps issued from 1990 to present show a mix of increases and decreases. Among modern issues, the 1993 sheet of 16 1.50-cordoba stamps featuring butterflyfish (Scott 1962) slides from $10 mint to $8. Value changes also were made among the back-of-the-book issues. The 1980 International Year of the Child sheet of two airmail stamps (C970) has been given a value of $21 in italics, indicating that the sheet is difficult to value accurately. Among the revenue stamps surcharged in 1907 for Official use, the 1p on 2c orange with inverted surcharge skyrockets from $2.50 both unused and used to $14 in both conditions.

The editors gave the South American country of Paraguay a close inspection this year, focusing on the stamps issued from 1940 to present. This review yielded almost 3,800 value changes. From 1950 to 1999, most of these changes are in a downward direction. Values for stamps issued from 2000 to date remain steady or show some increases. Increases also are found among the Portugal stamps inscribed for use in Azores and Madeira. The Azores 2004 Worldwide Fund for Nature (World Wildlife Fund) horizontal strip of four (Scott 480) jumps from $3 mint to $5.

St. Vincent Grenadines received a full line-by-line review. Although most of the almost 1,400 value changes reflect decreases for stamps issued prior to 2002, increases are found among later issues. The 2007 sheet of four stamps issued for the Grenadines island of Bequia to honor Halley’s comet (Scott 413) jumps from $6 mint and used to $6.50 both ways. The souvenir sheet from the set (414) rises from $4.50 mint and used to $4.75 in both conditions.

The more than 40 value changes in Northern Nigeria reflect increases.

More than 1,000 value changes occur in Pitcairn Islands, with a few scattered increases.

Among the value changes for St. Thomas and Prince Islands is an increase in the value of the 1977 sheet of four stamps featuring paintings by Peter Paul Rubens. The sheet (Scott 473a) goes from $27.50 mint and used to $40 in both conditions. The 2½-reis brown newspaper stamp (P13) issued in 1899 moves upward, from $25 unused to $30.

More than 65 value changes were made among the stamps of Pakistan. A mix of increases and decreases are found. The 15-rupee dark green and dark brown (Scott 18) climbs from $65 unused to $90, while the 25r dark violet and blue-violet stamp (19) from the same set is adjusted downward, from $87.50 unused and used to $70 in both conditions.

Almost 100 value changes are sprinkled throughout the Philippines. Most of these changes reflect increases, with a few decreases. Among the surcharged issues of 1879, the 8 centimos on 100 milesimas de peso (Scott 75) jumps from $300 unused to $400. The used value for the 1985 3.50-peso on 4.20p rose, type III, soars from 90¢ to $3. Other used values within the modern period show increases, with only a few decreases.

A few changes were made to the values of Nyasaland Protectorate stamps. The 1918 4-shilling black and red stamp on chalky paper increases from $45 unused and $85 used to $50 and $90, respectively.

Several new listings for Russia have been brought over to the 2017 Vol. 5 catalog from the 2016 Scott Classic Specialized Catalogue of Stamps and Covers 1840-1940. A center inverted variety of the 1884 3.50-ruble black and gray stamp is now listed as Scott 39b. Dashes are placed in the unused and used value columns, indicating that the stamp exists in both conditions, but there is insufficient information to establish a value. The 1909-12 1r with center inverted, previously listed as 87e, has been renumbered as 87f. No. 87e has been assigned to a new listing of a vertical pair, imperforate between, valued at $25 unused with a dash in the used column. The center-doubled variety is now listed as 87g.