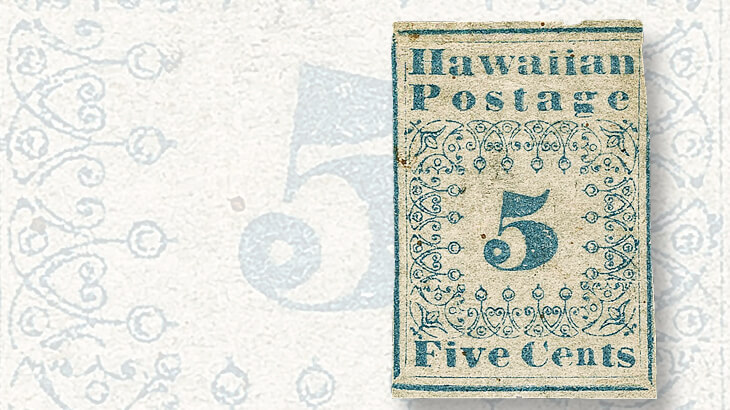 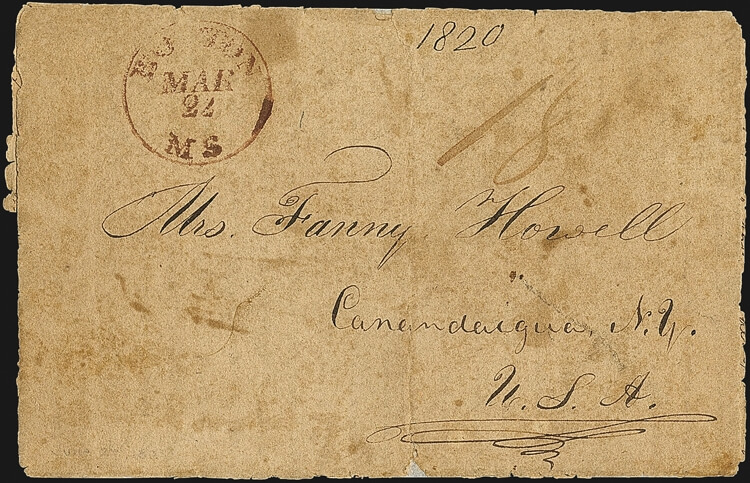 The May 29 Robert A. Siegel auction of the William H. Gross collection of Hawaii included this prestamp cover mailed in 1820 that sold for $29,900 at the sale held at World Stamp Show-NY 2016. 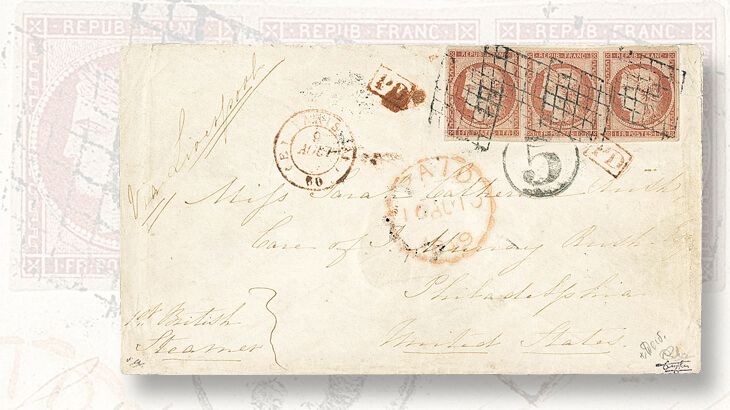 An unusual pale shade of the 1-franc Ceres stamp was used in a strip of three to frank this 1849 cover to the United States. Called the highlight of Walske’s collection, it sold in the Siegel auction for $97,750. 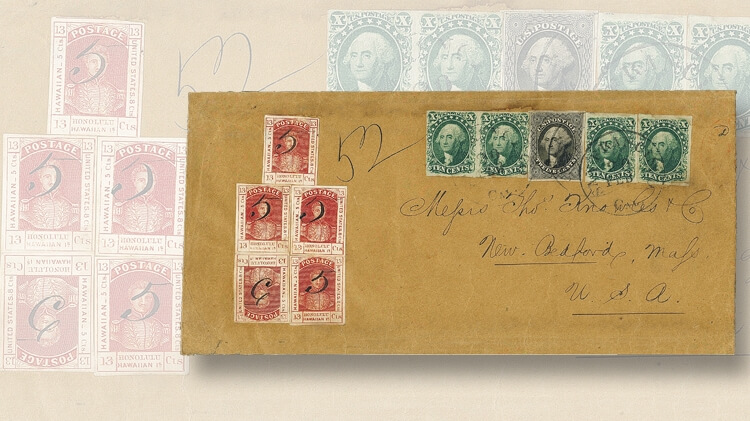 On this piece of Hawaii postal history from the William H. Gross collection, five examples of the provisional manuscript “5” surcharge on the 13¢ King Kamehameha III issue of 1857 pay the quintuple rate for a letter weighing between 2 ounces and 2½ ounces 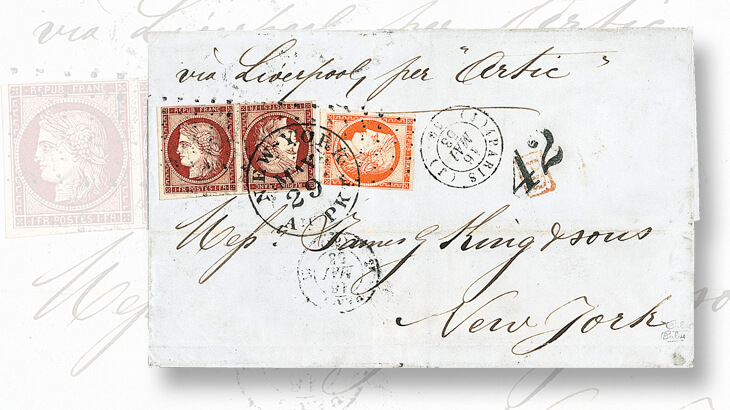 An 1850 cover franked with a tete-beche pair of the French 1-franc Ceres stamp sold for $63,250 during the sale of the Walske collection. 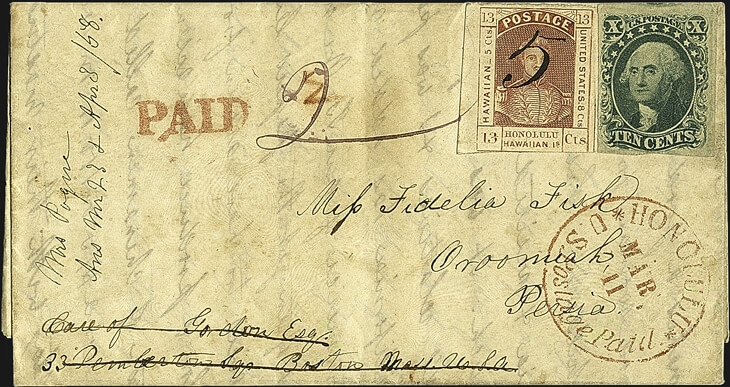 Mailed in 1857 from Hawaii to Persia (present-day Iran), this cover franked with a single Hawaii 5¢ provisional stamp and a United States 10¢ stamp sold for $138,000. 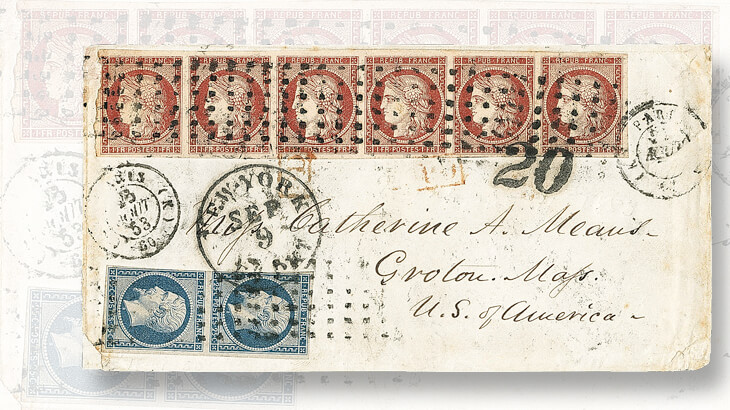 The May 29 Robert A. Siegel auction of the Steven Walske collection of trans-Atlantic mail included an 1853 cover from Paris to Massachusetts franked with a strip of six of the 1849 1-franc Ceres stamp, which sold for $34,500.
Previous
Next

The sale of the Gross collection of Hawaii was previously reported in the June 2 daily edition of Linn’s Stamp News prepared and distributed to attendees while World Stamp Show-NY 2016 was still going on. It included rarities from the earliest “Missionary” issues of 1851 up to rare provisional-government overprint errors of 1893.

As with all seven previous auctions of Gross’s worldwide stamp collection and the recent private-treaty sale of his Swiss collection, proceeds went to charity — in this case, the Hawaii Foodbank and the Smithsonian’s National Postal Museum, among others.

The sale began with prestamp postal history, including an 1820 cover that was said to have been the first letter to arrive back in the United States from missionaries in what were then called the Sandwich Islands. A modest starting bid of $13,000 was quickly run up to double that amount, with Carey hammering it down for $26,000, plus the 15 percent buyer’s premium Siegel adds to all lots, for a total of $29,900.

Hawaii’s first stamps of 1851, known as the “Missionaries,” were well represented in the Gross collection by both unused and on-cover examples.

The absolute highlight of the sale was the storied 1857 cover bearing a remarkable five examples of a provisional “5” manuscript surcharge on the 13¢ King Kamehameha III issue (Scott 7), along with four U.S. 10¢ stamps of 1855 (14, 15) and a 12¢ of 1851 (17). The mixed franking paid the quintuple rate for postage from the islands to California and thence to Massachusetts, plus a 2¢ ship captain’s fee. After spirited bidding, it sold for $253,000.

Another cover with a single Hawaii 5¢ provisional and U.S. 10¢ stamp, mailed in 1857 to a missionary in the extraordinary destination of “Oroomiah, Persia” (today Urmi, Iran) sold for $138,000.

With every item selling and winning bids well distributed among more than two dozen buyers, the total hammer was $1,576,575, or just over $1,813,000 with the buyer’s premiums.

The room was packed with French speakers for the Walske sale, including three generations of the well-known Behr family of Parisian stamp dealers and auctioneers, whose paddle went up frequently as Siegel president Scott Trepel called the sale.

Highlights included a magnificent 1853 cover sent from Paris to Groton, Mass., via New York, franked with a strip of six of the 1-franc value from France’s first issue, the Ceres design of 1849, in a special shade of cherry-red known as cerise (variety of Scott 9). Completing the franking was a pair of 25-centime President Louis Napoleon stamps (11).

Early stamps of many countries were essentially handmade, and France’s were no exception. The colors of ink used could vary considerably, and specialist collectors, after extensive study, can often assign particular shades of color to particular printings and periods of use. The cerise shade of the 1fr has only been recorded as having been used in Paris during August 1853.

Adding to the cover’s interest is the fact that it left France as a quintuple-rate letter, but on reaching the U.S. was assessed for American postage at a quadruple rate, owing to the different systems of weights and measures in each country. This is indicated by the large “20” stamped on the cover, meaning 20¢ was due: Letters could not be fully prepaid by their senders at that time, so each country collected its share of the postage.

Among classic stamps of France, the collecting of tete-beche pairs has been popular since the 19th century.

Tete-beche, which means “head-to-tail” in French, refers to pairs in which one stamp is upside-down in relation to the other. In the case of the Ceres issue, this occurred accidentally when one impression in a printing plate had to be repaired, and would be carelessly replaced inverted. Sometimes, inverted pairs wound up on cover, and these are highly desirable.

An 1850 cover with a tete-beche pair of the 1fr dark carmine (Scott 9a), sent to New York on the steamer Arctic (which later sank with the loss of hundreds of lives), sold for $63,250.

The high realization of the sale went to a letter carried via Liverpool to Philadelphia and franked with a strip of three of the scarce dull vermilion shade of the 1fr Ceres (variety of Scott 8).

This pale shade was only in use briefly during 1849, and there was only a four-month window when this stamp could be used to prepay letters overseas. Just five covers sent outside France survive with this shade, and only one to the United States. Additionally, it is the second-largest multiple of this shade known on cover. Called “the highlight of the Walske collection,” it sold for $97,750.