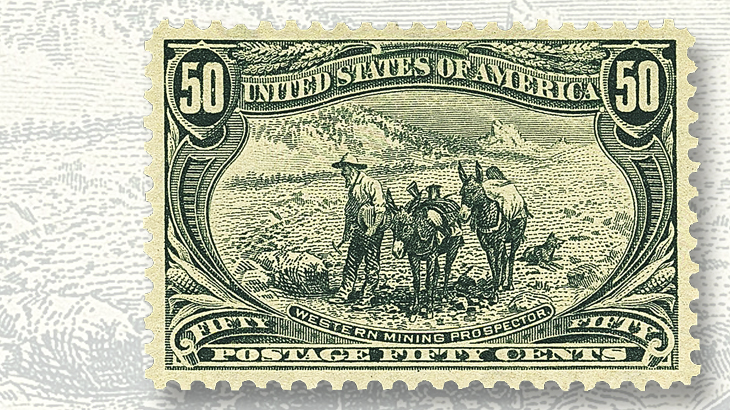 Described as the finest mint never-hinged example in existence and the only one graded superb-98, this 50¢ Western Mining Prospector stamp sold for $54,625 at the Siegel auction of the first part of the Hanover collection in April. 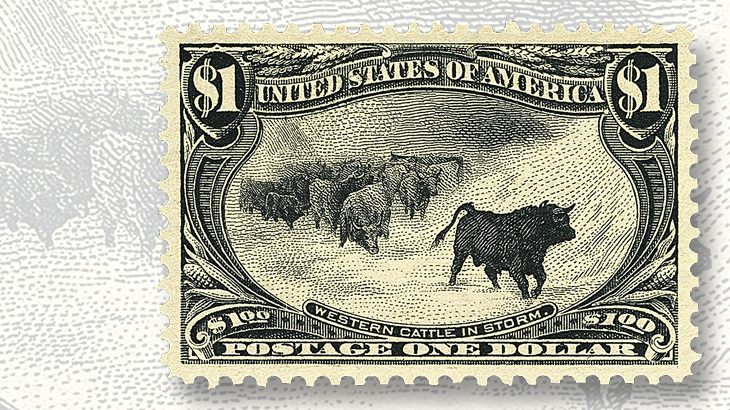 Graded superb-98, this $1 Western Cattle in Storm stamp from the Trans-Mississippi series brought $71,875 at Siegel’s auction in April. 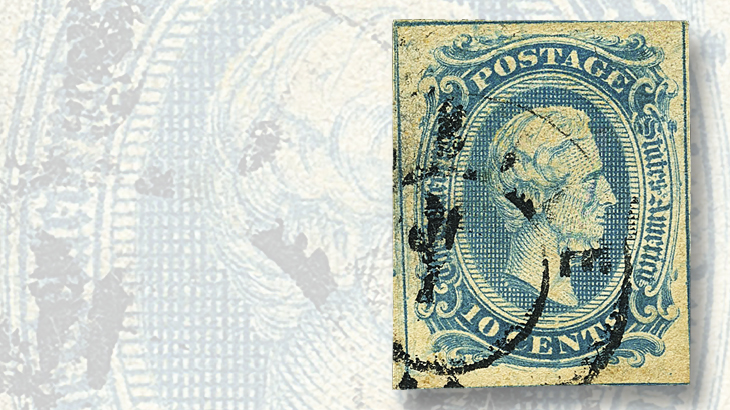 A rare large-margined example of the 1863 10¢ Jefferson Davis stamp with a frameline on all sides brought $6,900 at Robert A. Siegel’s May auction. 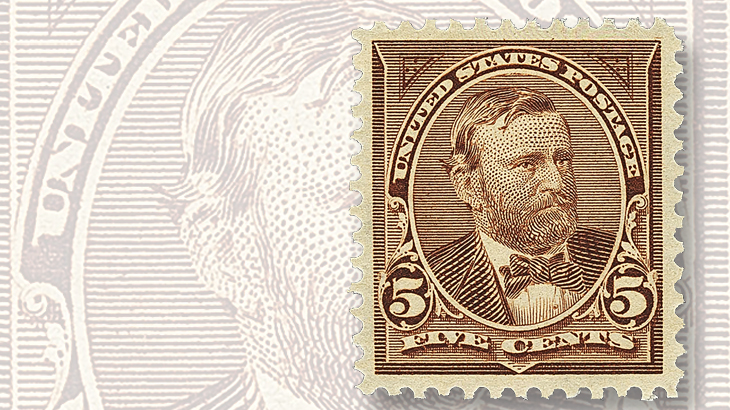 A handsome example of the 5¢ Grant stamp from the 1895 Bureau issue with double-line watermark was sold by Siegel for $345 in April. 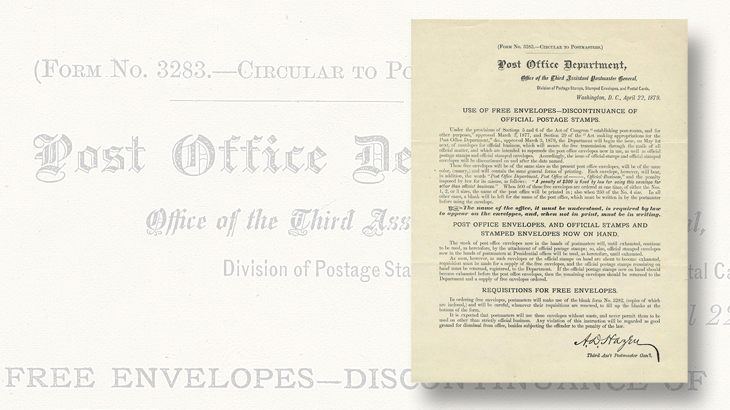 From the Huggins collection of Officials auction by Robert A. Siegel in May, an April 22, 1879, circular announcing the end of Official stamps and the start of penalty envelopes sold for $862.50. 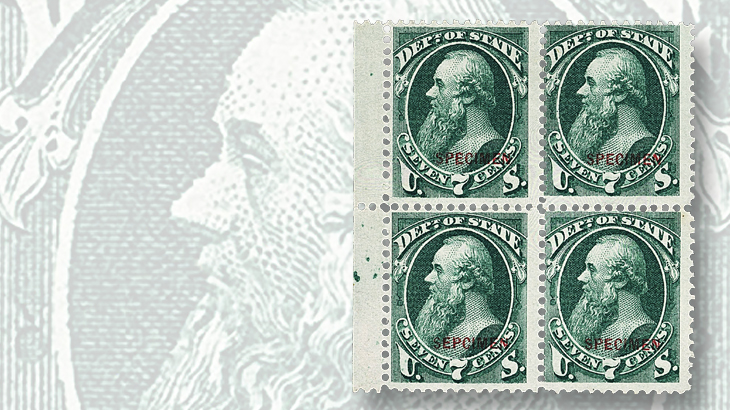 A block of four of the 7¢ Edwin M. Stanton Dept. of State 1875 reprint, with one stamp showing the “Sepcimen” error, sold for $21,850 in Siegel’s sale of the Huggins collection in May. 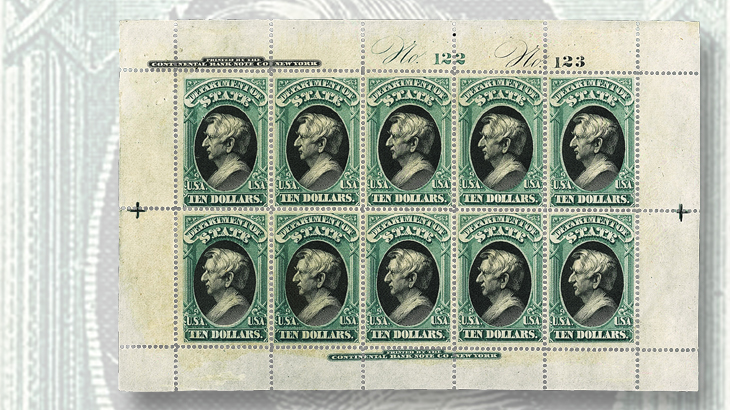 In May, Siegel offered the Rollin C. Huggins collection, including a mostly-mint complete sheet of 10 of the $10 Dept. of State stamp of 1873. In near-perfect condition, it brought $51,750. 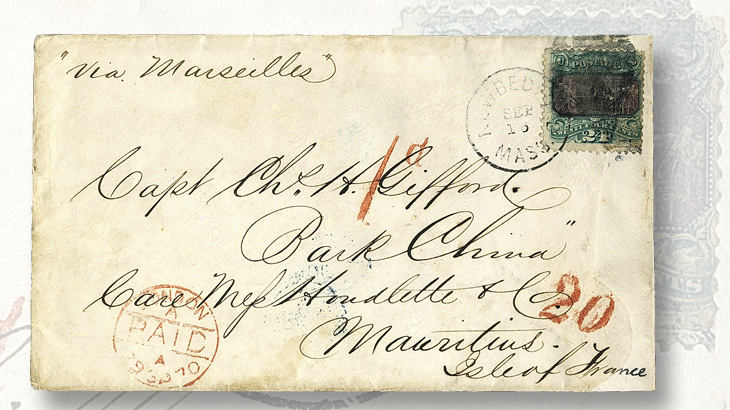 Siegel offered United States and Confederate postal history in an auction conducted May 5-6. The top seller was an 1870 cover franked with an 1869 24¢ stamp and addressed to Mauritius, the only known item with stamps of that issue sent to that island. It 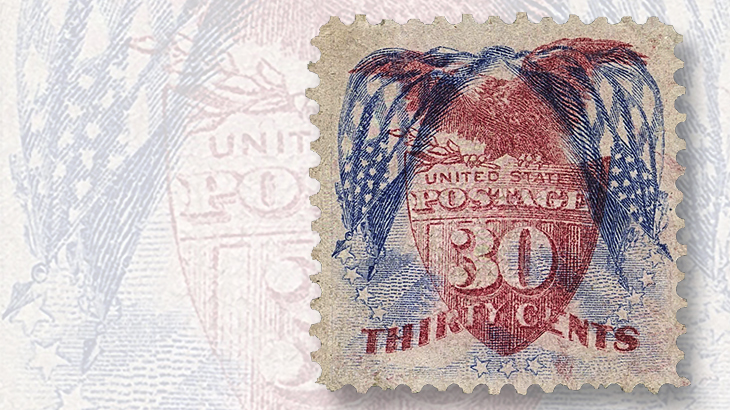 The top item from Robert A. Siegel’s sale of the Hanover collection in April was an unused example of the 30¢ Shield, Eagle and Flags invert from the 1869 pictorial series. One of only seven known, it sold for $310,500. 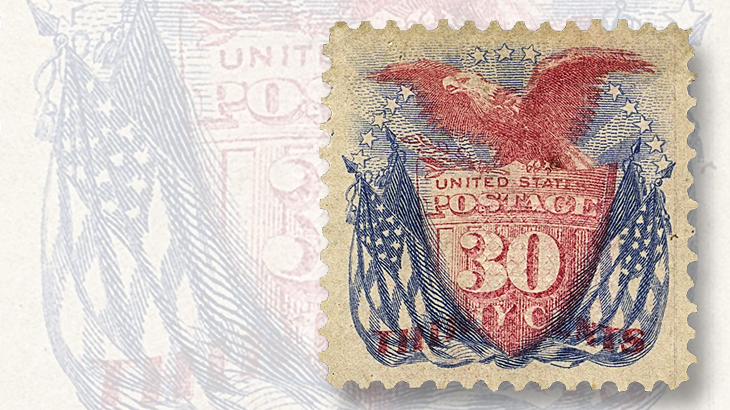 A 30¢ Shield, Eagle and Flags stamp graded extremely fine-superb 95 — “one of the finest two or three” extant — sold for $40,250 at Siegel’s sale of the Hanover collection in April. 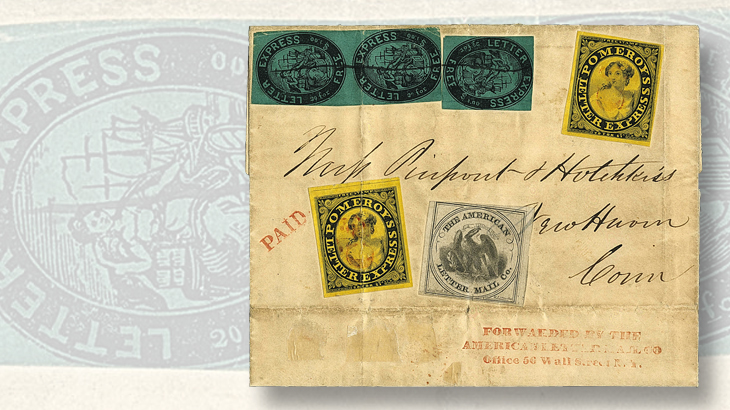 From Siegel’s auction of the Puliafito collection, a famous 1844 cover handled by three carriers and considered “the most valuable and important cover of the independent mail era” brought $32,200. It was its first time at auction. 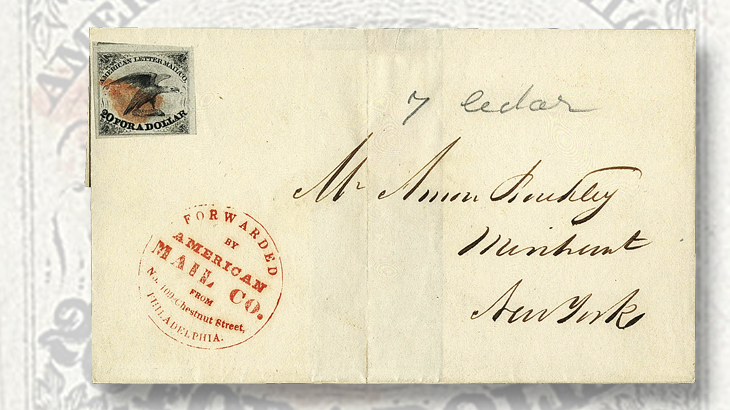 Robert A. Siegel offered the Dr. Carmen A. Puliafito collection of United States independent mails in May. This August 1844 cover carried by the American Letter Mail Co. sold for $402.50.
Previous
Next

Robert A. Siegel Auction Galleries offered several sales in April and May. The first part of the Hanover collection of superb-quality U.S. stamps was sold on April 7, followed by the Rollin C. Huggins collection of U.S. Official stamps on April 8. The Dr. Carmen A. Puliafito collection of U.S. independent mails crossed the block on May 4, and U.S. and Confederate postal history was offered May 5-6.

The Hanover sale, called “one of the top dozen of its kind in the annals of philately,” featured top-graded 19th-century U.S. stamps, which the owner had collected in mint never-hinged condition wherever possible.

The top stamp was an unused example of the 30¢ Shield, Eagle and Flags with flags inverted from the 1869 pictorial series (Scott 121b).

Only seven examples of this error are known unused. Only one has original gum; the other six, including the one in the Hanover sale, are without gum. The Hanover example, the o.g. example, and possibly one other are the only sound ones — making this a very rare stamp.

Beautifully centered and with nice color, it sold for $310,500, including the 15 percent buyer’s commission added by Siegel to all lots.

A magnificent, right-side-up example of the same issue (Scott 121), with original gum and spectacular margins, was graded extremely fine-superb 95 by the Philatelic Foundation. Siegel described the stamp as “one of the finest two or three” extant. It sold for $40,250, handily exceeding its Scott U.S. Specialized catalog value of $28,500 for an o.g. example in that grade.

From the 1898 Trans-Mississippi issue, a 50¢ Western Mining Prospector stamp (Scott 291) graded as superb-98 by the Professional Stamp Experts (PSE) firm was offered by Siegel.

“This may well be the finest mint never-hinged example … in existence,” boasted the sale catalog, and it was hard to argue with that. No example of this stamp has been graded higher, and this is the only example to have attained that grade. It sold for $54,625.

An example of the Trans-Mississippi $1 Western Cattle in Storm stamp (Scott 292), in the same top grade, was accompanied by a charmingly frank note from the grading expert William A. Litle.

At the less stratospheric end of the spectrum, a lovely example of the 5¢ Grant stamp from the 1895 Bureau Issue with double-line watermark (Scott 270) fetched $345.

The Huggins collection of Officials had some outstanding multiples, including a mostly mint complete sheet of 10 of the $10 Department of State Official stamp of 1873 (Scott O70).

The State Dept. was the only cabinet department to issue large-size, bicolor high values, and of the four dollar-denominated stamps (all showing a black vignette of William H. Seward in a green frame) only the $10 and $20 survive in complete sheets, with just three known.

With seven of the stamps never-hinged and only a couple of small staple holes making the sheet anything less than perfect, it sold for $51,750.

The Official stamps were reprinted for collectors in 1875, without gum and overprinted “Specimen” to prevent their being used unofficially by anyone. One cliche in the plate that applied the overprints had a typo, reading “Sepcimen.”

A block of four of the 7¢ Edwin M. Stanton Dept. of State reprint, with one stamp showing the error (Scott O61Sa), was offered with the note that fewer than seven singles of this error are known. The block went for $21,850.

Perhaps even more interesting than the stamps were some of the ephemera items offered at the beginning of the Huggins sale.

A two-page Post Office Department circular dated May 15, 1873, announcing the abolition of the free-franking privilege enjoyed by officials and the introduction of Official stamps, served as a kind of “birth certificate” for this back-of-the-book stamp category. It sold for $862.50.

A similar circular dated April 22, 1879, announced the discontinuance of Official stamps in favor of “penalty” envelopes, those now-familiar items of postal stationery bearing the inscription, “Penalty for private use, $300” or words to that effect. This circular likewise sold for $862.50.

(It is interesting to note that the amount of this penalty has never been changed. Whereas once upon a time that would have been a very hefty penalty indeed, nowadays it is comparable to a typical traffic ticket.)

The Puliafito collection was described by Siegel president Scott R. Trepel as “the best that has ever been” of stamps issued by private firms legally operating alongside the government postal service in the 19th century.

Many firms tried, with mixed success, to supplement (and perhaps supplant) the government’s monopoly on mail throughout the 1800s, whether by serving places the government wouldn’t go or by providing a level of service the government couldn’t. Happily for collectors, many of these firms left a legacy in small adhesive labels and markings.

A detailed history of these firms, and early mail transport in general, can be downloaded free at siegelauctions.com/2016/1124/intro.pdf.

The Puliafito sale began with numerous covers from the American Letter Mail Co., founded by a man with the wonderful name of Lysander Spooner, which had offices in several eastern U.S. cities. The firm issued its first stamps in 1844, a year before Congress reformed postal regulations to establish cheap, universal postage, and three years before the first U.S. postage stamps were issued.

A perfect example of an independent mail item could be seen in a small, neat cover dated Aug. 6, 1844, and sent from Philadelphia to New York, franked with a small black-and-white label showing an eagle and the name of the American Letter Mail Co. and inscribed “20 for a Dollar” (Scott 5L1).

With a neatly penned address and crisp, handstamped cachet in red, the cover is a visual delight. It sold for $402.50.

An 1844 cover bearing the stamps of three different companies was “universally acknowledged to be the most valuable and important cover of the independent mail era,” according to Siegel.

It was sent from Cleveland to New Haven, Conn., for a total fee of 15¢, significantly less than the 25¢ that the post office would have charged at the time.

As the letter was handed off from one independent mail company to the next, new stamps were added to show that the postage had been prepaid and nothing should be charged to the recipient (it was then common to deliver letters with postage due).

It was carried first by the Wells Letter Express and franked with three of their 5¢ black on green glazed paper stamps (Scott 96L2), representing the total amount paid by the sender.

The letter was handed off in Buffalo to Pomeroy’s Letter Express, where two of that firm’s 5¢ black on yellow stamps were added (117L1).

Finally, in New York City, the letter passed to the American Letter Mail Co. (getting a 5L2 stamp) for its last leg, from New York to New Haven — by Long Island Sound steamboat, because the railway between those cities was not yet complete.

Although it is a well-known cover and has been illustrated in numerous articles and books, including the exhibition catalog for World Stamp Show–NY 2016, Siegel said it was the first time it had been offered at auction. It brought $32,200.

The Siegel sale of U.S. and Confederate postal history on May 5-6 included many fascinating items. The top-dollar item was an 1870 cover franked with an 1869 pictorial series 24¢ stamp (Scott 120) and addressed to Mauritius, the only known item with stamps of that issue sent to the Indian Ocean island. It sold for $16,675.

The latter stamp (Scott 18), which was accompanied by a line of Tibetan-script handwriting, was required because Tibet never joined the Universal Postal Union, so its stamps were not recognized outside its borders and postage of incoming mail could not be prepaid by the sender.

Although Tibet came under Chinese control in 1951, many aspects of life continued to be managed for several years by the local government, including delivery of mail. It is not known how many U.S.-Tibet mixed-franking covers exist, but there can’t be many. This one sold for $1,035 — several times its estimate.

Among Siegel’s Confederate States of America items, a rare, large-margined example of the 1863 10¢ Jefferson Davis stamp in a milky blue shade with framelines between the stamps (Scott 10a) was described as an extremely fine gem, graded XF-90 by PSE.

The framelines were cut into the copper printing plate as an aid in aligning the dies of the stamps; each pair of stamps shared the frameline between them, so single stamps showing a frameline on all sides are highly elusive, valued by the Scott U.S. Specialized catalog at several times the price of a run-of-the-mill example. This one, used with a neat, double-circle cancel, brought $6,900.