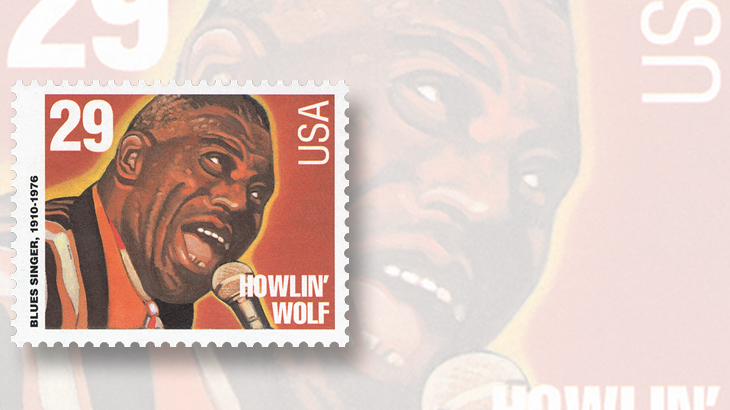 The 29¢ Howlin' Wolf stamp from 1994 is part of the Legends of American Music series.

“Wolf changed his name soon after learning his guttural ‘Howlin’ style from country blues man Charley Patton and harmonica from Sonny Boy Williamson,” the United States Postal Service noted in promotional material issued when the 29¢ stamp honoring Howlin’ Wolf (Scott 2861) was issued in 1994. Some sources claim the name was bestowed on young Chester by his grandfather.

“Howlin’ Wolf brought the Delta blues up from the South and into the limelight of Chicago and London,” the Postal Service said. “Armed with a harmonica and acoustic guitar, Wolf’s primary instrument was his voice. Many of his recordings laid the foundation for the golden age of rock and roll.”

Howlin’ Wolf played in clubs during the 1940s, and began recording in the 1950s, moving to Chicago in 1952. He continued to perform and record up until his death in 1976 following complications that developed from kidney surgery.

The Howlin' Wolf stamp is part of the Jazz and Blues Musicians set in the Legends of American Music commemorative series.