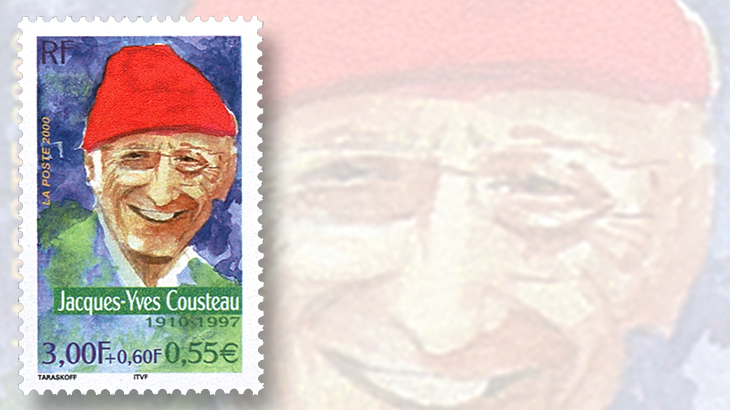 French explorer and environmentalist Jacques Cousteau, on a French semipostal stamp issued in 2000.

French underwater explorer and conservationist Jacques Cousteau was born June 11, 1910, in Saint-Andre-de-Cubzac, in the French commune of Gironde. He gained international fame through his discoveries, and with the broadcast of his initial television series, The Undersea World of Jacques Cousteau, from 1966 to 1975.

Cousteau’s fascination with the sea grew during his service in the French navy as a gunnery officer. With Emile Gagnan, he developed the commercially viable Aqua-Lung for scuba diving, which was patented in 1943.

After leaving the French navy in 1949, Cousteau converted the former British Royal Navy minesweeper Calypso into a research vessel. The ship was built in Seattle, Wash., and launched in 1942.

His first book, The Silent World, was published in 1953, and turned into a successful documentary film in 1956.

Because of his efforts to promote ocean conservation and expand awareness of the undersea world, Cousteau was named a commander of the Legion of Honour in 1972, and was awarded the U.S. Presidential Medal of Freedom by President Ronald Reagan in 1985.

Jacques Cousteau died June 25, 1997. He has been honored on numerous stamps worldwide, including a 3-franc+60-centime semipostal issued by France on Sept. 16, 2000.