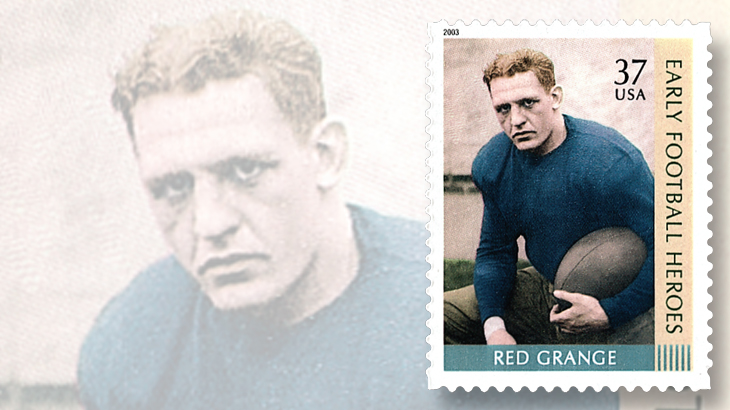 Harold Edward “Red” Grange, born June 13, 1903, came to be known as “The Galloping Ghost” in his role as halfback for the University of Illinois football team. Born in Forksville, Pa., Grange later moved with his family to Wheaton, Ill., where he excelled in sports at Wheaton High School.

Grange was a three-time All-American at Illinois, scoring 31 touchdowns in 23 games and rushing for 3,637 yards. He left to join the Chicago Bears in 1925 as the relatively new National Football League was still feeling its way.

Grange played briefly for the rival American Football League, but a knee injury knocked him out of the 1928 season. He returned to the Bears in 1929, and though slowed by his injury, he continued to be a leading rusher for the pro team and a top defender. His popularity with fans helped ensure the success of professional football in its early years.

When his career ended in 1934, Grange became a radio and television announcer. He died in 1991.