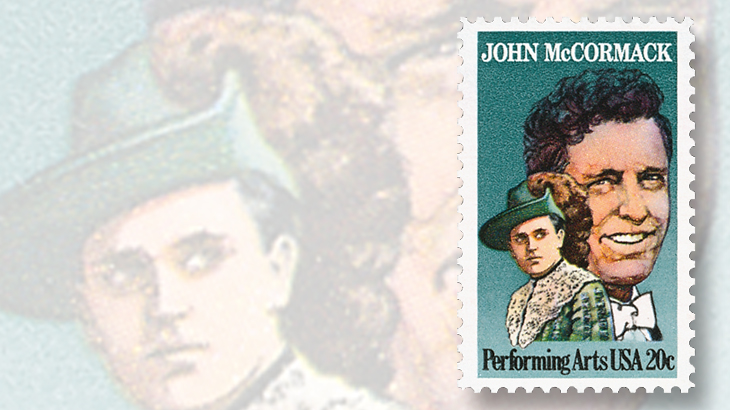 Irish-American tenor John McCormack, honored in 1984 on a 20¢ commemorative in the Performing Arts series.

A joint issue of the United States and Ireland on June 6, 1984, honored Irish-American tenor John McCormack.

After a very brief stint as a postal clerk, McCormack joined the Palestrina Choir of the Pro-Cathedral in Dublin. His operatic debut came in London in 1907, and he performed with the Manhattan Opera Company in 1909, and the Boston Opera Company beginning in 1910.

His fame grew as did his repertoire, and he performed in concerts around the world and found success in the relatively new media of commercial recordings. He was made a papal count in 1928, and embarked on a farewell tour in 1938.

The 20¢ U.S. stamp honoring him (Scott 2090) is a vertical commemorative in the Performing Arts series. The U.S. and Irish stamps share similar designs consisting of a large portrait by American artist Jim Sharpe, and a smaller scene by Irish artist Ron Mercer of McCormack as Edgardo di Ravenswood in Donizetti's Lucia di Lammermoor.