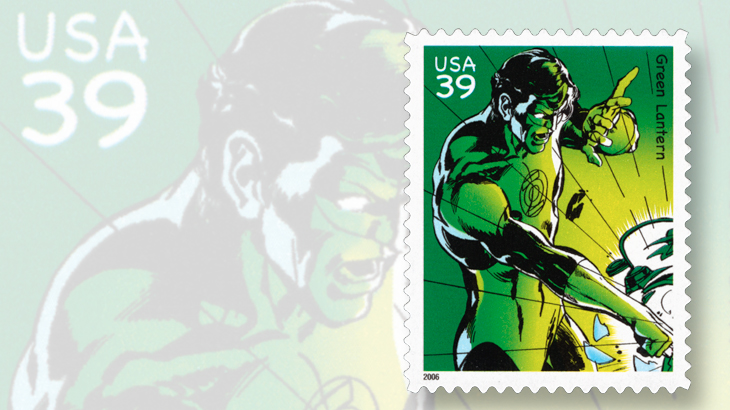 An illustration by comic book artist Neal Adams, on the 39¢ Green Lantern stamp issued in 2006.

Neal Adams is one of the most respected comic book artists in history. Born June 15, 1941, in New York City, Adams studied at the School of Industrial Art (now the High School of Art and Design) in Manhattan. After graduation he found work with Archie Comics, and later began drawing a Ben Casey daily comic strip and working as a commercial artist.

Adams began contributing to DC Comics in the mid-1960s and was soon drawing its famous superhero characters, including Batman. Within a few years he was also drawing for rival Marvel Comics, revitalizing its X-Men title.

At DC, Adams and writer Dennis O’Neil were giving a bold new look to established characters including Batman, Green Arrow, and Green Lantern. Over the years, Adams has completed covers and interior art for many of the most popular DC and Marvel characters.

Adams and artist/editor Dick Giordano founded the art studio and production company Continuity Studios in 1971. Adams was inducted into the Will Eisner Comic Book Hall of Fame in 1998.

Adams’ dramatic illustration of Green Lantern was featured on a 39¢ stamp in the DC Comics Super Heroes set of 20 issued July 20, 2006 (Scott 4084b). Printed on the backing paper for the Green Lantern stamp is this text: “Green Lantern/Art by Neal Adams/In 1970, writer Dennis O’Neil and artist Neal Adams launched a new era of relevance in comics, crafting stories in which the Green Lantern — accompanied by his friend, Green Arrow — addressed important issues then considered taboo for the typical ‘comic book.’”

In 2014, Neal Adams’ artwork appeared on the Batman with Bat Signal forever stamp (Scott 4933) issued as part of a set of eight stamps commemorating the 75th anniversary of Batman.