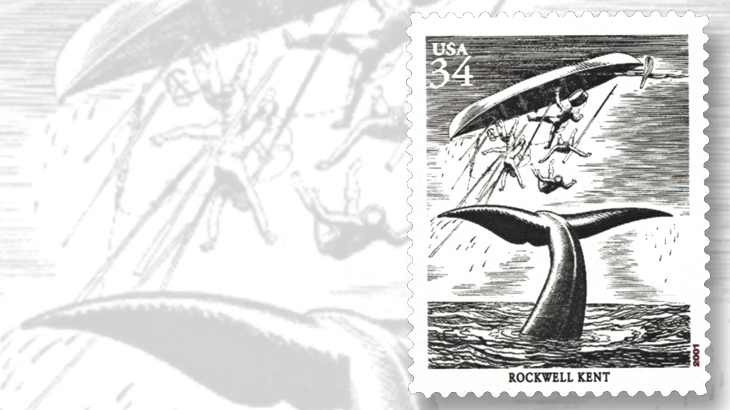 A 34¢ stamp from the 2001 American Illustrators set honors Rockwell Kent.

The United States Postal Service issued a set of 20 34¢ stamps honoring American illustrators on Feb. 1, 2001. Among the artists celebrated was Rockwell Kent, who was born June 21, 1882, in Tarrytown, N.Y.

Kent is represented in the set by an illustration from a 1930 edition of Herman Melville’s novel Moby Dick (Scott 3502q).

On the reverse of the stamp liner is printed this description: “Rockwell Kent (1882-1958) was a versatile wood engraver, lithographer, book illustrator, painter, and muralist. He designed a striking edition of Herman Melville’s Moby Dick, and wrote and illustrated accounts of his rugged travels in Alaska, Greenland, and South America. From Moby Dick, Random House, 1930.”

After initially studying architecture at Columbian University, Kent attended the New York School of Art, where he studied with Robert Henri along with another well-known artist, Edward Hopper, who was just one month younger than Kent.