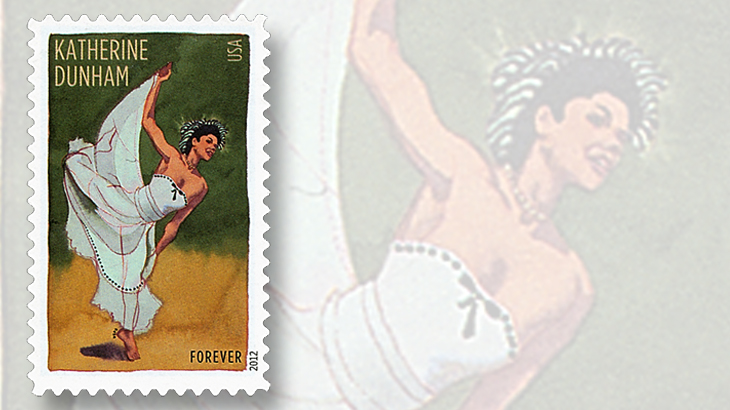 Choreographer and dance innovator Katherine Dunham, honored on a forever stamp issued in 2012.

Katherine Dunham, a choreographer, teacher, and dance researcher, was born June 22, 1909, in Chicago, Ill., and lived in nearby Glen Ellyn. Her father was black and her mother was French-Canadian with Native American heritage.

As a youngster, Dunham developed interests in both writing and performing, including dance. In college she studied anthropology and began research on the dances of the African diaspora.

She formed a dance company in 1930, and three years later she opened a dance school, the Negro Dance Group, in Chicago. During the 1930s, she continued her anthropological research, and developed innovative modern dance techniques that combine ballet with elements of Caribbean and African dance.

She was successful well into the 1960s as a choreographer for stage and in films. Her many accolades included a Kennedy Center Honor in 1983.

Dunham was featured on a forever stamp issued July 28, 2012, as part of the Innovative Choreographers set (Scott 4700). The U.S. Postal Service called her “one of the most enduring influences on contemporary culture.”