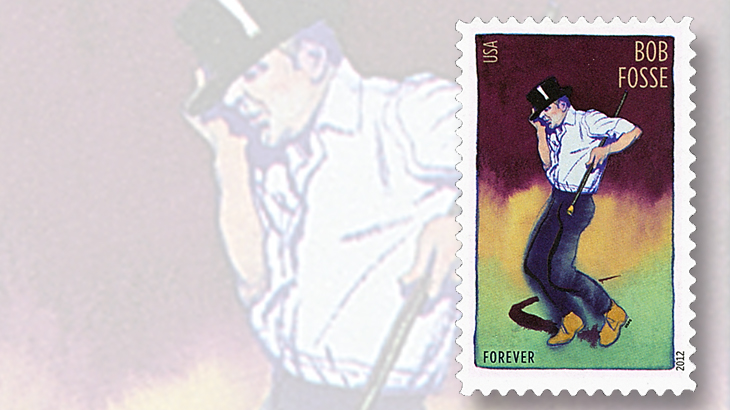 Bob Fosse was honored on a forever stamp in the Innovative Choreographers set issued July 28, 2012.

Legendary choreographer Bob Fosse was born Robert Louis Fosse on June 23, 1927, in Chicago, Ill. Fosse took dance lessons as a youngster and pursued a career in dance following his service in the U.S. Navy during World War II.

His career path took him from dancing in films to choreographing for the stage and for motion pictures. He directed the musical Redhead on Broadway in 1959, and Neil Simon’s Sweet Charity on film in 1969. His 1979 film All That Jazz was based on his own life. Over the years he would collect 10 Tony Awards, and an Oscar in 1973 for best director for Cabaret. He died in 1987.

Bob Fosse was honored on a forever stamp issued July 28, 2012, in the Innovative Choreographers set (Scott 4701). The United States Postal Service wrote, “Bob Fosse was one of the 20th century’s great choreographers. As an artist, Fosse was known for his thoroughly modern style, a signature one could never mistake for anyone else’s. Snapping fingers are omnipresent, so are rakishly tilted bowler hats. Both hip and shoulder rolls appear frequently, as do backward exits. Swiveling hips and strutting predominate, as do white-gloved, single-handed gestures.”