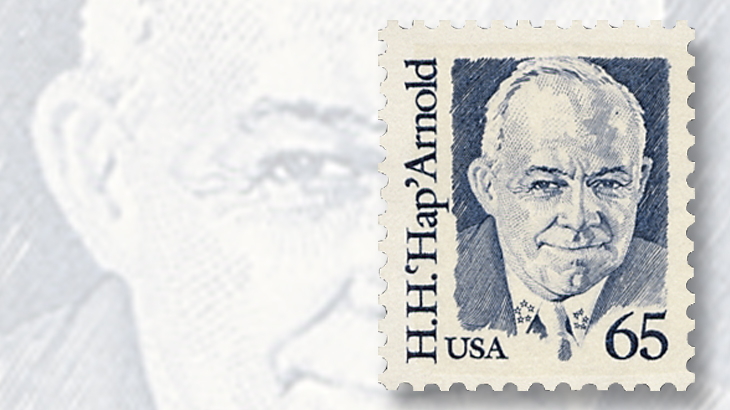 Arnold was born Henry Harley Arnold on June 25, 1886, in Gladwyne, Pa. He entered West Point as a cadet in 1903 and graduated with the class of 1907. After serving in the Philippines, Arnold was assigned to flight instruction at the Wright Brothers’ Aviation School. He was one of the first pilots to carry mail by airplane, and also was the first to send a telegraph message from air to ground.

“Throughout the ‘20s and ‘30s, Arnold continued to make aviation history, stretching the limits of technology and endurance,” the Postal Service wrote in its 1988 philatelic release. “Along with other young Signal Corps officers like William ‘Billy’ Mitchell, Arnold became a tireless advocate of a military role for aircraft beyond the traditional one of supporting ground forces.”

When the United States Army Air Forces were created in 1941, Arnold was chosen to lead it through World War II. In 1944, he was promoted to General of the Army, and he left active duty in 1946.