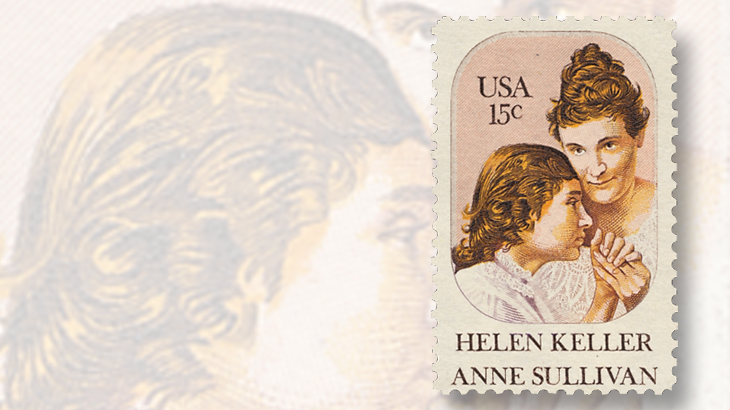 Helen Keller and her teacher Anne Sullivan were commemorated on a 15¢ stamp in 1980.

Helen Keller, born June 27, 1880, in Tuscumbia, Ala., lost the ability to see and hear following an illness at just 19 months old, and remained blind and deaf throughout her life.

She was taught by her longtime companion Anne Sullivan, hired in 1887 by Keller’s parents to help their six-year-old daughter cope with her world and learn to communicate. Sullivan did so by using patterns of touch in Keller’s hand to spell single words corresponding to objects she knew. The famous first success that helped Helen connect the sensation in her hand with the objects around her was when Sullivan spelled out the word “water” while holding Helen’s other hand under running water from a hand pump.

“That living word awakened my soul, gave it light, hope, joy, set it free!” Keller wrote in The Story of My Life in 1903. “There were barriers still, it is true, but barriers that could in time be swept away.”

Keller learned to speak and to write, and she attended the Cambridge School for Young Ladies in 1896, and graduated from Radcliffe in 1904.

Keller wrote numerous essays and articles for magazines, and became a famous public face for the American Foundation for the Blind. She was also involved in political matters as a committed pacifist and a supporter of socialist policies. She traveled the world as a goodwill ambassador, encouraging efforts to improve opportunities for those without sight.