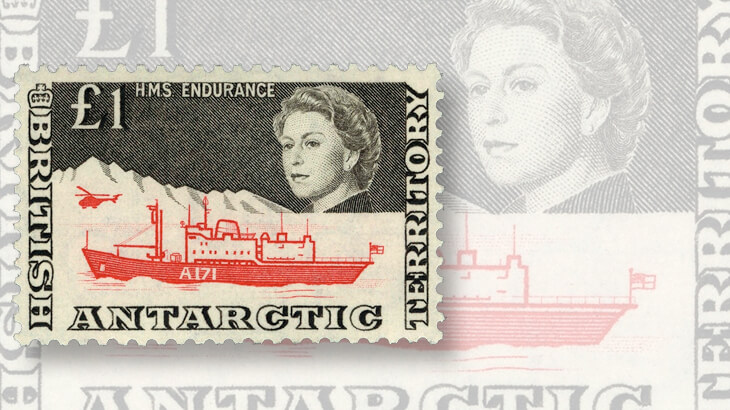 The 1969 British Antarctic Territory £1 HMS Endurance and Helicopter stamp (Scott 24) is a key issue for this British overseas territory and is a good buy in mint never-hinged condition at around $100.

Britain came early to the intrepid field of polar exploration. Names such as James Clark Ross, Robert Falcon Scott, and Ernest Shackleton conjure up romantic images of man against the elements in a battle of survival for science and humanity. Scientific study of the poles is ongoing, but it is a good deal more prosaic nowadays.

One of the major bases for the study of Antarctica is the British Antarctic Territory. Established in 1908, it comprises a 660,000 square-mile, wedge-shaped chunk of the icebound continent running from the Antarctic Peninsula to the South Pole.

There is no permanent human population, but it is dotted with a number of research stations occupied by an estimated 250 scientists and technicians.

As a British overseas territory, British Antarctic Territory has issued its own stamps since the first set of 15 definitives (Scott 1-15) on Feb. 1, 1963. On Dec. 1, 1969, the set was expanded by the issuance of a £1 HMS Endurance and Helicopter stamp (Scott 24). The 2017 Scott Standard Postage Stamp Catalogue values the stamp in mint never-hinged condition at $190.

This stamp is considered the key issue of British Antarctic Territory and is in steady demand from topical collectors, as well as country and British Commonwealth collectors. It is selling in mint never-hinged condtion at $100 and up and is an excellent buy at that price.