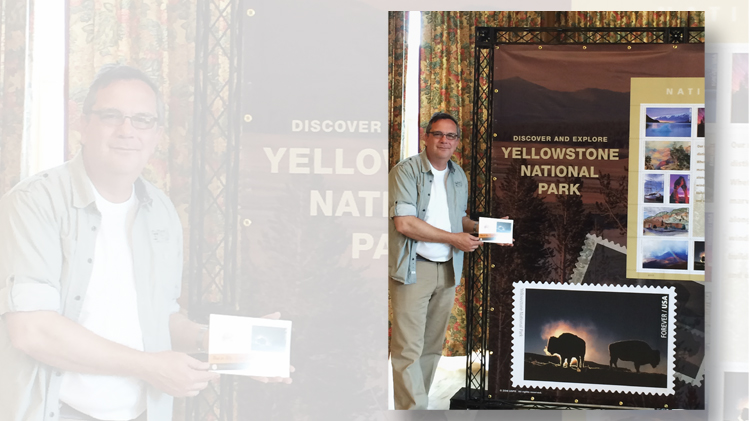 Chris Lazaroff reached his goal of attending a first-day ceremony in all 50 states on June 2, at the Wyoming dedication for the Yellowstone stamp in the National Park Service Centennial pane of 16. He attended his first ceremony in 1982.

He is the first person known to have done this.

“I attended my first ceremony in 1982 at APS Stampshow in Milwaukee, Wis.,” Lazaroff said in a recent interview with Linn’s.

At first, attending ceremonies was a casual pursuit for him, when the events were close by or otherwise convenient.

However, when Northwest Airlines ran a special promotion of a free flight after two paid flights, Lazaroff said “that started me on a journey back in 1989, until June 2 of this year, to complete the quest.”

June 2 was the day the United States Postal Service issued its National Park Service Centennial stamps, with first-day ceremonies in 14 of the 16 parks. Lazaroff had needed a Wyoming ceremony for some time, so he left World Stamp Show-New York 2016 to fly to Yellowstone National Park for the dedication of that park’s stamp.

In fact, Lazaroff made the arrangements for the Oct. 11, 2014, ceremony for the release of the new variety of the Purple Heart stamp (Scott 2704a), at a one-day club show in Dover.

“I have helped arrange and put on first-day-of-issue and first-day-of-sale ceremonies to get a couple of states that I wanted knocked off,” he admitted.

And what was the best ceremony he attended?

Another standout ceremony was that for the Wonders of the Sea issue (Scott 2863-2866, Oct. 3, 1994), because the ceremony was held underwater at a shipwreck site in Honolulu, and he was able to wangle a spot aboard the submersible rather than watching the ceremony on a video feed.

Lazaroff likes to say that “the worst first-day ceremony is always better than the best day at work,” but a possible exception was the Andy Warhol stamp (Scott 3652) dedication in 2002 in Pittsburgh. Its features included only 27 chairs for the audience, an open bar and speakers advancing causes that had nothing to do with either stamps or Warhol.

Achieving his goal of 50 states doesn’t mean the end of Lazaroff’s attendance at first-day ceremonies. “When we finally admit our 51st state,” he says, “the Postal Service, I know, will have a stamp for that [milestone] in that state. I will be there.”

“I’ve always loved their covers. I think they’re really interesting and they’re popular with our customers,” Sundman told Linn’s. “I really bought it for the inventory to sell to my existing first-day customers.”

However, he has no plans to continue the line of silk- cacheted covers.

“They’re pretty expensive to produce and their customer base had kind of dwindled to a very small number, so it’s not economical,” Sundman said. “But if we can get our costs down, I’d like to try making a few special issues and see if it’s popular enough to cover the cost to make some.

“So I may do it from time to time but never every issue,” he continued. “I wish I could, but there aren’t enough customers.”