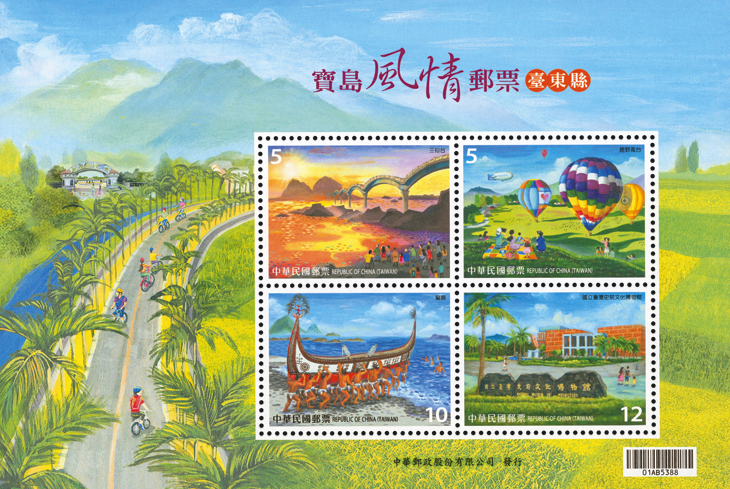 The first souvenir sheet in a new Taiwan Scenery series was issued April 24. The four se-tenant stamps and the selvage depict destinations in Taitung County located in eastern Taiwan. 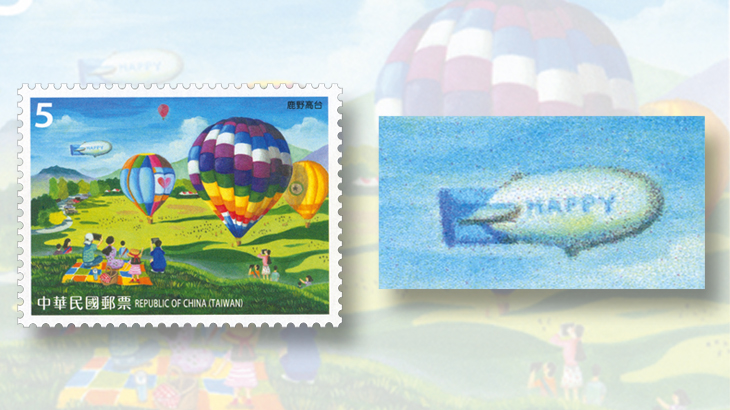 The word “happy” is inscribed on the blimp shown in the upper left of this NT$5 Taiwan Scenery stamp featuring the International Hot Air Balloon Fiesta in the Luye Highlands. 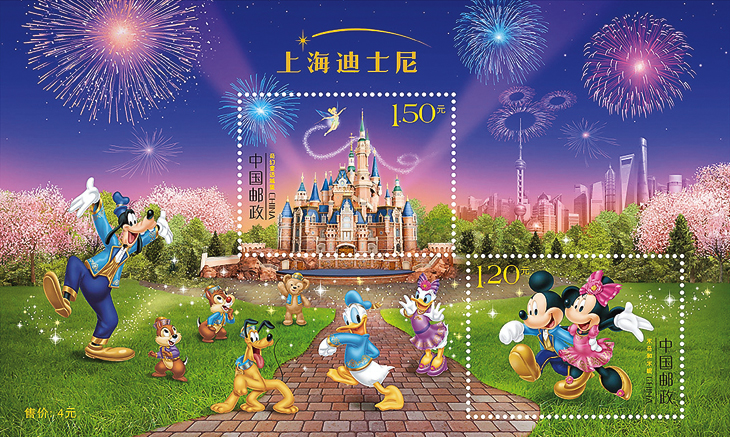 A souvenir sheet from China celebrates the June 16 grand opening of the Shanghai Disney Resort.
Previous
Next

Glover described the $1.50 stamp as depicting “the grandeur of the world’s largest and most interactive Disney castle, with Tinker Bell soaring overhead and fireworks lighting the night sky above.”

The Beijing Postage Stamp Printing Works printed the stamps in a souvenir sheet of two and in a pane of eight with the designs se-tenant.

The selvage of the pane of eight features an image of Snow White holding a bird and silhouettes of Mickey Mouse’s ears and the Disney castle against a starry sky.

The selvage of the souvenir sheet continues the designs of the two stamps depicting additional Disney characters, fireworks, and the Shanghai skyline.

Bob Iger, chairman and chief executive officer of the  Walt Disney Co., said: “The grand opening of Shanghai Disney Resort is a celebration of creativity and collaboration, a triumph of imagination and innovation, and a testament to the strong partnership between Disney and China.

“Together we have created an extraordinary destination, a magical place unique in all the world, where East meets West, the past meets the future, and anything is possible for those who believe. It is our sincere hope that this spectacular place will inspire wonder and create joy for the people of China for generations to come.”

Scenic paintings of Taitung County on the eastern coast of Taiwan are displayed on a souvenir sheet of four se-tenant stamps issued April 20. This souvenir sheet is the first in a new series called Taiwan Scenery.

In introducing this series, Taiwan’s Chunghwa Post Co. said that its purpose was “to encourage the people of Taiwan to explore the island’s colorful landscapes.”

The top two stamps in the sheet are each denominated NT$5.

The stamp on the right shows the beach at Sanxiantai, an arched footbridge, and rock formations. The people on beach are watching the first sunrise of the new year.

The stamp on the left represents the International Hot Air Balloon Fiesta in Luye Township. This year’s festival is taking place July 1-8. If you look closely at the design, you can see that the dirigible in the upper left is inscribed with the word “Happy.”

The ceremonial launching of a traditional Yami boat on Lanyu (Orchid Island) is pictured on the NT$10 stamp in the lower left. The Yami construct their boats using interlocking planks.

Shown on the NT$12 stamp in the lower right is the National Museum of Prehistory in Taitung City. The area was selected for the site of the museum after prehistoric remains were discovered there in 1980.

The selvage of the sheet pictures the bike path in Guanshan.