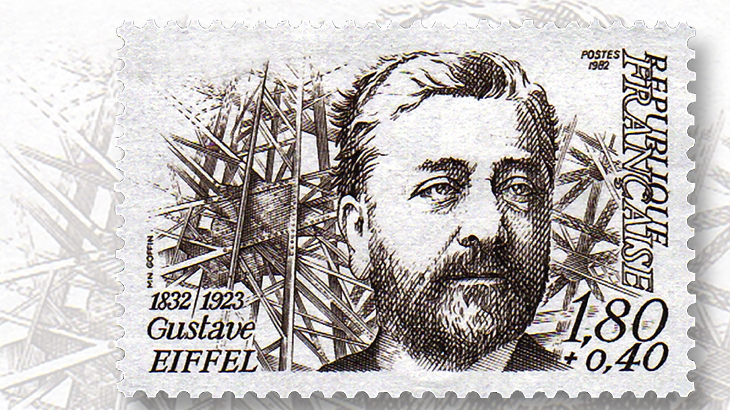 This stamp commemorates the 150th anniversary of the birth of Gustave Eiffel: engineer, businessman, and designer and builder of the Eiffel Tower. 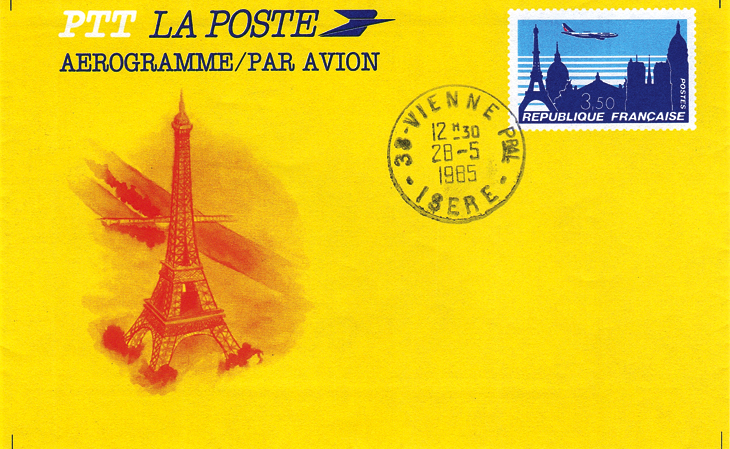 The Eiffel Tower appears on postal stationery of France, such as this 1985 aerogram that features the tower as its decorative image. 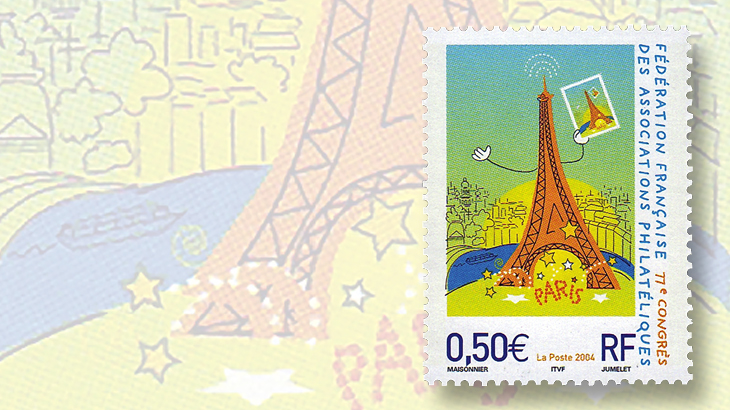 Another humanized Eiffel Tower appears on this stamp honoring a philatelic congress. The stamp includes an image of itself. 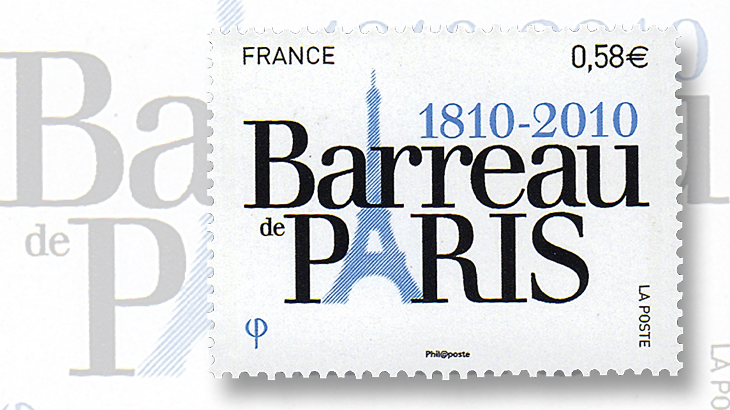 The lower part of the Eiffel Tower forms the letter “A” in “Paris” on this stamp commemorating the 200th anniversary of the Paris Bar Association. 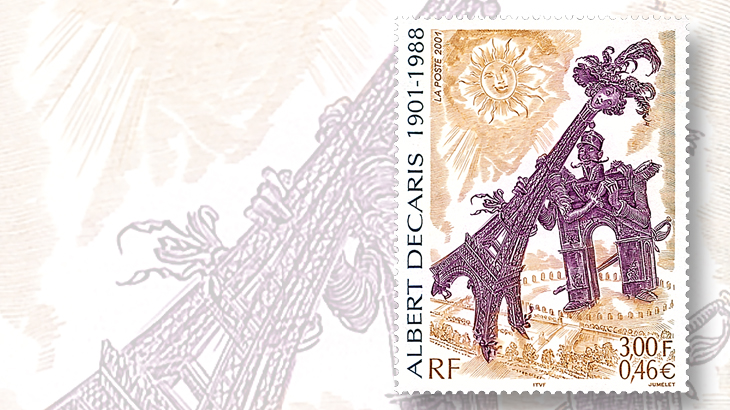 This whimsical design of the Eiffel Tower dancing with the Arc de Triomphe is a tribute to artist and engraver Albert Decaris on the 100th anniversary of his birth. 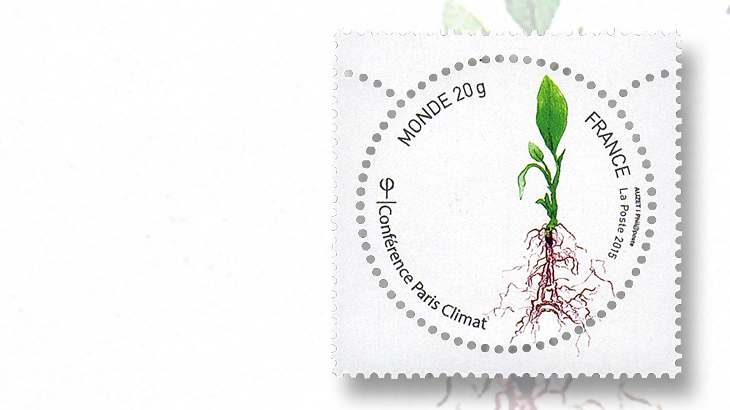 A plant whose root forms the Eiffel Tower symbolizes the connection between nature and civilization on this round stamp marking the 2015 Paris Climate Conference. 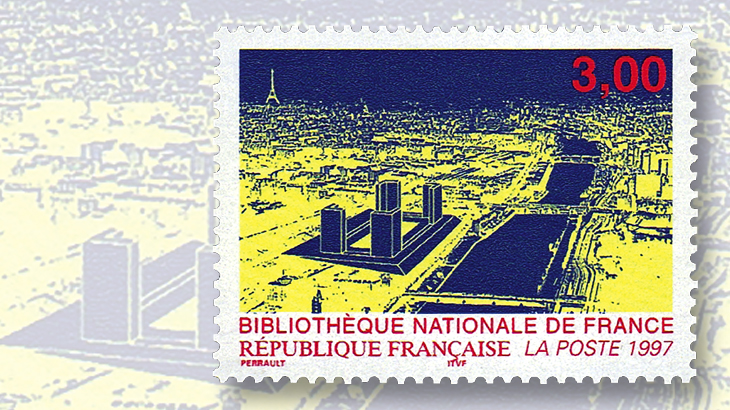 A tiny Eiffel Tower can be seen at the upper left on this 3-franc stamp issued Dec. 14, 1996, to honor the National Library of France. 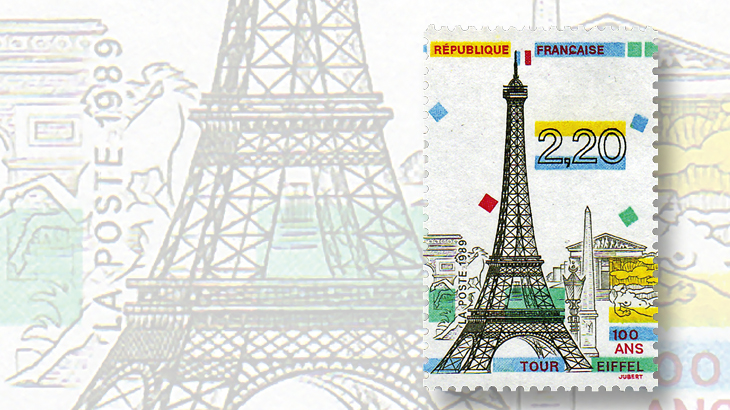 The 100th anniversary of the Eiffel Tower was honored in 1989 by this stamp, one of a se-tenant strip of five featuring famous monuments of Paris. 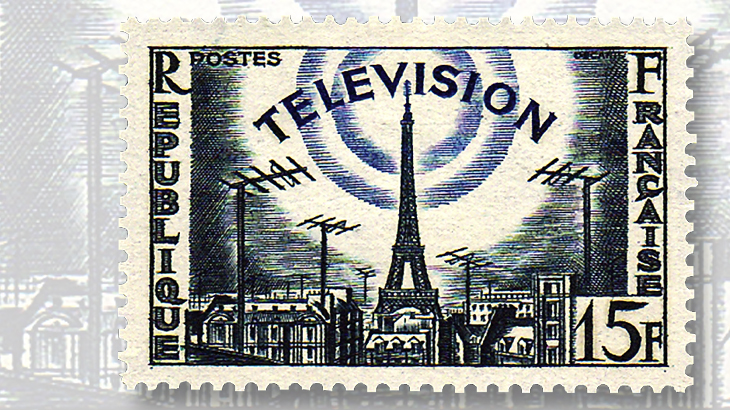 Besides its role as a tourist attraction, the Eiffel Tower serves as the location for radar, radio, and television antennas. This stamp marks the addition of television in 1955. 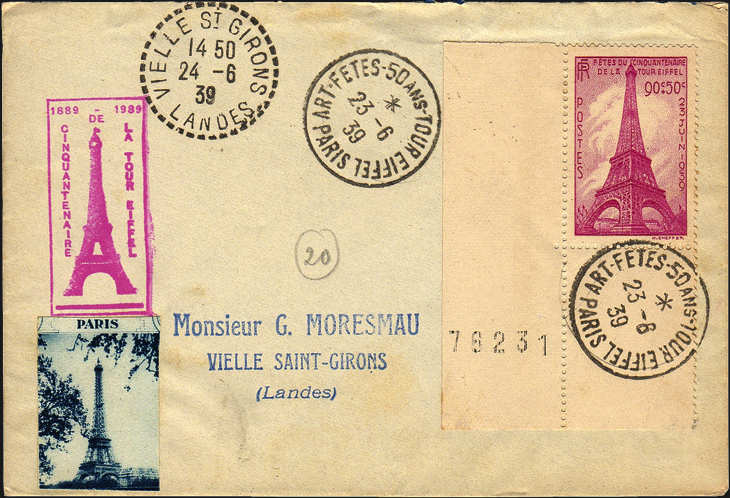 The first stamp to feature the Eiffel Tower was a semipostal issued in 1939 to mark its 50th anniversary. This cover has a commemorative cancel and two small cachets picturing the tower. 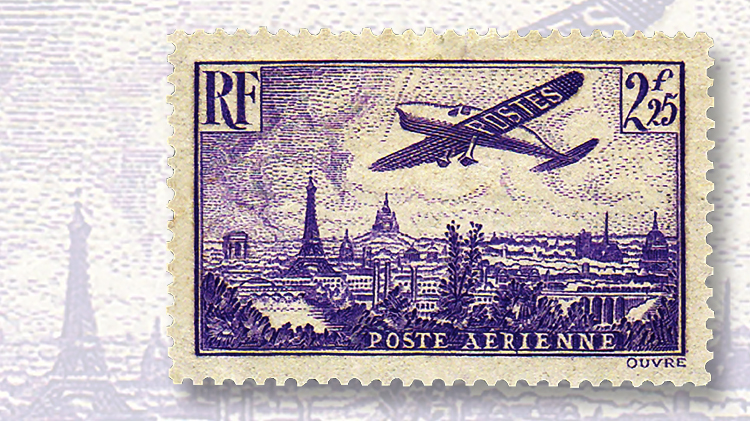 The first French stamps to picture the Eiffel Tower were issued in 1936. This is one of the seven airmail stamps in that set. 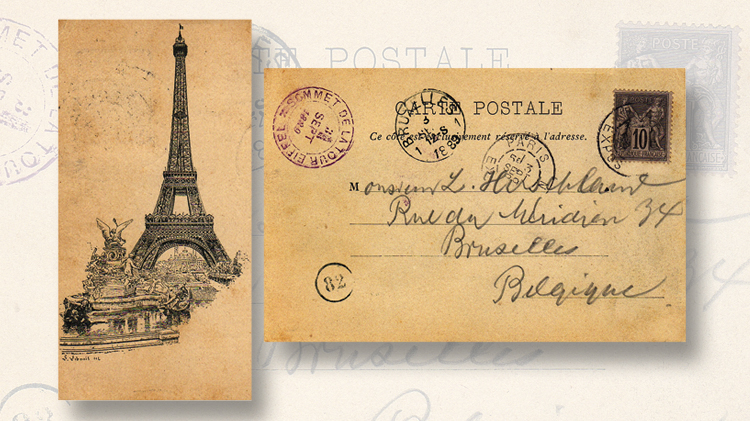 This postcard is a souvenir of a visit to the top of the Eiffel Tower in September 1889, the year in which the tower opened as an entryway to the Exposition Universelle. The reverse side, left, has a picture of the Eiffel Tower with space for the message. 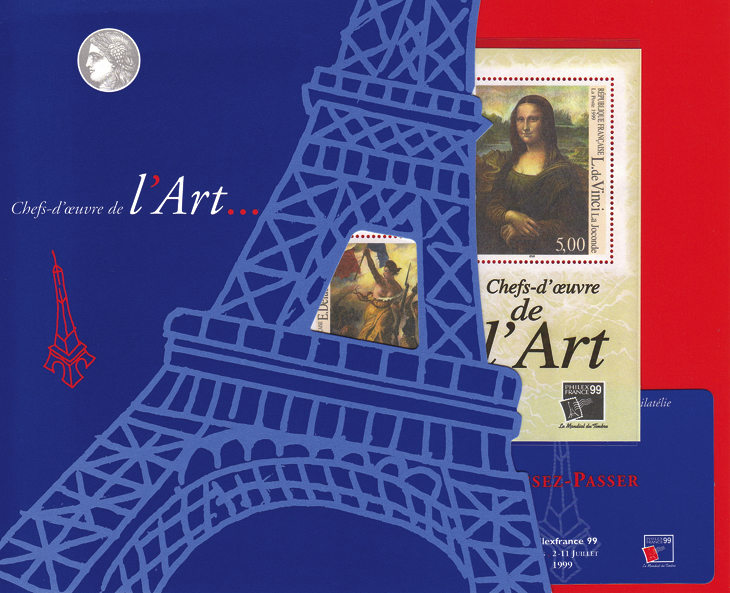 The Eiffel Tower is the main feature of the cover of this folder from the 1999 Philexfrance stamp exhibition. Inside the folder is a Masterpieces of Art souvenir sheet issued for the show and an entry pass. A cutout in the tower reveals one of the stamps
Previous
Next

In the early 1880s, France was successfully recovering from its defeat in the Franco-Prussian War. In order to show the world that France was again healthy and active, the French decided to hold a world’s fair in 1889, the 100th anniversary of the start of the French Revolution.

This would be the 10th Exposition Universelle and would be held on the west side of Paris along the Seine. The Fair Commission wanted a striking project that would show off France’s leadership and skills. They decided on a 300-meter (about 1,000 feet) tower designed by Gustave Eiffel that would serve as an entryway to the fair. Eiffel was honored on a 1.80 franc+0.40fr semipostal stamp (Scott B546) in 1982 on the 150th anniversary of his birth.

Eiffel, then in his 50s, was already a successful engineer and businessman. He had built docks, harbors, bridges, and other structures requiring the use of steel, including the interior scaffolding of the Statue of Liberty.

Typically, such a bold proposal was extremely controversial. A group of artists submitted a petition to the Fair Commission that read in part:

“We, writers, painters, sculptors, architects and passionate devotees of the hitherto untouched beauty of Paris, protest with all our strength, with all our indignation in the name of slighted French taste, against the erection … of this useless and monstrous Eiffel Tower.”

The Commission stuck to its plans. The tower was completed in May 1889 and remained the tallest structure in the world for 40 years. Although it was originally scheduled to be dismantled after 20 years, the French realized its usefulness for radio (and later television) antennas and retained it.

The end of the story is, of course, well known. The Eiffel Tower proved to be a success and has drawn millions of tourists to Paris. Parisians came to love the tower, and it became — and still is — a symbol of France known all over the world.

During the 1889 fair, visitors sent picture postcards featuring the tower. Shown nearby is a card franked with the 1877 10-centime Peace and Commerce issue (Scott 91) and mailed Sept. 3, 1889, to Brussels, Belgium.

At the top left is a postmark-like cachet that reads “Sommet de la Tour Eiffel” (Summit of the Eiffel Tower), indicating a visit to the third level at 905 feet above the ground. The back of the postcard has a picture of the tower with space for the message.

The first French stamps to picture the Eiffel Tower were a set of airmails issued in 1936 (Scott C8-C14). The common design is an airplane flying over Paris with the Eiffel Tower visible in the distance. The tower also appears on another airmail issued that year (Scott C15) with a similar vignette.

Three years later, the Eiffel Tower got its own stamp to mark its 50th anniversary. The stamp (Scott B85) was a 90c+50c semipostal, with the extra 50 centimes used to help pay for the celebration. The stamp is shown here on a cover with two small cachets, one handstamped and one glued on, showing the tower. The cancellation, just touching the stamp and repeated to its left, notes the anniversary.

The tower was the central feature of a 15fr stamp in 1955 (Scott 766) marking the addition of a television antenna to the tower. It is the collection of radio, television, and radar equipment at the top that raises the height of the tower over the 1,000-foot mark. Without them, it would be merely 984.3 feet (300 meters) high.

With the increasing number of colorful commemorative stamps starting in the 1960s, the Eiffel Tower has appeared often, sometimes as a main design element and other times in the background. A complete list would be very lengthy, so some of the interesting ones are described here.

The centenary of the Eiffel Tower was celebrated in a rather low-key way in 1989 with the tower shown on one of a strip of five se-tenant stamps picturing famous monuments of Paris (Scott 2148).

The Eiffel Tower has a starring role in a fanciful design honoring artist and engraver Albert Decaris (Scott 2841). Designed and engraved by Claude Jumelet, the 2001 3fr stamp pays homage to Decaris’ sense of humor and shows the Eiffel Tower as a woman dancing with a male Arc de Triomphe, another famous Paris landmark.

France has been generous about promoting philatelic events with stamps, many of which have included the Eiffel Tower. The E0.50 issue for the 77th Congress of the French Federation of Philatelic Associations in 2004 shows a humanized Eiffel Tower holding a copy of the stamp (Scott 3039).

Perhaps the smallest Eiffel Tower on a French stamp appeared in 1997 on a 3fr commemorative for the National Library of France (Scott 2551). The tower is on the horizon at the upper left.

For variety, some designers work the Eiffel Tower into the design in an unusual way. The 2010 E0.58 stamp for the Paris Bar Association (Scott 3905) uses the bottom part of the tower to represent the letter “A” in “Paris.”

The most recent appearance of the Eiffel Tower was on a stamp issued last December to note the Paris Climate Conference. The design shows a young plant whose roots form the Eiffel Tower, symbolizing the link between man and nature.

The Eiffel Tower has appeared on other postal products besides stamps. On an aerogram from 1985, the tower appears on the indicium and is the subject of the cachet.

Another example is the cover of a folder issued for the Philexfrance stamp show in 1999. A cutout in the tower shows part of the Masterpieces of Art souvenir sheet issued for the show (Scott 2713).

One thing we can be sure of is that the Eiffel Tower will continue to appear on French postal products as long as it is admired and recognized all over the world.

Read more about the stamps of France: