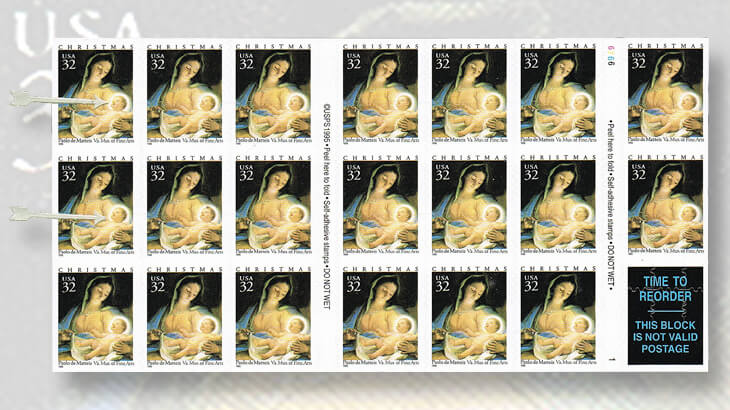 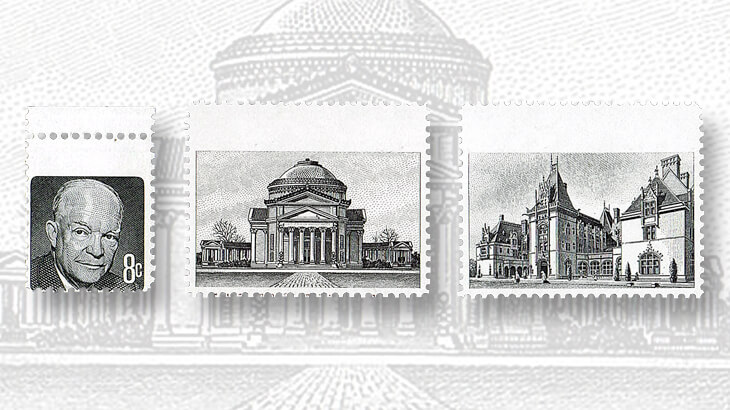 A horizontal perforation shift on the 8¢ Eisenhower stamp cuts off the red and gray-blue “Eisenhower USA” inscription, a cataloged error. The 18¢ Architecture stamps have a similar perforation shift. On first glance, they look like color-missing errors. H
Previous
Next

A letter from Mike Wenkel highlights a set of expertizing opinions that are completely understandable - and also completely wrong. He also shows how valuable it can be to submit additional information when an opinion is received that the submitter believes is wrong.

Here is Wenkel’s letter: “I can use some help on getting a stamp issue resolved. Scott lists color omitted errors that result from perforation shifts. See the attached image of my 1996 32¢ religious Christmas stamp booklet, the 32¢ Paolo de Matteis’ Madonna and Child, Scott 3112.

“I claim (and know) that the only engraved portion of this stamp is the black lettering at the bottom. Thus, as the horizontal die cuts are displaced 7 millimeters upward from the normal position between the stamps, this is a misperf that results in the engraved black being missing.

“But all three of the expert services say there is black elsewhere, which isn’t the issue. The lettering at the top and the main design have black that is lithographed. So, what do I have to do to get them (APS, PF or PSE) to re-consider.”

The annual Linn’s U.S. Stamp Yearbook series is my bible for U.S. stamps issued from 1983 to 2010, when the series ended. I went to the 1996 volume, authored by George Amick. Its entries describe the printing for both the sheet and booklet versions of the 32¢ Madonna and Child from Adoration of the Shepherds, by Paolo de Matteis stamp. And, on page 280, it clearly states: “This line [artist name and ‘Va. Mus. Of Fine Arts’] of small type is the only engraved element on the stamp. The picture and the word ‘CHRISTMAS’ are printed by offset.”

Apparently, none of the expertizers involved checked this reference, instead assuming all the black on this stamp was produced from a single plate.

Indeed, one would have to ask the question why this is not so? Amick does not answer that question, but I have a theory. Offset printing of the word “CHRISTMAS” worked fine because of the size of the letters. However, offset printing of small letters and numbers would not have resulted in the desired crisp rendering of the letters, so intaglio was used to enhance the aesthetics of the stamp.

Having established that Wenkel was correct, what next? As I wrote back to him: “The question I have is whether Scott would list this when what is left after the misperf is less than a full stamp design. In theory, one could take any copy of the stamp from your booklet and make an example that looks like a top row ‘missing color’ (though it would not be easy to replicate the die cuts). That would not prevent me from certifying it, but I would say that it would be best collected as an intact booklet.”

So, I posed the question to Kloetzel, who decides on the addition of missing-color errors to the Scott U.S. Specialized catalog, and he agreed that the missing engraving should be added as a listing to Scott 3112, showing it as the result of a perforation shift.

Next, I talked with Mercer Bristow at the American Philatelic Society’s Expertizing Service (APEX). He agreed that if Wenkel resubmitted the booklet, APEX would reverse the previous opinion.

All’s well that ends well, but it took a little doing.

I preach the value of philatelic literature in this series of columns on expertizing; especially the reference works on U.S. stamp issues. Yes, they divert some money from filling spaces in my album, but they are absolutely essential to the serious U.S. stamp collector.

Shown nearby are two examples of the more routinely seen missing colors caused by perforation shifts. Both the 1971 8¢ Eisenhower (Scott 1394) and the 18¢ 1981 American Architecture stamps (1928-1929) have perforations shifted 5 millimeters and 6mm high. As a result of this, the 8¢ Eisenhower is entirely missing the gray-blue and red “Eisenhower USA” at the bottom. It is a catalog-listed error (Scott 1394d).

The 18¢ American Architecture pair is a different kettle of fish. You get extra credit if you noticed that there are bits of the red inscription on the bottom perfs. Thus it is not a color-missing error, which by definition has to be 100 percent missing. It is not catalog listed. Close but no cigar!